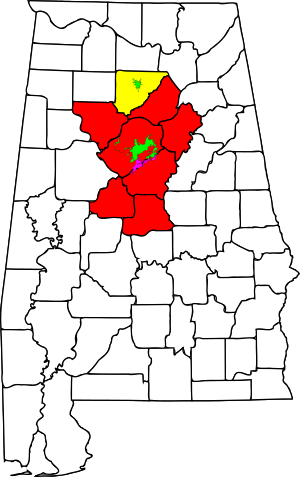 As of 2013, the federal government defines the Birmingham-Hoover, AL Metropolitan Statistical Area as consisting of seven counties (Bibb, Blount, Chilton, Jefferson, St. Clair, Shelby, and Walker) centered on Birmingham.[1] The population of this metropolitan statistical area as of the 2010 census was 1,130,047, making it the 49th largest metropolitan statistical area in the United States as of that date. According to the United States Census 2013 estimate, the metro area has a population of 1,140,300.

Suburbs with more than 10,000 inhabitants

The economy of Greater Birmingham is the most diversified of any metropolitan area in Alabama. Many of the region's major employers are located in Birmingham and Jefferson County. The economy of Birmingham ranges from service industries such as banking and finance to health-related technological research and heavy industry. The University of Alabama at Birmingham (UAB) is Alabama's largest employer as well as the area's largest, with some 20,000 employees. The area is world headquarters for Regions Financial, one of the nation's top 10 banks, and Books-A-Million, the second largest book retailer in the United States.

Birmingham is known as the shopping destination in the state of Alabama. It includes the major retail destination for the region, the Riverchase Galleria mall, along with several other shopping centers and malls.

Birmingham received $87 million from the US Congress to help fund a regional transportation system. However, no progress has been made. The only form of regional mass transit is the Birmingham-Jefferson County Transit Authority (BJCTA) bus system, which has been severely underfunded.[citation needed]

There have been proposals to build a major international airport in the Greater Birmingham area to serve as a relief airport for Atlanta, but no official plans have been made.[citation needed]