Black January (Azerbaijani: Qara Yanvar), also known as Black Saturday or the January Massacre, was a violent crackdown in Baku on January 19–20, 1990, pursuant to a state of emergency during the dissolution of the Soviet Union.

President Gorbachev and Defence Minister Yazov asserted that military law was necessary to stop the violence against the Armenian population and to thwart efforts by the Azerbaijani independence movement to overthrow the Soviet Azerbaijani government. According to official estimates between 133 and 137 Azerbaijani civilians died, 800 people were injured and 5 persons went missing. However unofficial number put the number of victims at 300 dead. Later on, in 1995 Gorbachev apologised to Azerbaijan by stating: "The declaration of a state emergency in Baku was the biggest mistake of my political career.[citation needed]

In December 1989, Azerbaijanis living in regions bordering Iran ripped down border fences, demanding closer ties with ethnic Azerbaijanis living in Iran. The local authorities in Jalilabad surrendered to rioters, turning over administration to the Popular Front of Azerbaijan. This was followed by a non-violent turnover of the Lankaran administration to the Popular Front two weeks later.[2]

On January 9, 1990, the Supreme Soviet of the Armenian SSR voted to include Nagorno-Karabakh in its budget and allowed its inhabitants to vote in Armenian elections, thus disregarding Soviet authority and Azerbaijani jurisdiction and causing rage throughout Azerbaijan.[3] This led to demonstrations which demanded the ousting of Azerbaijani communist officials and called for independence from the Soviet Union. Their rhetoric was, according to a Human Rights Watch report, "heavily anti-Armenian".[4] On January 12, the Popular Front organised a national defence committee with branches in factories and offices in Baku to mobilise people for battle with Armenians.[2]

Local Azerbaijani authorities were unable to restore order because of internal quarreling and divisions that paralyzed their ability to act.[5] Azerbaijani authorities also ordered the 12,000-strong Interior Ministry troops to abstain from intervening in the Baku riots[6] and numerous Soviet army and fleet units of the Baku garrison and Caspian Flotilla did not intervene to stop the riots, claiming that they had no orders from Moscow authorities.[2] On 13 January, massive anti-Armenian pogroms started which resulted in ninety deaths, while thousands fled or were evacuated by the Soviet military.[7]

On January 15, the authorities declared states of emergency in other parts of Azerbaijan (but not in Baku). At the same time, fearing an intervention of the central Soviet authorities, Popular Front activists began a blockade of military barracks.[4] They had already taken de facto control in a number of Azerbaijani regions.[4]

On January 18, the Popular Front ordered supporters to barricade the main access routes into Baku using hundreds of cars, trucks and buses. The next day, Soviet authorities evacuated its representatives and local officials, moving them to military command posts in the outskirts of the city where Soviet Minister of Defence Dmitry Yazov and Interior Minister Vadim Bakatin were positioned.[2]

On 19 January, the Presidium of the Supreme Soviet of the USSR approved the decree signed by M. Gorbachev, introducing state of emergency in Baku and some other places in the Azerbaijani SSR. The decree stated:

[8] The decree contravened legal acts in force at the time, which provided that the Presidium of the Supreme Soviet of the AzSSR would have to turn to the central government with the relevant plea.[9]

Late at night on January 19, 1990, after demolition of the central television station and termination of phone and radio lines by Soviet special forces, 26,000 Soviet troops entered Baku, smashing through the barricades in order to crush the Popular Front.[3] As claimed by Mikhail Gorbachev, gunmen of the Azerbaijani National Front opened fire on the soldiers;[10] however, findings of the Moscow-based non-governmental organisation Shield found no evidence of "armed combatants of Azerbaijani Popular Front", which was used as a motive to crush the civilian population on January 20.[11]

The independent Shield organisation which consists of a group of lawyers and officers in reserve, observed human rights violations in the army and its military operations,[12] concluded that the army waged a war on its civilians and demanded to start a criminal investigation against the Minister of Defence, Dmitry Yazov, who had personally led the operation.[7] The Azerbaijani Interior Ministry officials helped Popular Front activists in stirring disorder by providing them with weapons, technical facilities, and informing them about the movement of army units.[13]

The troops attacked the protesters, firing into the crowds. The shooting continued for three days. They acted pursuant to a state of emergency, which continued for more than four months afterward, declared by the Presidium of the Supreme Soviet of the USSR, signed by President Mikhail Gorbachev. The state of emergency was, however, disclosed to the Azerbaijani public only several hours[4] after the beginning of the offensive, when many citizens already lay dead or wounded in the streets, hospitals and morgues of Baku.

Almost the whole population of Baku turned out to bury the dead on the third day, January 22.[3] For another 40 days, the country stayed away from work as a sign of mourning and mass protest.[4]

According to one report, 93 Azerbaijanis and 29 Soviet soldiers were killed in the street skirmishes. Other reports state that 21 soldiers were killed and 90 wounded in the fighting.[14][15] However, how the soldiers died is still disputed. The soldiers' death toll was claimed by Soviet authorities to have resulted from armed resistance, although some of the soldiers could have been victims of friendly fire.[7]

Other estimates indicate that between 133[16] and 137[17] civilians died with unofficial number reaching 300.[18] Up to 800 were injured and 5 went missing.[19] An additional 26 people were killed in Neftchala and Lankaran regions of the country.[20]

President Gorbachev and other officials asserted that it was necessary to stop pogroms and violence against the Armenian population and to thwart efforts by extremists to overthrow the Azerbaijani government. The government's decree said: "Extremist groups are organizing mass disorders fanning national enmity. They are committing bold criminal acts, mining roads and bridges, shelling settlements, taking hostages." [21]

Defence Minister Yazov also said that nationalists were plotting a coup d'état in Azerbaijan: "A meeting was planned at which it was proposed to declare the transfer of power into the hands of the People's Front." He noted how the "Popular Front" declared its own state of emergency in Baku before the action was taken and how Soviet state organs "ceased to control the situation."[22][23][24][25] 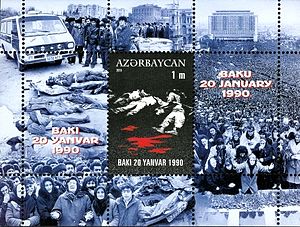 During the Black January crackdown, Soviet authorities managed to suppress all efforts to disseminate news from Azerbaijan to the local population and the international community. On the eve of the Soviet military invasion in Baku, one of leaders of Popular Front, Ekhtibar Mamedov proposed to Kremlin officials to appear on Azerbaijani TV at 8 PM announcing First Secretary of Azerbaijani Communist Party, Abdurrahman Vazirov would be leaving and no troops would invade Baku which would restore the order.[2]

Instead, an energy supply source to Azerbaijani TV and State Radio was blown up by intelligence officers at 7:15 PM in order to cut off the population from any source of information. TV and radio was silent and all print media was banned.[19] But Mirza Khazar and his staff at Radio Free Europe/Radio Liberty succeeded in broadcasting daily reports from Baku,[26] making it the only source of news to Azerbaijanis within and outside of the country for several days. The Kremlin leadership tried hard to keep the outside world and the population inside Azerbaijan unaware of the military invasion, but Mirza Khazar and his staff foiled this attempt. Thanks to Mirza Khazar and his staff at Radio Liberty, Azerbaijanis in and outside Azerbaijan, as well as the international community, learned about the Soviet invasion and gained a chance to organise protest actions.

Shocked by this "surprising" development, the government of the USSR complained officially to the United States about Radio Liberty's[27] coverage of the military invasion of Azerbaijan. The January 20, 1990 broadcasts turned Mirza Khazar into a legend among Azerbaijanis in and outside Azerbaijan. Malahat Aghajanqizi, a well-known Azerbaijani poetess and writer, described Mirza Khazar's appearance on radio at the time of the Soviet military invasion as follows: "On January 20, Mirza Khazar with his God-given divine voice, gave hope to the dying Azerbaijani people."[28]

A special session of the Supreme Soviet of the Azerbaijan SSR was held on January 22, 1990 at the request of the public and by initiative of a group of MPs. It tried to initially assess the January 20 events and adopted some documents condemning the crackdown operation by Soviet army.

The Memorial Society and Helsinki Watch reported in May 1991 that they had found compelling evidence that the imposition of the state of emergency had led to an unwarranted breach of civil liberties and that Soviet troops had used unjustified force resulting in many deaths.[29] This includes the usage of armoured vehicles, bayonets and firing on clearly marked ambulances.[29]

The Human Rights Watch report entitled "Black January in Azerbaijan" states: "Indeed, the violence used by the Soviet Army on the night of January 19–20 was so out of proportion to the resistance offered by Azerbaijanis as to constitute an exercise in collective punishment. Since Soviet officials have stated publicly that the purpose of the intervention of Soviet troops was to prevent the ouster of the Communist-dominated government of the Republic of Azerbaijan by the nationalist-minded, noncommunist opposition, the punishment inflicted on Baku by Soviet soldiers may have been intended as a warning to nationalists, not only in Azerbaijan, but in the other Republics of the Soviet Union."

"The subsequent events in the Baltic Republics - where, in a remarkable parallel to the events in Baku, alleged civil disorder was cited as justification for violent intervention by Soviet troops - further confirms that the Soviet Government has demonstrated that it will deal harshly with nationalist movements", continues the Human Rights Watch report.

The Wall Street Journal editorial of January 4, 1995 claimed that Gorbachev chose to use violence against "independence-seeking Azerbaijan." When a year later the world press criticized Gorbachev for violent massacres of civilians in Lithuania and Latvia, Azerbaijani public was embittered for the silence of the world media on Gorbachev's orders a year earlier, during Black January.[30]

On October 18, 1991, the Azerbaijan parliament restored the country's independence. On February 14, 1992, the Azerbaijani General Prosecutor's Office instituted a probable cause targeted at the individuals involved in the massacre. In March 2003, the same probable cause was targeted at the ex-Soviet president Gorbachev for violating the article 119 of the Soviet Constitution and article 71 of the Constitution of the Azerbaijani SSR. Gorbachev later apologised to Azerbaijan in 1995 by stating: "The declaration of a state emergency in Baku was the biggest mistake of my political career". In 1994, the National Assembly of Azerbaijan adopted a full political and legal evaluation of the Black January events. According to the decree of the President of Azerbaijan Heydar Aliyev from December 16, 1999, all victims of the crackdown were awarded an honorary title of the "Martyr of January 20" (Azerbaijani: 20 yanvar şəhidi).

January 20 is marked as Martyrs' Day (or literally, "the Day of the Nationwide Sorrow") in Azerbaijan.[31][32]

In January 2010, a Memorial for the Black January victims was erected in the Yasamal district of Baku. The monument was designed by Javanshir Dadashov and Azad Agayed, and architect Adalat Mammadov. The opening of the monument took place on 20 January 2010. The President of Azerbaijan Ilham Aliyev and the head of the presidential administration Ramiz Mehdiyev, chief executive of Yasamal Ibrahim Mehdiyev and families of the victims of the tragedy attended the ceremony. The total area of the complex is 1,500 km ². The height of the monument and pedestal is 8m.. The memorial depicts a group of people who are determined not to miss armed troops into the city, some of them had already fallen.[33][34][35]

This event is commemorated as a public holiday on January 20 in Azerbaijan.