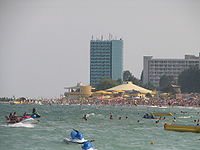 The Romanian Black Sea resorts stretch from the Danube Delta in the north down to the Bulgarian Black Sea Coast in the south, along 275 kilometers of coastline.

The most important resort is Mamaia, situated north of the city of Constanța on a narrow land slice that separates the Black Sea and Lake Siutghiol. Mamaia is a popular destination in the summer for Romanians and foreign tourists alike as a result of major investments in tourist infrastructure.

Other important resorts have names from Roman and Greek mythology, such as Eforie Nord, Neptun, Venus, Saturn, Jupiter and Olimp.

Costinești is the traditional students' resort, while Vama Veche, in the extreme south bordering Bulgaria, is a fishing village well known for its hippie atmosphere.

The main cities in the region are Constanța (Romania's largest port), Mangalia, Năvodari and Sulina. In Tulcea County the largest resort is Gura Portiței.

The Romanian Black Sea Riviera is served by Constanța Airport which is connected to the main European capitals through charter flights during the summer season.