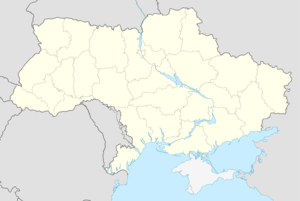 Lua error in Module:Coordinates at line 668: callParserFunction: function "#coordinates" was not found. The Black Sea Shipyard (Ukrainian: Чорноморський суднобудівний завод; Russian: Черноморский судостроительный завод) is located in Mykolaiv, Ukraine and is the largest shipyard with near direct access to the Black Sea. It is most often referred to as the Nikolayev South Shipyard and was known as Soviet Shipyard No. 444.

As of 2008 the shipyard is a major enterprise consisting of shipbuilding, machine-building, and metallurgy. The shipyard has its own design center with a qualified engineering staff and modern computer equipment. Their integrated shipbuilding system (FORAN) includes computer-aided design (CAD), engineering (CAE), and manufacturing (CAM) of vessels.[3]

On August 27, 1789, Prince Grigori Aleksandrovich Potemkin signed an order to construct a shipyard at the mouth of the river Inhul[citation needed]. The shipyard, simply called New Shipyard on the Ingul river, was to serve for the repair of the Russian Navy ships in the Russo-Turkish war.

Later[when?] Potemkin ordered the shipyard to be named Nikolaev, to commemorate the fall of the Turkish fortress Ozi-Cale (today Ochakiv) to the Russian troops under his command on December 6, 1788, on the day of Saint Nicholas (patron saint of seafarers)– according to the Russian Orthodox Church calendar.[4] 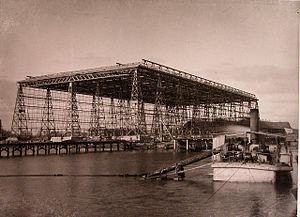 In 1897, the shipyard was established as the Nikolayev Shipbuilding, Mechanical, and Iron Works––a Belgian-owned enterprise. By 1898, it was constructing ships including the battleship Potemkin.[1]

Early in the Soviet era, the shipyard was renamed to the Andre Marti (South) Yard (Shipyard No. 198).[2] During these early years, the yard constructed surface warships and Dekabrist-class submarines.

In January 1938, the Chairman of the People’s Commissar Council, declared the following:[5]

Our mighty Soviet power must have such sea and ocean fleet that would comply with her interests and would be worthy of our great mission.

It was then the government introduced the 10-year Big Shipbuilding Program. The plan included the construction of battleships and heavy cruisers which would represent the ocean might and strength of the country.[5]

On October 19, 1940, the government decided to terminate battleship and heavy cruiser construction. It was ordered to concentrate all their efforts on small-size and medium-size warships building. However, the completion of ships of various classes, laid before, continued. On the whole, the Soviet shipbuilding was once again re-directed for submarines and light surface ships construction. Nevertheless,[5] By the 1950s, an estimated 65 Whiskey-class submarines, the Sverdlov-class light cruisers,[1] and the Stalingrad-class battlecruiser were built.[2]

The State joint stock company Chernomorsudoproekt is one of the leading ship design firms in Ukraine. The firm was founded in 1956 around the design personnel of Nikolayev shipbuilding enterprises.[7] The enterprise has built and exported vessels to Sweden, Bulgaria, Norway, Romania, Great Britain, Germany, Portugal, Kuwait, India and Greece.[3]

The shipyard has two main areas covering 500 acres (2.0 km2). The first slipway (No.0) has end-launch building ways and blocking docks. The second is a horizontal building slip (No.1) with a covered launch.[3]

The second slipway (No.1) is a flow-position line, which is located in the sheltered slipway and is actually a closed-loop autonomous production line. Launching of vessels is effected with the help of the floating dock. The final fitting-out is performed near the South outfitting quay which is 546 meters (1,791 ft).[3]

According to their public website, the shipyard also includes:[3] 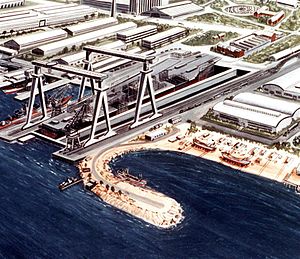 The Soviet aircraft carrier Ulyanovsk under construction at the Nikolayev Shipyard

There were many notable vessels constructed in this shipyard. The table below lists many of these vessels to include when they were laid and launched.

Notes: NATO class only shown if applicable; classes of vessels launched before 1949 are provided as originally designated. Most vessel names provided is the name given when launched–some ships may have since been renamed. The table uses the following shipbuilding terms: