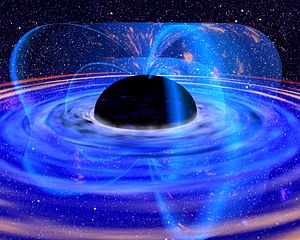 Artist's representation of a black hole

The black hole information paradox[1] is an observational phenomenon that results from the combination of quantum mechanics and general relativity which suggests that physical information could permanently disappear in a black hole, allowing many physical states to devolve into the same state. This is controversial because it violates a commonly assumed tenet of science—that in principle complete information about a physical system at one point in time should determine its state at any other time.[2][3] A fundamental postulate of quantum mechanics is that complete information about a system is encoded in its wave function up to when the wave function collapses. The evolution of the wave function is determined by a unitary operator, and unitarity implies that information is conserved in the quantum sense. This is the strictest form of determinism.

There are two main principles in play:[citation needed]

The combination of the two means that information must always be preserved.

Starting in the mid-1970s, Stephen Hawking and Jacob Bekenstein put forward theoretical arguments based on general relativity and quantum field theory that not only appeared to be inconsistent with information conservation but were not accounting for the information loss and state no reason for it. Specifically, Hawking's calculations[4] indicated that black hole evaporation via Hawking radiation does not preserve information. Today, many physicists believe that the holographic principle (specifically the AdS/CFT duality) demonstrates that Hawking's conclusion was incorrect, and that information is in fact preserved.[5] In 2004 Hawking himself conceded a bet he had made, agreeing that black hole evaporation does in fact preserve information. 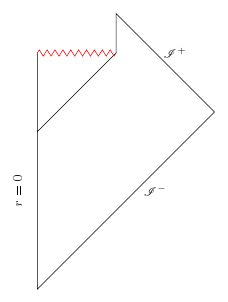 The Penrose diagram of a black hole which forms, and then completely evaporates away. Information falling into it will hit the singularity.[clarification needed] Time shown on vertical axis from bottom to top; space shown on horizontal axis from left (radius zero) to right (growing radius).

In 1975, Stephen Hawking and Jacob Bekenstein showed that black holes should slowly radiate away energy, which poses a problem. From the no-hair theorem, one would expect the Hawking radiation to be completely independent of the material entering the black hole. Nevertheless, if the material entering the black hole were a pure quantum state, the transformation of that state into the mixed state of Hawking radiation would destroy information about the original quantum state. This violates Liouville's theorem and presents a physical paradox.[citation needed]

More precisely, if there is an entangled pure state, and one part of the entangled system is thrown into the black hole while keeping the other part outside, the result is a mixed state after the partial trace is taken into the interior of the black hole. But since everything within the interior of the black hole will hit the singularity within a finite time, the part which is traced over partially might disappear completely from the physical system.[citation needed]

Hawking remained convinced that the equations of black-hole thermodynamics together with the no-hair theorem led to the conclusion that quantum information may be destroyed. This annoyed many physicists, notably John Preskill, who bet Hawking and Kip Thorne in 1997 that information was not lost in black holes. The implications that Hawking had opened led to a "battle" where Leonard Susskind and Gerard 't Hooft publicly 'declared war' on Hawking's solution, with Susskind publishing a popular book, The Black Hole War, about the debate in 2008. (The book carefully notes that the 'war' was purely a scientific one, and that at a personal level, the participants remained friends.[6]) The solution to the problem that concluded the battle is the holographic principle, which was first proposed by 't Hooft but was given a precise string theory interpretation by Susskind. With this, "Susskind quashes Hawking in [the] quarrel over quantum quandary".[7]

There are various ideas about how the paradox is solved. Since the 1997 proposal of the AdS/CFT correspondence, the predominant belief among physicists is that information is preserved and that Hawking radiation is not precisely thermal but receives quantum corrections.[clarification needed] Other possibilities include the information being contained in a Planckian remnant left over at the end of Hawking radiation or a modification of the laws of quantum mechanics to allow for non-unitary time evolution.[citation needed]

In July 2004, Stephen Hawking published a paper presenting a theory that quantum perturbations of the event horizon could allow information to escape from a black hole, which would resolve the information paradox.[8] His argument assumes the unitarity of the AdS/CFT correspondence which implies that an AdS black hole that is dual to a thermal conformal field theory. When announcing his result, Hawking also conceded the 1997 bet, paying Preskill with a baseball encyclopedia "from which information can be retrieved at will."[citation needed]

According to Roger Penrose, loss of unitarity in quantum systems is not a problem: quantum measurements are by themselves already non-unitary. Penrose claims that quantum systems will in fact no longer evolve unitarily as soon as gravitation comes into play, precisely as in black holes. The Conformal Cyclic Cosmology advocated by Penrose critically depends on the condition that information is in fact lost in black holes. This new cosmological model might in future be tested experimentally by detailed analysis of the cosmic microwave background radiation (CMB): if true the CMB should exhibit circular patterns with slightly lower or slightly higher temperatures. In November 2010, Penrose and V. G. Gurzadyan announced they had found evidence of such circular patterns, in data from the Wilkinson Microwave Anisotropy Probe (WMAP) corroborated by data from the BOOMERanG experiment.[9] The significance of the findings was subsequently debated by others.[clarification needed]

Information gradually leaks out during the black-hole evaporation[10][11]

Information is stored in a Planck-sized remnant[10][11]

Information is stored in a large remnant[14][15]

Information is stored in a baby universe that separates from our own universe.[11][16]

In 2014, Chris Adami, a physicist at the Michigan State University claimed to have solved the paradox.[19][19] Since absolute loss of information is not allowed by quantum physics, Adami argues that the "lost" information is contained in stimulated emission that accompanies the Hawking radiation emitted by blackholes.[20] His solution has not been confirmed.