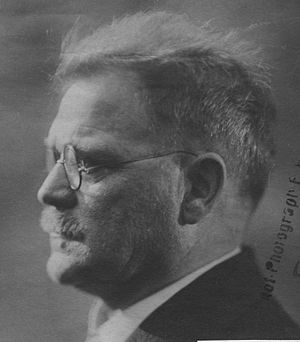 Blau gas (German: Blaugas) was an artificial illuminating gas similar to propane, named after its inventor, Dr. Hermann Blau[1][2] of Augsburg, Germany. It was manufactured by decomposing mineral oils in retorts by heat and compressing the resulting naphtha until it liquefied. It was transported in this condition, and like LPG, upon release it assumed the gaseous state again. Chemically, it is similar to coal gas.[3][4]

Blau gas is not blue, but has a rather water-like color. It was stored in steel cylinders for shipment and had the advantage that it possessed the highest specific energy of all artificially produced gases, but unlike coal gas, it was free from carbon monoxide.

Blau gas was burned for lighting and heating; a less-pure form known as Pintsch gas fueled railroad car lights and stoves in the late 19th and early 20th centuries. Blau gas was most famous, however, as the buoyancy compensating fuel for the LZ 127 Graf Zeppelin.[5] It had several advantages over liquid fuels such as gasoline. It was non-explosive[citation needed], and because it weighed approximately the same as air, burning it and replacing its volume with air did not lighten the airship, eliminating the need to adjust buoyancy or ballast in-flight.[6]