Bloomfield College is a four-year private liberal arts college located in Bloomfield, New Jersey. Bloomfield College is chartered by the State of New Jersey and accredited by the Middle States Association of Colleges and Schools. The college is related to the Presbyterian Church (U.S.A.) through the Synod of the Northeast and is a member of the Association of Presbyterian Colleges and Universities. It is a suburban residential community just 15 miles (24 km) from New York City, the College attracts a geographically diverse resident and commuter population. The 11-acre (45,000 m2) tree-lined campus is easily reached by train, bus, or by car. The mission of Bloomfield College is to attain academic, personal, and professional excellence in a multicultural and global society. 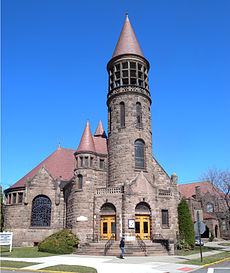 Bloomfield College was founded by the Presbyterian Church in 1868 as the German Theological Seminary of Newark, New Jersey. The roots of the College and its mission can be traced back to 1868. With the influx of nearly two million German immigrants following the European Revolution of 1848, it became necessary to establish a training school for German-speaking ministers.

Thus was born the German Theological Seminary of Newark, New Jersey. The institution's first four students met on September 16, 1869, in a room in the First German Presbyterian Church. Courses in theological instruction, Biblical history, pastoral work, natural philosophy, and United States history were taught in both English and German by the four full-time faculty. Classes were also conducted in Hebrew, Latin, and Greek.

In 1872, the school relocated to Bloomfield, occupying the home of the former Bloomfield Academy at Franklin and Liberty Streets. That structure stands today as Seibert Hall.

It has approximately 2,100 students and about 85% of the students are commuters. The college offers primarily undergraduate studies, but it has recently added an M.S. in Accounting. The college is regionally accredited by Middle States Association of Colleges and Schools. Bloomfield College has a student to faculty ratio of 16:1.

Bloomfield College accepts applications throughout the year on a rolling basis and Potential Students are notified within two weeks of the College's receipt of required materials. Applicants for admission to Bloomfield College are considered on the basis of their high school academic record, Scholastic Assessment Test (SAT-I) or American College Test (ACT) scores, recommendations, essay, extracurricular activities, and post secondary school transcripts where applicable.

The clubs and organizations offered to students focus on several different aspects of student life, including professional, ethnic, volunteer, academic, and artistic interests. Greek-letter organizations are also present. Students wishing to live on campus have a variety of options. First-year students traditionally live in one of two traditional dorms, Clee and Schweitzer Halls. Upperclassmen have several options for on-campus housing, including theme houses, suite-style living, and an off-campus residential facility in Newark, the University Center. The college's TRUE Program seeks to bring elements of the classroom into the residence halls; resident advisors design co-curricular programs in their halls in conjunction with the college's academic programming model.

Bloomfield College is also home to the Westminster Arts Center.[1] The center creates and presents diverse arts and cultural programs in collaboration with the College’s faculty, staff, students, community partners and professional arts groups such as 4th Wall Theatre, Inc. and Yates Musical Theatre; exposes students to diverse means of expressions and methods of thought; creates and presents thematic programming in response to curricular goals; raises and enhances the positive visibility of the College through public performances and exhibitions; supports the programs of the Creative Arts and Technology Division; encourages and promotes creativity throughout the College.