The Blue Brain Project is an attempt to create a synthetic brain by reverse-engineering mammalian brain circuitry. The aim of the project, founded in May 2005 by the Brain and Mind Institute of the École Polytechnique Fédérale de Lausanne (EPFL) in Switzerland, is to study the brain's architectural and functional principles.

The project is headed by the founding director Henry Markram and co-directed by Felix Schürmann and Sean Hill. Using a Blue Gene supercomputer running Michael Hines's NEURON software, the simulation does not consist simply of an artificial neural network, but involves a biologically realistic model of neurons.[1][2][3] It is hoped that it will eventually shed light on the nature of consciousness.[3]

There are a number of sub-projects, including the Cajal Blue Brain, coordinated by the Supercomputing and Visualization Center of Madrid (CeSViMa), and others run by universities and independent laboratories.

The initial goal of the project, completed in December 2006,[4] was the simulation of a rat neocortical column, which is considered by some researchers to be the smallest functional unit of the neocortex[5][6] (the part of the brain thought to be responsible for higher functions such as conscious thought). In humans, each column is about 2 mm in length, has a diameter of 0.5 mm and contains about 60,000[contradictory] neurons; rat neocortical columns are very similar in structure but contain only 10,000 neurons (and 108 synapses). Between 1995 and 2005, Markram mapped the types of neurons and their connections in such a column.

In November 2007,[7] the project reported the end of the first phase, delivering a data-driven process for creating, validating, and researching the neocortical column.

By 2005, the first single cellular model was completed. The first artificial cellular neocortical column of 10,000 cells was built by 2008. By July 2011, a cellular mesocircuit of 100 neocortical columns with a million cells in total was built. A cellular rat brain is planned[needs update] for 2014 with 100 mesocircuits totalling a hundred million cells. Finally a cellular human brain is predicted possible by 2023 equivalent to 1000 rat brains with a total of a hundred billion cells.[8][9]

Now that the column is finished, the project is currently busying itself with the publishing of initial results in scientific literature, and pursuing two separate goals:

In 2015, scientists at École Polytechnique Fédérale de Lausanne (EPFL) developed a quantitative model of the previously unknown relationship between the glial cell astrocytes and neurons. This model describes the energy management of the brain through the function of the neuro-glial vascular unit (NGV). The additional layer of neuron-glial cells is being added to Blue Brain Project models to improve functionality of the system. [10]

The project is funded primarily by the Swiss government and the Future and Emerging Technologies (FET) Flagship grant from the European Commission,[11] and secondarily by grants and some donations from private individuals. The EPFL bought the Blue Gene computer at a reduced cost because at that stage it was still a prototype and IBM was interested in exploring how different applications would perform on the machine. BBP was viewed a validation of the Blue Gene supercomputer concept.[12]

A 10 part documentary is being made by film director Noah Hutton, with each installment detailing the year-long workings of the project at the EPFL. Having started filming in 2009, the documentary is planned to be released in 2020, after the years of filming and editing have finished. Regular contributions from Henry Markram and the rest of the team provide an insight into the Blue Brain Project, while similar research tasks across the world are touched on.[13] 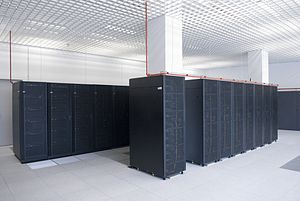 The Cajal Blue Brain[14] is coordinated by the Technical University of Madrid and uses the facilities of the Supercomputing and Visualization Center of Madrid and its supercomputer Magerit. The Cajal Institute also participates in this collaboration. The main lines of research currently being pursued at Cajal Blue Brain include neurological experimentation and computer simulations. Nanotechnology, in the form of a newly designed brain microscope, plays an important role in its research plans.[15]