Robert A. "Bob" Hoover (born January 24, 1922) is a former air show pilot and United States Air Force test pilot and fighter pilot. Known as the "pilot's pilot", Hoover revolutionized modern aerobatic flying and has been referred to by many aviation circles as one of the greatest pilots ever to have lived.[1][2][3] 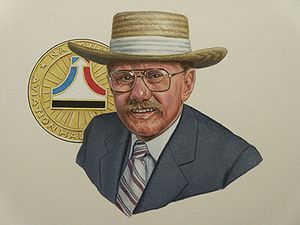 Hoover learned to fly at Nashville's Berry Field while working at a local grocery store to pay for the flight training.[4] He enlisted in the Tennessee National Guard and was sent for pilot training with the Army.[5]

During World War II, Hoover was sent to Casablanca where his first major assignment was test flying the assembled aircraft ready for service.[6] He was later assigned to the Spitfire-equipped 52d Fighter Group in Sicily.[7] In 1944, on his 59th mission, his malfunctioning Mark V Spitfire was shot down by a Focke-Wulf Fw 190 off the coast of Southern France and he was taken prisoner.[8] He spent 16 months at the German prison camp Stalag Luft 1 in Barth, Germany.[9]

Hoover managed to escape from the prison camp by stealing a Fw 190, and flew to safety in the Netherlands.[10] He was assigned to flight test duty at Wright Field after the war. There he impressed and befriended Chuck Yeager.[11] When Yeager was later asked who he wanted for flight crew for the supersonic Bell X-1 flight, he named Hoover. Hoover became Yeager's backup pilot in the Bell X-1 program and flew chase for Yeager in a Lockheed P-80 Shooting Star during the Mach 1 flight.[12] He also flew chase for the 50th anniversary of the Mach 1 flight in a General Dynamics F-16 Fighting Falcon.[13]

Hoover left the Air Force for civilian jobs in 1948.[14] This included a brief time with Allison Engine Company and finally test/demonstration pilot with North American Aviation where he went on to Korea teaching the pilots in Korean war how to dive-bomb with the F-86 Sabre. During his six weeks in Korea, Hoover flew many combat bombing missions over enemy territory, but was denied permission to engage in air-to-air combat flights.[15]

During the 1950s, Hoover visited many active-duty, reserve and air national guard units to demonstrate the plane's capabilities to their pilots. Hoover flew flight tests on the FJ-1 "Fury", F-86 "Sabre", and the F-100 "Super Sabre".

In the early 1960s, Hoover began flying the North American P-51 Mustang at airshows around the country. The Hoover Mustang (N2251D) was purchased by North American Aviation from Dave Lindsay's Cavalier Aircraft Corp. in 1962. A second Mustang (N51RH), later named "Ole Yeller," was purchased by North American Rockwell from Cavalier in 1971 to replace the earlier aircraft that was destroyed in a ground accident when an oxygen bottle exploded after being overfilled. Hoover demonstrated the Mustang and later the Aero Commander at hundreds of air shows until his retirement in the 1990s. In 1997, Hoover sold "Ole Yeller" to his good friend John Bagley of Rexburg, Idaho. "Ole Yeller" still flies frequently and is based at the Legacy Flight Museum [16] in Rexburg, Idaho.

Hoover is best known for his civil air show career, which started when he was hired to demonstrate the capabilities of Aero Commander's Shrike Commander, a twin piston-engined business aircraft that had developed a rather staid reputation due to its bulky shape. Hoover showed the strength of the plane as he put the aircraft through rolls, loops, and other maneuvers, which most people would not associate with executive aircraft. As a grand finale, he shut down both engines and executed a loop and an eight-point hesitation slow roll as he headed back to the runway. He touched down on one tire, then the other, before landing. After pulling off the runway, he would start engines to taxi back to the parking area. On airfields with large enough parking ramps (such as the Reno Stead Airport where the Reno Air Races take place), Hoover would sometimes land directly on the ramp and coast all the way back to his parking spot in front of the grandstand without restarting the engines. 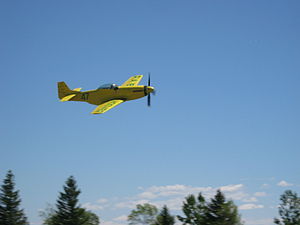 "Ole Yeller," flown by John Bagley at an air show in Rexburg, Idaho.

His air show aerobatics career ended over medical concerns, when Hoover's medical certificate was revoked by the Federal Aviation Administration (FAA) in the early 1990s.[19][20]

Shortly before his revocation, Hoover experienced serious engine problems in a North American T-28 Trojan off the coast of California. During his return to Torrance, he was able to keep the engine running intermittently by constantly manipulating the throttle, mixture and propeller lever. The engine seized at the moment of touchdown. Hoover believed his successful management of this difficult emergency should have convinced the FAA that he hadn't lost any ability.[21] Meanwhile, Hoover was granted a pilot's licence, and medical certificate, by Australia's aviation authorities.[22] Hoover's medical certificate was restored shortly afterward and he returned to the American airshow circuit for several years before retiring in 1999. The 77-year old Hoover still felt capable of performing and had recently passed a rigorous FAA physical, but he was unable to obtain insurance for air shows. Although he had had free insurance for several years as part of air show sponsorship deals, he was forced in 1999 to pay for it out of his own pocket and could not get coverage under $2 million. His final show was Sun'N'Fun 2000 in Lakeland, Florida where he did not perform any acrobatics.[20] 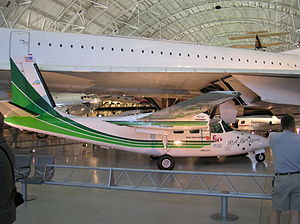 Following Hoover's retirement, his Shrike Commander was placed on display at the National Air and Space Museum, Udvar-Hazy Center, in Dulles, Virginia.[23]

Hoover is considered one of the founding fathers of modern aerobatics, and was described by Jimmy Doolittle as, "... the greatest stick-and-rudder man who ever lived."[24] In the Centennial of Flight edition of the Air & Space Smithsonian, he was named the third greatest aviator in history.

During his illustrious career, Hoover was awarded the following military medals: Distinguished Flying Cross, Soldier's Medal for Valor, Air Medal with Clusters, Purple Heart and the French Croix de Guerre.[25] He was also made an honorary member of the Blue Angels, Thunderbirds, RCAF Snowbirds, American Fighter Aces Association, original Eagle Squadron and received an Award of Merit from the American Fighter Pilots Association.[25] In 1988, he was inducted into the National Aviation Hall of Fame, and in 1992, the Aerospace Walk of Honor.[26]

On May 18, 2010, Hoover delivered the 2010 Charles A. Lindbergh Memorial Lecture at the Smithsonian Institution's National Air and Space Museum in Washington, D.C. The U.S. Air Force Test Pilot School conferred an honorary doctorate on Hoover at the school's December 2010 graduation ceremony.[28] Flying magazine placed Hoover number 10 on its list of "The 51 Heroes of Aviation" in 2013.[1]

Hoover's decades of fantastic flying form the framework for the 2014 documentary film, Flying The Feathered Edge: The Bob Hoover Project, in which Hoover's likeable personality is the star. Hoover received a standing ovation from the crowd of about 100 at the invitation-only preview during EAA AirVenture Oshkosh, July 2014.[29]

Flying the Feathered Edge is a highly researched three-year project.[32] The film tells Hoover's story from his first flying lessons before World War II to his combat and postwar careers as a test pilot and air show legend.[31] Aviation Week reporter Fred George's review stated, "After 90 minutes there were few dry eyes in the house as the credits rolled at the end of the documentary ... in 'Aviation Week''s opinion, a film well worth our reader's viewing time when it appears in nearby theaters."[33]

This system was given this name following an accident in which Hoover was seriously injured, when both engines on his Shrike Commander failed during takeoff. Investigators found that the plane had just been fueled by line personnel who mistook the piston-engine Shrike for a similar turboprop model, filling the tanks with jet fuel instead of avgas (aviation gasoline).[35] There was enough avgas in the fuel system to taxi to the runway and take off, but then the jet fuel was drawn into the engines, causing them to stop.

Once Hoover recovered, he widely promoted[36] the use of the new type of nozzle with the support and funding of the National Air Transportation Association, General Aviation Manufacturers Association and various other aviation groups (the nozzle is now required by Federal regulation on jet fuel pumps).[37][38]