From Infogalactic: the planetary knowledge core
(Redirected from Bobruisk)
Jump to: navigation, search

Babruysk, Bobruysk, or Bobruisk (Belarusian: Бабру́йск, Łacinka: Babrujsk, Russian: Бобру́йск, Polish: Bobrujsk, Yiddish: באברויסק‎) is a city in the Mogilev Region of eastern Belarus on the Berezina river. It is a large city in Belarus. As of 2009[update], its population was 215,092.[1] The name Babruysk (as well as that of the Babruyka River) probably originates from the Belarusian word babyor (бобёр) (beaver), many of which used to inhabit the Berezina. However, beavers in the area have been almost eliminated by the end of the 19th century due to hunting and pollution.

Babruysk occupies an area of 66 square kilometres (25 sq mi), and comprises over 450 streets whose combined length stretches for over 430 km (267 mi).

Babruysk is located at the intersection of railroads to Asipovichy, Zhlobin, Kastrychnitski and roads to Minsk, Gomel, Mogilev, Kalinkavichy, Slutsk, and Rahachow. It has the biggest timber mill in Belarus, and is also known for its chemical, machine building and metal-working industries.

In 2003, there were 34 public schools in Babruysk, with over 34,000 students. There are also three schools specializing in music, dance and visual arts. Additionally, there is a medical school and numerous professional technical schools.

Babruysk is one of the oldest cities in Belarus. It was first mentioned in writing in the middle of the 14th century. Investigations by archaeologists revealed that in the 5th and 6th centuries there existed Slavic settlements up the river Biarezina from where Babruysk is currently located; findings of stone tools and weapons suggest that people have lived in the area since the stone age.

During the reign of Vladimir I, Prince of Kiev, in place of modern-day Babruysk there was a village whose inhabitants were occupied with fishing and beaver trapping. This is where the name Babruysk originated. For many centuries Babruysk was part of the Polish-Lithuanian Commonwealth and was an important militarily fortified border post. In the 14th century a castle was built on one of the hills near the Berezina River.

Babruysk was not only a major military base, but also a prominent trade center. There is evidence of a market containing nearly one hundred stalls, which implies significant financial activity. In the first half of the 17th century Babruysk became a big trade outpost thanks to its strategic position at the intersection of major trade routes and the Berezina river. There was a flowering of skilled tradesmen, including carpenters, blacksmiths, goldsmiths, and bakers. The population in the first half of the 17th century was between 2,000 and 5,000 people.

The town was surrounded by fortifications made from wood and earth, whose length stretched for over 3 km (2 mi). These included a protective earth barrier, wooden walls, and almost a dozen two-story watchtowers. In the walls there were openings designed for the placement of firearms. After the Second Partition of Poland in 1793 it came into the hands of Imperial Russia. In 1810, the construction of a fortress began to mark the border between Russia and Austria and Prussia; in 1812 it was almost completed and was successful in repelling Napoleon's attack for four months. After the war the building was renewed on a large scale, and it was completed in 1820. That was one of the western Russian fortresses. The Babruysk fortress has served its purpose for many decades and today it is a major tourist attraction.

The 1861 census showed a population of 15,766. The ethnic groups living in Babruysk included Belarusians, Ukrainians, Poles, and Jews. As in other cities of Belarus, most of the buildings were constructed from wood. In 1866 there were 1498 houses, only 29 of which were made from brick.

There was a steady increase in the Jewish population of Babruysk following the Napoleonic wars. By 1897, in the population of 34,336 citizens, 60%, or 20,760 were Jews.[2] Most of them were employed in crafts, industry and trade.

During the 1890s, the citizens of Babruysk witnessed pogroms after the assassination of the Russian emperor Alexander II. Many of the attacks were repelled by armed Jewish self-defense.[citation needed]

In 1902, the Great Fire of Babruysk left 2,500 families homeless and destroyed over 250 business, 15 schools and the market. There were more than 7 million rubles in property damage, however the city was quickly rebuilt, this time with brick and stone.

Between February 2 and March 11, 1918 was a Battle of Bobrujsk, bettwen units of the Polish I Corps in Russia, commanded by General Jozef Dowbor-Musnicki, fought with the Red Army over the control of the city and region of Babruysk. In 1918—1920, town was captured by Polish liberation forces. 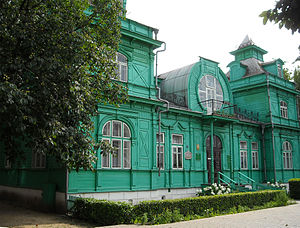 The old library building of Babruysk. 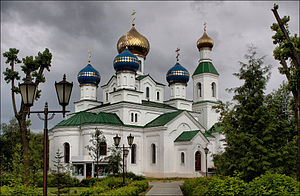 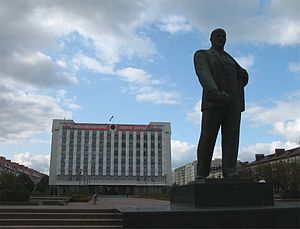 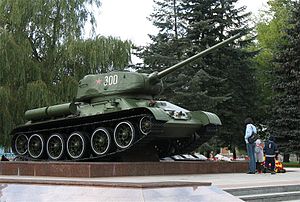 Old T-34 tank lifted on a podium in Babruysk downtown. 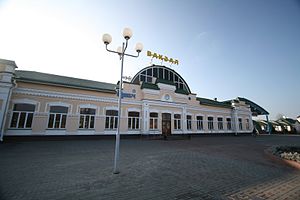 In 1941, Hitler's forces invaded Babruysk. Believing that German troops would not target civilians, many Jews stayed behind. Consequently, 20,000 Babruysk Jews were shot and buried in mass graves. Ghetto and labor camps were established in the southwest part of town. The conditions inside the camps were horrible and involved lack of food, lack of sanitation and perpetual abuse by the Nazi guards. Soon the Nazis began executing the Jews in the ghetto in groups of about 30. By 1943 all labor camps have been liquidated and the remaining Jews killed. The few Jews who escaped joined partisan forces in the surrounding forest and went about attacking enemy railroad lines. There is a small memorial dedicated to the memory of Babruysk Jews killed in the Holocaust, located in the Nahalat Yitzhak cemetery, Giv'atayim, Israel, as part of the Babi Yar memorial.[3]

On June 29, 1944, the Red Army liberated Babruysk. The city lay in ruins; while the population had been 84,107 in 1939, it was down to 28,352 following the war. The difficult process of rebuilding was conducted by thousands of workers and war prisoners who labored to clear factories and streets of rubble and filled in craters made by the bombardment. The machine building plant had been almost completely destroyed, but was restored to working order by the end of 1944. Many other factories and facilities were also rebuilt.

Between 1944 and 1954, Babruysk served as an administrative center of Babruysk Voblast.

Babruysk is twinned with:

This climatic region is typified by large seasonal temperature differences, with warm to hot (and often humid) summers and cold (sometimes severely cold) winters. According to the Köppen Climate Classification system, Babruysk has a humid continental climate, abbreviated "Dfb" on climate maps.[4]