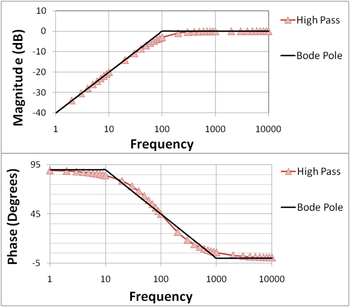 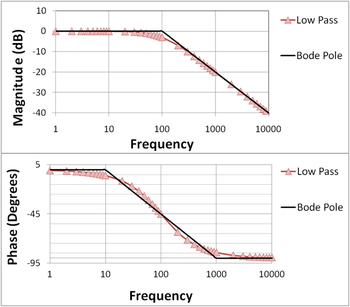 Figure 1(b): The Bode plot for a first-order (one-pole) lowpass filter; the straight-line approximations are labeled "Bode pole"; phase is 90° lower than for Figure 1(a) because the phase contribution of the numerator is 0° at all frequencies.

In electrical engineering and control theory, a Bode plot /ˈboʊdi/ is a graph of the frequency response of a system. It is usually a combination of a Bode magnitude plot, expressing the magnitude (usually in decibels) of the frequency response, and a Bode phase plot, expressing the phase shift. Both quantities are plotted against a horizontal axis proportional to the logarithm of frequency. Given that the decibel is itself a logarithmic scale, the Bode amplitude plot is log–log plot, whereas the Bode phase plot is a lin-log plot.[1]

As originally conceived by Bode in the 1930s, the plot is only an asymptotic approximation of the frequency response, using straight line segments.[2] However, with the advent of low cost computing, it is often taken nowadays to mean the precise plot of the actual frequency response.

Among his several important contributions to circuit theory and control theory, engineer Hendrik Wade Bode, while working at Bell Labs in the United States in the 1930s, devised a simple but accurate method for graphing gain and phase-shift plots. These bear his name, Bode gain plot and Bode phase plot. "Bode" is pronounced /ˈboʊdi/ BOH-dee (Dutch: [ˈboːdə]).[3][4]

Bode was faced with the problem of designing stable amplifiers with feedback for use in telephone networks. He developed the graphical design technique of the Bode plots to show the gain margin and phase margin required to maintain stability under variations in circuit characteristics caused during manufacture or during operation.[5] The principles developed were applied to design problems of servomechanisms and other feedback control systems. The Bode plot is an example of analysis in the frequency domain.

The Bode plot for a linear, time-invariant system with transfer function

being the complex frequency in the Laplace domain) consists of a magnitude plot and a phase plot.

The Bode magnitude plot is the graph of the function

being the imaginary unit). The

is plotted on the axis at

in degrees plotted logarithmically as a function of

The one-pole highpass RC-filter has the transfer function

is the inverse of the cut-off frequency

The last equality is obtained using the rules for complex numbers. On the Bode magnitude plot, decibels are used, and the plotted magnitude is:

To obtain the Bode phase plot one calculates:

Care must be taken that the inverse tangent is set up to return degrees, not radians. The resulting Bode plot is shown in Figure 1(a) for

is the inverse of the cut-off frequency. The corresponding Bode Plot is shown in Figure 1(b).

If the transfer function is a rational function with real poles and zeros, then the Bode plot can be approximated with straight lines. These asymptotic approximations are called straight line Bode plots or uncorrected Bode plots and are useful because they can be drawn by hand following a few simple rules. Simple plots can even be predicted without drawing them.

The approximation can be taken further by correcting the value at each cutoff frequency. The plot is then called a corrected Bode plot.

This section illustrates that a Bode Plot is a visualization of the frequency response of a system.

. Assume that the system is subject to a sinusoidal input with frequency

that is applied persistently, i.e. from a time

. The response will be of the form

shifted in phase with respect to the input by a phase

and that the phase shift is

A sketch for the proof of these equations is given in the appendix.

In summary, subjected to an input with frequency

. These quantities, thus, characterize the frequency response and are shown in the Bode plot.

For many practical problems, the detailed Bode plots can be approximated with straight-line segments that are asymptotes of the precise response. The effect of each of the terms of a multiple element transfer function can be approximated by a set of straight lines on a Bode plot. This allows a graphical solution of the overall frequency response function. Before widespread availability of digital computers, graphical methods were extensively used to reduce the need for tedious calculation; a graphical solution could be used to identify feasible ranges of parameters for a new design.

The premise of a Bode plot is that one can consider the log of a function in the form:

as a sum of the logs of its poles and zeros:

to define decibels. Given a transfer function in the form

is the transfer function:

can, in many cases, be approximated as

Note that zeros and poles happen when

is equal to a certain

. This is because the function in question is the magnitude of

, and since it is a complex function,

. Thus at any place where there is a zero or pole involving the term

, the magnitude of that term is

To correct a straight-line amplitude plot:

Given a transfer function in the same form as above:

the idea is to draw separate plots for each pole and zero, then add them up. The actual phase curve is given by

To draw the phase plot, for each pole and zero:

To create a straight-line plot for the lowpass filter, introduced above, one considers the transfer function in terms of the angular frequency:

The above equation is the normalized form of the transfer function. The Bode plot is shown in Figure 1(b) above, and construction of the straight-line approximation is discussed next.

The magnitude (in decibels) of the transfer function above, (normalized and converted to angular frequency form), given by the decibel gain expression 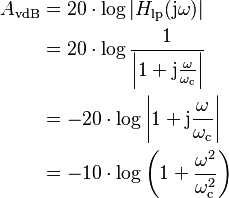 then plotted versus input frequency

on a logarithmic scale, can be approximated by two lines and it forms the asymptotic (approximate) magnitude Bode plot of the transfer function:

are the input and cutoff angular frequencies respectively. For input frequencies much lower than corner, the ratio

is small and therefore the phase angle is close to zero. As the ratio increases the absolute value of the phase increases and becomes –45 degrees when

. As the ratio increases for input frequencies much greater than the corner frequency, the phase angle asymptotically approaches −90 degrees. The frequency scale for the phase plot is logarithmic.

The horizontal frequency axis, in both the magnitude and phase plots, can be replaced by the normalized (nondimensional) frequency ratio

An example with pole and zero

Figures 2-5 further illustrate construction of Bode plots. This example with both a pole and a zero shows how to use superposition. To begin, the components are presented separately.

Figure 4 and Figure 5 show how superposition (simple addition) of a pole and zero plot is done. The Bode straight line plots again are compared with the exact plots. The zero has been moved to higher frequency than the pole to make a more interesting example. Notice in Figure 4 that the 20 dB/decade drop of the pole is arrested by the 20 dB/decade rise of the zero resulting in a horizontal magnitude plot for frequencies above the zero location. Notice in Figure 5 in the phase plot that the straight-line approximation is pretty approximate in the region where both pole and zero affect the phase. Notice also in Figure 5 that the range of frequencies where the phase changes in the straight line plot is limited to frequencies a factor of ten above and below the pole (zero) location. Where the phase of the pole and the zero both are present, the straight-line phase plot is horizontal because the 45°/decade drop of the pole is arrested by the overlapping 45°/decade rise of the zero in the limited range of frequencies where both are active contributors to the phase.

where AFB is the gain of the amplifier with feedback (the closed-loop gain), β is the feedback factor and AOL is the gain without feedback (the open-loop gain). The gain AOL is a complex function of frequency, with both magnitude and phase.[note 1] Examination of this relation shows the possibility of infinite gain (interpreted as instability) if the product βAOL = −1. (That is, the magnitude of βAOL is unity and its phase is −180°, the so-called Barkhausen stability criterion). Bode plots are used to determine just how close an amplifier comes to satisfying this condition.

where vertical bars denote the magnitude of a complex number (for example,

), and frequency f0 dB is determined by the condition:

If a simple yes or no on the stability issue is all that is needed, the amplifier is stable if f0 dB < f180. This criterion is sufficient to predict stability only for amplifiers satisfying some restrictions on their pole and zero positions (minimum phase systems). Although these restrictions usually are met, if they are not another method must be used, such as the Nyquist plot.[7][8] Optimal gain and phase margins may be computed using Nevanlinna–Pick interpolation theory.[9]

Figures 6 and 7 illustrate the gain behavior and terminology. For a three-pole amplifier, Figure 6 compares the Bode plot for the gain without feedback (the open-loop gain) AOL with the gain with feedback AFB (the closed-loop gain). See negative feedback amplifier for more detail.

Near this crossover of the two gains at f0 dB, the Barkhausen criteria are almost satisfied in this example, and the feedback amplifier exhibits a massive peak in gain (it would be infinity if β AOL = −1). Beyond the unity gain frequency f0 dB, the open-loop gain is sufficiently small that AFB ≈ AOL (examine the formula at the beginning of this section for the case of small AOL).

Comparing the labeled points in Figure 6 and Figure 7, it is seen that the unity gain frequency f0 dB and the phase-flip frequency f180 are very nearly equal in this amplifier, f180 ≈ f0 dB ≈ 3.332 kHz, which means the gain margin and phase margin are nearly zero. The amplifier is borderline stable.

Figures 8 and 9 illustrate the gain margin and phase margin for a different amount of feedback β. The feedback factor is chosen smaller than in Figure 6 or 7, moving the condition | β AOL | = 1 to lower frequency. In this example, 1 / β = 77 dB, and at low frequencies AFB ≈ 77 dB as well. 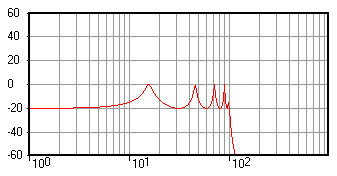 Figure 10: Amplitude diagram of a 10th order Chebyshev filter plotted using a Bode Plotter application. The chebyshev transfer function is defined by poles and zeros which are added by clicking on a graphical complex diagram.

The Bode plotter is an electronic instrument resembling an oscilloscope, which produces a Bode diagram, or a graph, of a circuit's voltage gain or phase shift plotted against frequency in a feedback control system or a filter. An example of this is shown in Figure 10. It is extremely useful for analyzing and testing filters and the stability of feedback control systems, through the measurement of corner (cutoff) frequencies and gain and phase margins.

Two related plots that display the same data in different coordinate systems are the Nyquist plot and the Nichols plot. These are parametric plots, with frequency as the input and magnitude and phase of the frequency response as the output. The Nyquist plot displays these in polar coordinates, with magnitude mapping to radius and phase to argument (angle). The Nichols plot displays these in rectangular coordinates, on the log scale.

Proof Sketch for the Relation to Frequency Response

This section sketches a proof for the relation between frequency response and the magnitude and phase of the transfer function in Eqs.(1)-(2).

Slightly changing the requirements for Eqs.(1)-(2) one assumes that the input has been applied starting at time

and one calculates the output in the limit

. In this case, the output is given by the convolution

. The integral can be split in the following way

where the second term vanishes in the limit

is a real function this can be written as

. Inserting the definition in the form

one obtains the output signal