Bodh Gaya is a religious site and place of pilgrimage associated with the Mahabodhi Temple Complex in Gaya district in the Indian state of Bihar. It is famous as it is the place where Gautama Buddha is said to have obtained Enlightenment (Bodhimandala) under what became known as the Bodhi Tree.[2]

For Buddhists, Bodh Gaya is the most important of the main four pilgrimage sites related to the life of Gautama Buddha, the other three being Kushinagar, Lumbini, and Sarnath. In 2002, Mahabodhi Temple, located in Bodh Gaya, became a UNESCO World Heritage Site.[3]

Bodh Gaya is the most holy place for the followers of the Buddhist faith all over the world. Situated by the bank of river Neranjana the place was then known as Uruwela. King Ashoka was the first to build a temple here.[4]

Traditionally, Buddha was born in 563 BC in what is now Nepal [5][6] on the following auspicious Baisakhi purnima. As Siddhartha, he renounced his family at the age of 29 in 534 BC [7][8] and travelled and meditated in search of truth. After practicing self-mortification for six years at Urubela (Buddhagaya) in Gaya, he gave up that practice because it did not give him Vimukthi. Then he discovered Noble Eight-fold path without help from anyone and practiced it, then he attained Buddhatva or enlightenment. Enlightenment is a state of being completely free from lust (raga), hatred (dosa) and delusion (moha). By gaining enlightenment, you enter Nibbana, in which the final stage is Parinibbana.

At this place, the Buddha was abandoned by the five men who had been his companions of earlier austerities. All they saw was an ordinary man; they mocked his well-nourished appearance. "Here comes the mendicant Gautama," they said, "who has turned away from asceticism. He is certainly not worth our respect." When they reminded him of his former vows, the Buddha replied, "Austerities only confuse the mind. In the exhaustion and mental stupor to which they lead, one can no longer understand the ordinary things of life, still less the truth that lies beyond the senses. I have given up extremes of either luxury or asceticism. I have discovered the Middle Way". This is the path which is neither easy (a rich prince) nor hard (living in austere conditions practicing self-denial). Hearing this, the five ascetics became the Buddha's first disciples in Deer Park, Sarnath, 13 km n.e. of Benares.

The disciples of Gautama Siddhartha began to visit the place during the full moon in the month of Vaisakh (April–May), as per the Hindu calendar. Over time, the place became known as Bodh Gaya, the day of enlightenment as Buddha Purnima, and the tree as the Bodhi Tree.

The history of Bodh Gaya is documented by many inscriptions and pilgrimage accounts. Foremost among these are the accounts of the Chinese pilgrims Faxian in the 5th century and Xuanzang in the 7th century. The area was at the heart of a Buddhist civilization for centuries, until it was conquered by Turkic armies in the 13th century. The place-name, Bodh Gaya, did not come into use until the 18th century CE. Historically, it was known as Uruvela, Sambodhi, Vajrasana or Mahabodhi.[9] The main monastery of Bodh Gaya used to be called the Bodhimanda-vihāra (Pali). Now it is called the Mahabodhi Temple. 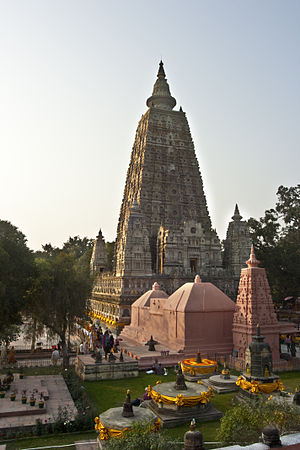 The complex, located about 110 kilometres from Patna, at Lua error in Module:Coordinates at line 668: callParserFunction: function "#coordinates" was not found.,[10] contains the Mahabodhi Temple with the diamond throne (called the Vajrasana) and the holy Bodhi tree. This tree was originally a sapling of the Sri Maha Bodhi tree in Sri Lanka, itself grown from a sapling of the original Bodhi tree.

It is believed that about 280 years after the Enlightenment of the Buddha, Emperor Ashoka visited Bodh Gaya. He is considered to be the founder of the original Mahabodhi temple. It consisted of an elongated spire crowned by a miniature stupa and a chhatravali on a platform. A double flight of steps led up to the platform and the upper sanctum. The mouldings on the spire contained Buddha images in niches. Some historians believe that the temple was constructed or renovated in the 1st century during the Kushan period. With the decline of Buddhism in India, the temple was abandoned and forgotten, buried under layers of soil and sand.

The temple was later restored by Sir Alexander Cunningham in the late 19th century.[citation needed] In 1883, Cunningham along with J. D. Beglar and Dr Rajendralal Miitra painstakingly excavated the site. Extensive renovation work was carried out to restore Bodh Gaya to its former glory. It has a height of 55 metres which can be viewed from a distance of 11 km. 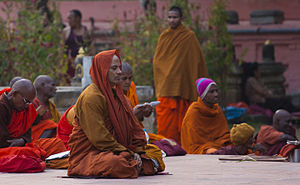 Kittisirimegha of Sri Lanka, a contemporary of Samudragupta, erected with the permission of Samudragupta, a Sanghārāma near the Mahābodhi-vihāra, chiefly for the use of the Singhalese monks who went to worship the Bodhi tree. The circumstances in connection with the Sanghārāma are given by Xuanzang (Beal, op. cit., 133ff) who gives a description of it as seen by himself. It was probably here that Buddhaghosa met the Elder Revata who persuaded him to come to Ceylon.

Several Buddhist temples and monasteries have been built by the people of Bhutan, China, Japan, Myanmar, Nepal, Sikkim, Sri Lanka, Taiwan, Thailand, Tibet and Vietnam in a wide area around the Mahabodhi Temple. These buildings reflect the architectural style, exterior and interior decoration of their respective countries. The statue of Buddha in the Chinese temple is 200 years old and was brought from China. Japan's Nippon temple is shaped like a pagoda. The Myanmar (Burmese) temple is also pagoda shaped and is reminiscent of Bagan. The Thai temple has a typical sloping, curved roof covered with golden tiles. Inside, the temple holds a massive bronze statue of Buddha. Next to the Thai temple is 25-metre statue of Buddha [11] located within a garden which has existed there for over 100 years.

On 7 July 2013 at around 5.15 a.m. a low intensity bomb blast took place in the 1500-year-old Mahabodhi Temple complex. This was followed by a series of nine low intensity blasts and two monks were injured, one Tibetan and the other a Burmese. These blasts were carried out by an Islamic terrorist organisation, to seek revenge for the killings of Muslims in Burma. The serial blasts did not cause any damage to the temple or the tree under which Buddha attained enlightenment. Two other bombs, one under the 80-foot statue of the Buddha and the other near Karmapa Temple were defused by the police. The statue of the Buddha is now a symbol of the holy place Bodh Gaya, next to the Mahabodhi Temple, a World Heritage site.[12][13] Investigation of the blast was given to NIA (National Investigating Agency). Three unexploded bombs were also found in the Temple complex.