Body art is art made on, with, or consisting of, the human body. The most common forms of body art are tattoos and body piercings. Other types include scarification, branding, subdermal implants, scalpelling, shaping (for example tight-lacing of corsets), full body tattoo and body painting.

Body art is also a sub-category of performance art, in which artists use or abuse their own body to make their particular statements. More extreme body art can involve mutilation or pushing the body to its physical limits.

In more recent times, the body has become a subject of much broader discussion and treatment than can be reduced to body art in its common understanding. Important strategies that question the human body are: implants, body in symbiosis with the new technologies, virtual bodies, among others.

The Vienna Action Group was formed in 1965 by Herman Nitsch, Otto Muhl, Gunter Brus, and Rudolf Schwartzkogler. They performed several body art actions, usually involving social taboos (such as genital mutilation)..[citation needed] Vito Acconci once documented, through photos and text, his daily exercise routine of stepping on and off a chair for as long as possible over several months. Acconci also performed Following Piece, in which he followed randomly chosen New Yorkers.[citation needed]

In France, body art was termed art corporel and practised by such artists as Michel Journiac and Gina Pane.[citation needed] In Italy in the 1980s, one of the famous artists in the movement was Ketty La Rocca.[1]

Marina Abramović performed Rhythm 0 in 1974. In the piece, the audience was given instructions to use on Abramović's body an array of 72 provided instruments of pain and pleasure, including knives, feathers, and a loaded pistol. Audience members cut her, pressed thorns into her belly, applied lipstick to her, and removed her clothes. The performance ended after six hours, when someone held the loaded pistol up to Abramović's head and a scuffle broke out.[citation needed] Photographer Spencer Tunick is well known for conducting photo shoots which gather large numbers of people at unlikely public locations, whereby everyone is positioned nude, forming surrealistic nude-scapes.[citation needed]

Artists whose works have evolved with more directed personal mythologies include Rebecca Horn, Youri Messen-Jaschin, Javier Perez, and Jana Sterbak.[2] Body art can also be expressed via writing rather than painting. 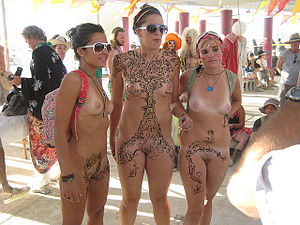 For example, one of Marina Abramović's works involved dancing until she collapsed from exhaustion, while one of Dennis Oppenheim's better-known works saw him lying in the sunlight with a book on his chest, until his skin, excluding that covered by the book, was badly sunburned. It can even consist of the arrangement and dissection of preserved bodies in an artistic fashion, as in the case of the plastinated bodies used in the travelling Body Worlds exhibition.

Scientific research in this area, for example that by Kevin Warwick, can be considered in this artistic vein.[3] A special case of the body art strategies is the absence of body. Some artists who performed the "absence" of body through their artworks were:, Davor Džalto, Anthony Gormley, and Andy Warhol.

Burning Man festival is held annually in the Black Rock Desert of northwest Nevada (USA), September. Jake Lloyd Jones, a Sydney based artist, conceived the Sydney Body Art Ride, which has become an annual event. Participants are painted to form a living rainbow that rides to the Pacific Ocean and immerses itself in the waves.[4]