From Infogalactic: the planetary knowledge core
(Redirected from Bogdan (bus))
Jump to: navigation, search
This article is about the model of Ukrainian bus manufacturer. For other meanings, see Bogdan (disambiguation). 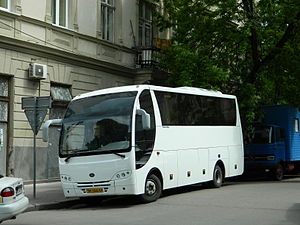 Bogdan (Ukrainian: Богдан) is the brand of the Ukrainian buses and trolleybuses made by Bogdan Corporation. The original two front-engine/rear-wheel drive models (Bohdan A091 and Bohdan A092) are powered by Isuzu and marketed outside Ukraine under Isuzu brand. Large city buses, such as the rear-engined Bogdan A145 and Bohdan A1445, are also produced. The production is situated in the city of Cherkasy, although there are plans of moving it to the LuAZ plant in the city of Lutsk. These vehicles are generally serving as marshrutka (routed taxicab / minibus) in former Soviet regions. The plant was originally the Cherkasy Autorepair Plant, which was founded in 1964.[1]