From Infogalactic: the planetary knowledge core
Jump to: navigation, search
For other uses, see Bogdanovka (disambiguation). 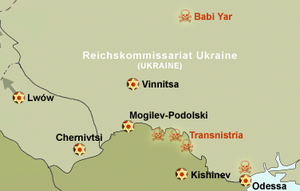 Bogdanovka was a concentration camp for Jews that was established by the Romanian authorities during World War II as part of the Holocaust, during the 1941 Odessa massacre which saw the extermination of Jews in Odessa and surrounding towns in Transnistria during the autumn of 1941 and the winter of 1942 in a series of massacres and killings by Romanian forces, under German control, encouragement and instruction.

Three concentration camps were situated near the villages of Bogdanovka, Domanovka and Acmecetca on the Southern Bug river, in Golta district, Transnistria with Bogdanovka holding 54,000 people by the end of 1941.

In December 1941, a few cases of typhus, which is a disease spread by lice and fleas, broke out in the camp.[1] A decision was made by the German adviser to the Romanian administration of the district, and the Romanian District Commissioner to murder all the inmates. The Aktion began on December 21, and was carried out by Romanian soldiers, gendarmes, Ukrainian police, civilians from Golta,[2] and local ethnic Germans under the commander of the Ukrainian regular police, Kazachievici. Thousands of disabled and ill inmates were forced into two locked stables, which were doused with kerosene and set ablaze, burning alive all those inside. Other inmates were led in groups to a ravine in a nearby forest and shot in their necks. The remaining Jews dug pits with their bare hands in the bitter cold, and packed them with frozen corpses. Thousands of Jews froze to death. A break was made for Christmas, but the killing resumed on December 28. By December 31, over 40,000 Jews had been killed.[3]