The Bohemian Club is a private club in two locations: a city clubhouse in the Union Square district of San Francisco, California, and the Bohemian Grove, a retreat north of the city in Sonoma County.[3] Founded in 1872 from a regular meeting of journalists, artists and musicians, it soon began to accept businessmen and entrepreneurs as permanent members, as well as offering temporary membership to university presidents and military commanders who were serving in the San Francisco Bay Area. Today, the club has a diverse membership of many local and global leaders, ranging from artists and musicians to businessmen. 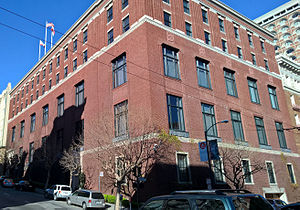 The Bohemian Club's City Clubhouse, viewed from the corner of Taylor Street and Post Street.

The Bohemian Club has two locations: the City Club and the Bohemian Grove (see below). The City Club is located in a six-story masonry building at the corner of Post Street and Taylor Street, two blocks west of Union Square, and on the same block as both the Olympic Club and the Marines Memorial Club. The clubhouse contains dining rooms, meeting rooms, a bar, a library, an art gallery, a theater, and guestrooms.

In New York City and other American metropolises in the late 1850s, groups of young, cultured journalists flourished as self-described "bohemians" until the American Civil War broke them up and sent them out as war correspondents.[4] During the war, reporters began to assume the title "bohemian," and newspapermen in general took up the moniker. "Bohemian" became synonymous with "newspaper writer".[4] California journalist Bret Harte first wrote as "The Bohemian" in The Golden Era in 1861, with this persona taking part in many satirical doings. Harte described San Francisco as a sort of Bohemia of the West.[5] Mark Twain called himself and poet Charles Warren Stoddard bohemians in 1867.[4]

The Bohemian Club was originally formed in April 1872 by and for journalists who wished to promote a fraternal connection among men who enjoyed the arts. Michael Henry de Young, proprietor of the San Francisco Chronicle, provided this description of its formation in a 1915 interview:

The Bohemian Club was organized in the Chronicle office by Tommy Newcombe, Sutherland, Dan O'Connell, Harry Dam and others who were members of the staff. The boys wanted a place where they could get together after work, and they took a room on Sacramento street below Kearny. That was the start of the Bohemian Club, and it was not an unmixed blessing for the Chronicle because the boys would go there sometimes when they should have reported at the office. Very often when Dan O'Connell sat down to a good dinner there he would forget that he had a pocketful of notes for an important story.[6]

Journalists were to be regular members; artists and musicians were to be honorary members.[7] The group quickly relaxed its rules for membership to permit some people to join who had little artistic talent, but enjoyed the arts and had greater financial resources. Eventually, the original "bohemian" members were in the minority and the wealthy and powerful controlled the club.[8][9] Club members who were established and successful, respectable family men, defined for themselves their own form of bohemianism which included men who were bons vivants, sometime outdoorsmen, and appreciators of the arts.[5] Club member and poet George Sterling responded to this redefinition:

Any good mixer of convivial habits considers he has a right to be called a Bohemian. But that is not a valid claim. There are two elements, at least, that are essential to Bohemianism. The first is devotion or addiction to one or more of the Seven Arts; the other is poverty. Other factors suggest themselves: for instance, I like to think of my Bohemians as young, as radical in their outlook on art and life; as unconventional, and, though this is debatable, as dwellers in a city large enough to have the somewhat cruel atmosphere of all great cities.[10]

Despite his purist views, Sterling associated very closely with the Bohemian Club, and caroused with artist and industrialist alike at the Bohemian Grove.[10]

Oscar Wilde, upon visiting the club in 1882, is reported to have said "I never saw so many well-dressed, well-fed, business-looking Bohemians in my life."[11]

A number of past membership lists are in public domain,[7] but modern club membership lists are private. Some prominent figures have been given honorary membership, such as Richard Nixon and William Randolph Hearst. Members have included some U.S. presidents (usually before they are elected to office), many cabinet officials, and CEOs of large corporations, including major financial institutions. Major military contractors, oil companies, banks (including the Federal Reserve), utilities, and national media have high-ranking officials as club members or guests. Many members are, or have been, on the board of directors of several of these corporations; however, artists and lovers of art are among the most active members. The club's bylaws require ten percent of the membership be accomplished artists of all types (composers, musicians, singers, actors, lighting artists, painters, authors, etc.)

The club motto is "Weaving Spiders Come Not Here", a line taken from Act 2, Scene 2, of Shakespeare's A Midsummer Night's Dream. The club motto implies that outside concerns and business deals are to be left outside. When gathered in groups, Bohemians usually adhere to the injunction, though discussion of business often occurs between pairs of members.[12] 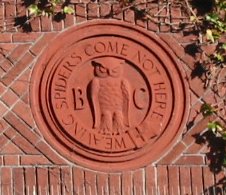 The club's mascot owl cast in masonry perched over the main entrance at 624 Taylor. The owl is flanked by the letters B and C and surrounded by words of the club's motto

Every year the club hosts a two-week-long (three weekends) camp at Bohemian Grove, which is notable for its illustrious guest list and its eclectic Cremation of Care ceremony which mockingly burns "Care" (the normal woes of life) with grand pageantry, pyrotechnics and brilliant costumes, all done at the edge of a lake and at the base of a forty-foot 'stone' owl statue. In addition to that ceremony, there are also two outdoor performances (dramatic and comedic plays), often with elaborate set design and orchestral accompaniment. The more elaborate of the two is the Grove Play, or High Jinks, the more ribald is called Low Jinks.[13] More often than not, the productions are original creations of the Associate members but active participation of hundreds of members of all backgrounds is traditional.[14] 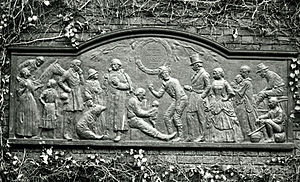 followed by the founder's mark for L. De Rome. When the original building was torn down, the relief was removed. In 1934, it was reinstalled on the building that stands today.[15]