The earliest origins of the Bolshoi Ballet, can be found in the creation of a dance school for a Moscow orphanage in 1773.[1] In 1776, dancers from the school were employed by Prince Pyotr Urusov and the English theatrical entrepreneur Michael Maddox, to form part of their new theatre company.[2] Originally performing in privately owned venues, they later acquired the Petrovsky Theatre, which, as a result of fires and erratic redevelopment, would later be rebuilt as today's Bolshoi Theatre. The Bolshoi Ballet is a very hard place to get into. While some guest dancers come and go, from other very prestigious ballet companies—like from the Mariinky and American Ballet Theatre—many company dancers are carefully selected graduates of the academy. The first American ballet dancer to graduate from the Bolshoi Ballet Academy and to join the Bolshoi Ballet company, was Michael Shannon, in 1989.[3]

The early history of the Bolshoi Ballet is very sketchy and, despite staging many famous ballets, it struggled to compete with the reputation of the Imperial Russian Ballet, today's Mariinsky Ballet of St. Petersburg. It was not until the appointment of Alexander Gorsky as Ballet Master in 1900 that the company began to develop its own unique identity, with acclaimed productions of new or restaged ballets including, Don Quixote (1900), Coppélia (1901), Swan Lake (1901), La fille mal gardée (1903), Giselle (1911), Le Corsaire (1912) and La Bayadère (1917).[4]

The Soviet leadership's preference for uncomplicated moral themes in the arts was demonstrated in Yuri Grigorovich's appointment as director in 1964. Grigorovich held his position until 1995, at which point a series of directors, including Boris Akimov, Alexei Ratmansky, Yuri Burlaka and Sergei Filin, brought to the company more modern ideas about dance performance.[5]

Anastasia Volochkova has claimed that female dancers were forced to sleep with wealthy patrons. She said: “It mainly happened with the corps du [sic] ballet but also with the soloists. [...] I repeatedly received such propositions to share the beds of oligarchs." [6] American dancer Joy Womack echoed this concern when she left the company because she was told that, to secure solo roles she must either pay $10,000 or "start a relationship with a sponsor."[7]

Another large source of controversy was the January 2013 sulfuric acid attack on the artistic director, Sergei Filin; Bolshoi dancer, Pavel Dmitrichenko, was convicted of organizing the attack and sentenced to 6 years in prison. Reasons for the attack again include corruption within the company.[8] 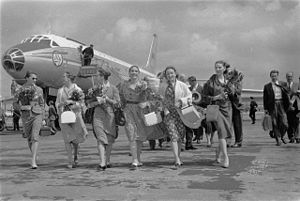 Arrival of soloists of the Bolshoi Ballet at the Schiphol airport, 9 June 1960

Today the Bolshoi Ballet remains one of the worlds foremost ballet companies, as well as being the largest, with approximately 220 dancers. Indeed, the very name "bolshoi" means "big" or "grand" in Russian. The company operates a hierarchical system, similar to those used by other leading European ballet companies, with senior dancers ranked as principals, and descending in order of importance through lead soloist, first soloist, soloist and finally corps de ballet. Due to its size, the company operates two troupes of corps de ballet.

The performance style of the Bolshoi Ballet, is typically identified as being colourful and bold, combining technique and athleticism with expressiveness and dramatic intensity. This style is commonly attributed to Gorsky. The Bolshoi has a historical rivalry with St. Petersburg heritage ballet company, the Mariinsky. Both have developed very different performing styles: the Bolshoi has a more colourful and bold approach, whereas the Mariinsky is associated with pure and refined classicism.

It was announced 30 January 2013, that Svetlana Lunkina told the Russian newspaper Izvestia that she wants to remain in Canada, because she fears for her safety if she returned to Russia.[14]