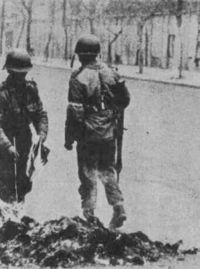 Book censorship is the removal of a book from the shelf of a library. It can be enacted at the national or subnational level, and can carry legal penalties. Books may also be challenged at a local community level, although successful bans do not extend outside that area. Similarly, religions may issue lists of banned books—a historical example being the Roman Catholic Church's Index Librorum Prohibitorum—which do not always carry legal force.

"Almost every country places some restrictions on what may be published, although the emphasis and the degree of control differ from country to country and at different periods."[1] There are a variety of reasons for which books may be banned. Materials are often suppressed due to the perceived notion of obscenity. This obscenity can apply to materials that are about sexuality, race, drugs, or social standing.[2] The censorship of literature on the charge of obscenity appears to have begun in the early 19th century.[3] The rise of the middle class, who had evangelical backgrounds, brought about this concern with obscenity.[3]

Governments have also sought to ban certain books which they perceive to contain material that could threaten, embarrass, or criticize them.[4]

Other leaders outside of the government have banned books, including religious authorities.[5] Church leaders who prohibit members of their faith from reading the banned books may want to shelter them from perceived obscene, immoral, or profane ideas or situations or from ideas that may challenge the teaching of that religion.[6]

Book burning is the practice of destroying, often ceremonially, books or other written material. It is usually carried out in public, and is generally motivated by moral, religious, or political objections to the material, with a desire to censor it. 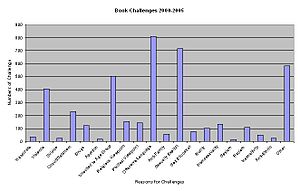 This graph shows the number of book challenges from 2000-2005 and the most popular reasons for the challenges
Main article: List of most commonly challenged books in the United States