From Infogalactic: the planetary knowledge core
Jump to: navigation, search
This article is about the Biblical book. For other uses, see Judge (disambiguation).

The Book of Judges (Hebrew: Sefer Shoftim ספר שופטים) is the seventh book of the Hebrew Bible and the Christian Bible. Its title describes its contents: it contains the history of Biblical judges, divinely inspired leaders whose direct knowledge of Yahweh allows them to act as champions for the Israelites from oppression by foreign rulers, and models of wise and faithful behaviour required of them by their God Yahweh following the exodus from Egypt and the conquest of Canaan.[1] The stories follow a consistent pattern: the people are unfaithful to Yahweh and he therefore delivers them into the hands of their enemies; the people repent and entreat Yahweh for mercy, which he sends in the form of a leader or champion (a "judge"); the judge delivers the Israelites from oppression and they prosper, but soon they fall again into unfaithfulness and the cycle is repeated.[2] Scholars consider many of the stories in Judges to be the oldest in the Deuteronomistic history with their major redaction dated to the 8th century BC and with materials (such as the Song of Deborah) dating from much earlier, perhaps close to the period the book depicts.[3][4]

The book opens with the Israelites in the land which God has promised to them but worshiping "foreign gods" instead of Yahweh, the God of Israel, and with the Canaanites still present everywhere.[6] Chapters 1:1–2:5 are thus a confession of failure while chapters 2:6–3:6 are a major summary and reflection from the Deuteronomists.[7]

The opening thus sets out the pattern which the stories in the main text will follow:[5]

Once peace was regained, for a time Israel does right and receives Yahweh's blessings, only to later relapse into doing evil and repeating the pattern set forth above. 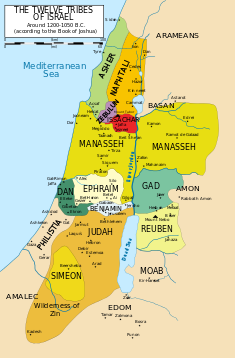 Map of the tribes of Israel.

Next comes the main text (3:11–16:31), six accounts each concerning a major judge and their struggles against the oppressive kings of surrounding nations, plus the story of Abimelech, an Israelite who oppresses his own people. The cyclic pattern set out in the prologue is readily apparent at the beginning, but as the stories progress it begins to disintegrate, mirroring the disintegration of the world of the Israelites.[5] The stories are not presented in chronological order,[8] but the judges as they appear in the text are:

There are also brief glosses on "minor" judges: Shamgar (3:31), Tola and Jair (10:1–5), Ibzan, Elon, and Abdon (12:8–15).[9] Some scholars have inferred that the minor judges were actual adjudicators, whereas the major judges were leaders and didn't actually make legal judgements.[10] The only time a major judge is said to have made legal judgments was Deborah (4:4).[11]

By the end of Judges the Israelites are in a worse condition than they were at the beginning, with Yahweh's treasures used to make idolatrous images, the Levites (priests) corrupted, the tribe of Dan conquering a remote village instead of the Canaanite cities, and the tribes of Israel making war on the Benjamites, their own brothers.[13]

Despite their appearance at the end of the Book of Judges, certain characters (like Jonathan, the grandson of Moses) and idioms present in the epilogue show that the events therein "must have taken place ... early in the period of the judges."[14]

Judges contains a chronology of its events. It is overtly schematic, and shows signs of having been introduced at a later period.[15]

"Gideon thanks God for the miracle of the dew", painting by Maarten van Heemskerck (Musée des Beaux-Arts de Strasbourg)

The basic source for Judges was a collection of loosely connected stories about tribal heroes who saved the people in battle.[16] This original "book of saviours," made up of the stories of Ehud, Jael and parts of Gideon, had already been enlarged and transformed into "wars of Yahweh" before being given the final Deuteronomistic revision.[17] In the 20th century the first part of the prologue (chapters 1:1–2:5) and the two parts of the epilogue (17–21) were commonly seen as miscellaneous collections of fragments tacked onto the main text, and the second part of the prologue (2:6–3:6) as an introduction composed expressly for the book; this view has been challenged in the latter decades of the century, and there is an increasing willingness to see Judges as the work of a single individual, working by carefully selecting, reworking and positioning his source material to introduce and conclude his themes.[18] A statement repeated throughout the book, "In those days there was no king in Israel; every man did that which was right in his own eyes," implies a monarchist redaction.[19] The epilogue, in which Judah is assigned a leadership role twice, implies pro-Judah political leanings on the part of the author.[20]

Since the second half of the 20th century most scholars have agreed with Martin Noth's thesis that the books of Deuteronomy, Joshua, Judges, Samuel and Kings form parts of a single work.[21] Noth maintained that the history was written in the early Exilic period (6th century BC) in order to demonstrate how Israel's history was worked out in accordance with the theology expressed in the book of Deuteronomy (which thus provides the name "Deuteronomistic").[22] Noth believed that this history was the work of a single author, living in the mid-6th century BC, selecting, editing and composing from his sources to produce a coherent work.[23] Frank Moore Cross later proposed that an early version of the history was composed in Jerusalem in Josiah's time (late 7th century); this first version, Dtr1, was then revised and expanded to create a second edition, that identified by Noth, and which Cross labelled Dtr2.[24]

Scholars agree that the Deuteronomists' hand can be seen in Judges through the book's cyclical nature: the Israelites fall into idolatry, God punishes them for their sins with oppression by foreign peoples, the Israelites cry out to God for help, and God sends a judge to deliver them from the foreign oppression. After a brief period of peace, the cycle repeats. Scholars also suggest that the Deuteronomists also included the humorous and sometimes disparaging commentary found in the book such as the story of the Ephraimites who could not pronounce the word "shibboleth" correctly (12:5–6).[25] However, linguistic analysis, the negative portrayal of the northern tribes, and the lack of emphasis on prophecy, worship, or a centralized cult all suggest that the main redaction of Judges was done before the Deuteronomistic period (around the time of the destruction of the Northern Kingdom of Israel in 722).[26] 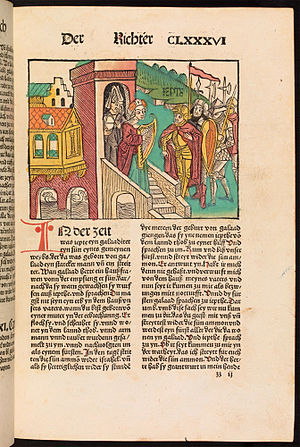 The essence of Deuteronomistic theology is that Israel has entered into a covenant (a treaty, a binding agreement) with the god Yahweh, under which they agree to accept Yahweh as their god (hence the phrase "God of Israel") and Yahweh promises them a land where they can live in peace and prosperity. Deuteronomy contains the laws by which Israel is to live in the promised land, Joshua chronicles the conquest of Canaan, the promised land, and its allotment among the tribes, Judges describes the settlement of the land, Samuel the consolidation of the land and people under David, and Kings the destruction of kingship and loss of the land.[27] The final tragedy described in Kings is the result of Israel's failure to uphold its part of the covenant: faithfulness to Yahweh brings success, economic, military and political, but unfaithfulness brings defeat and oppression.[28]

This is the theme played out in Judges: the people are unfaithful to Yahweh and he therefore delivers them into the hands of their enemies; the people then repent and entreat Yahweh for mercy, which he sends in the form of a judge; the judge delivers the Israelites from oppression, but after a while they fall into unfaithfulness again and the cycle is repeated.[2]

Further themes are also present: the "sovereign freedom of Yahweh" (God does not always do what is expected of him); the "satirisation of foreign kings" (who consistently underestimate Israel and Yahweh); the concept of the "flawed agent" (judges who are not adequate to the task before them) and the disunity of the Israelite community (which gathers pace as the stories succeed one another).[29]

The book is as intriguing for the themes it leaves out as for what it includes: the ark of the covenant, which is given so much importance in the stories of Moses and Joshua, is almost entirely missing, cooperation between the various tribes is limited, and there is no mention of a central shrine for worship or of a high priest (the office to which Aaron was appointed at the end of the Exodus story).[30]

Although Judges probably had a monarchist redaction (see above), the book contains passages and themes that represent anti-monarchist views. One of the major themes of the book is Yahweh's sovereignty and the importance of being loyal to Him and His laws above all other gods and sovereigns. Indeed, the authority of the judges comes not through prominent dynasties nor through elections or appointments, but rather through the spirit of God.[31] Anti-monarchist theology is most apparent toward the end of the Gideon cycle in which the Israelites beg Gideon to create a dynastic monarchy over them and Gideon refuses.[32] The rest of Gideon's lifetime saw peace in the land, but after Gideon's death, his son Abimelech ruled Shechem as a Machiavellian tyrant guilty for much bloodshed (see chapters 8 and 9). However, the last few chapters of Judges (specifically, the stories of Samson, Micah, and Gibeah) highlight the violence and anarchy of decentralized rule.[33]

Judges is remarkable for the number of female characters who "play significant roles, active and passive, in the narratives."[11] Rabbi Joseph Telushkin wrote, "Most of the great women in the Bible either are married to a great man or related to one. ... A rare exception to this tradition is the prophetess and judge Deborah, perhaps the Bible's greatest woman figure. Deborah stands exclusively on her own merits. The only thing we know about her personal life is the name of her husband, Lapidot."[34]