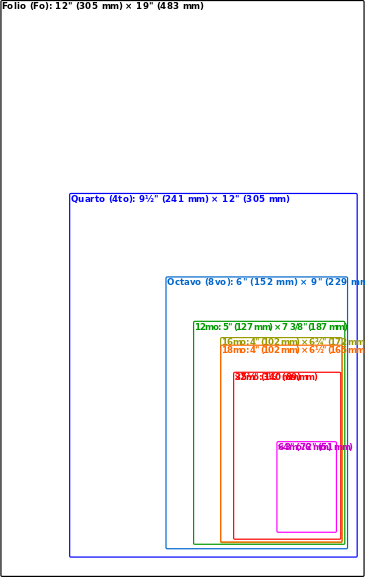 The size of a book is generally measured by the height against the width of a leaf, or sometimes the height and width of its cover.[1] A series of terms is commonly used by libraries and publishers for the general sizes of modern books, ranging from folio (the largest), to quarto (smaller) and octavo (still smaller). Historically, these terms referred to the format of the book, a technical term used by printers and bibliographers to indicate the size of a leaf in terms of the size of the original sheet. For example, a quarto (from Latin quartō, ablative form of quartus, fourth[2]) historically was a book printed on a sheet of paper folded twice to produce four leaves (or eight pages), each leaf one fourth the size of the original sheet printed. Because the actual format of many modern books cannot be determined from examination of the books, bibliographers may not use these terms in scholarly descriptions.

In the hand press period (up to about 1820) books were manufactured by printing text on both sides of a full sheet of paper and then folding the paper one or more times into a group of leaves or gathering. The binder would sew the gatherings (sometimes also called signatures) through their inner hinges and attached to cords in the spine to form the book block. Before the covers were bound to the book, the block of text pages was sometimes trimmed along the three unbound edges to open the folds of the paper and to produce smooth edges for the book. When the leaves were not trimmed, the reader would have to cut open the leaf edges using a knife.

Books made by printing two pages of text on each side of a sheet of paper, which is then folded once to form two leaves or four pages, are referred to as folios (from Latin, foliō, ablative of folium, leaf[2]). Those made by printing four text pages on each side of a sheet of paper and folding the paper twice to form a gathering containing four leaves or eight pages are called quartos (fourths). Similarly, books made by printing eight pages of text on each side of a sheet, which was then folded three times to form gatherings of eight leaves or sixteen pages each, are called octavos. The size of the resulting pages in these cases depends, of course, on the size of the full sheet used to print them and how much the leaves were trimmed before binding, but where the same size paper is used, folios are the largest, followed by quartos and then octavos.[3]:80–81 The proportion of leaves of quartos tends to be squarer than folios or octavos.[4]:164

There are many variations in how such books were produced. For example, folios were rarely made by simply binding up a group of two leaf gatherings; instead several printed leaf pairs would be inserted within another, to produce a larger gathering of multiple leaves that would be more convenient for binding.[4]:30–31 For example, three two-leaf printed sheets might be inserted in a fourth, producing gatherings of eight leaves or sixteen pages each. Bibliographers still refer to such books as folios (and not octavos) because the original full sheets were folded once to produce two leaves, and describe such gatherings as folios in 8s. Similarly, a book printed as an octavo, but bound with gatherings of four leaves each, is called an octavo in 4s.[4]:28

In determining the format of a book, bibliographers will study the number of leaves in a gathering, their proportion and sizes and also the arrangement of the chain lines and watermarks in the paper.[3]:84–107

As printing and paper technology developed, it became possible to produce and to print on much larger sheets or rolls of paper and it may not be apparent (or even possible to determine) from examination of a modern book how the paper was folded to produce them. For example, a modern novel may consist of gatherings of sixteen leaves, but may actually have been printed with sixty-four pages on each side of a very large sheet of paper.[5]:429 Similarly, the actual printing format cannot be determined for books that are perfect bound, where every leaf in the book is completely cut out (i.e., not conjugate to another leaf as in gatherings) and is glued into the spine. Modern books are commonly called folio, quarto and octavo based simply on their size rather than the format in which they were actually produced, if that can even be determined. Scholarly bibliographers may describe such books based on the number of leaves in each gathering (eight leaves per gathering forming an octavo), even where the actual number of pages printed on the original sheet is unknown[3]:80–81 or may reject the use of these terms for modern books entirely.[note 1]

Today, octavo and quarto are the most common book sizes, but many books are produced in larger and smaller sizes as well. Other terms for book size have developed, an elephant folio being up to 23 inches tall, an atlas folio 25 inches, and a double elephant folio 50 inches tall.

According to Guinness World Records, the largest book in the world is Bhutan: A Visual Odyssey Across the Last Himalayan Kingdom by Michael Hawley, which measures 1.5 m x 2.1 m (5 feet x 7 feet).[6]

During the hand press period, full sheets of paper were manufactured in a great variety of sizes which were given a number of names, such as pot, demy, foolscap, crown, etc. These were not standardized and the actual sizes varied depending on the country of manufacture and date.[3]:67–70, 73–75

The size and proportions of a book will thus depend on the size of the original sheet of paper used in producing the book. For example, if a sheet 19 inches by 25 inches is used to print a quarto, the resulting book will be approximately 12.5 inches tall and 9.5 inches wide, before trimming. Because the size of paper used has differed over the years and localities, the sizes of books of the same format will also differ. A typical octavo printed in Italy or France in the 16th Century thus is roughly the size of a modern mass market paperback book, but an English 18th-century octavo is noticeably larger, more like a modern trade paperback or hardcover novel.

The following table is adapted from the scale of the American Library Association,[7][8] in which size refers to the dimensions of the cover (trimmed pages will be somewhat smaller, often by about ¼ inch or 5 mm[1]):

A number of imposition schemes for different formats may be found in:

Additional tables and discussion of American book formats and sizes may be found in: