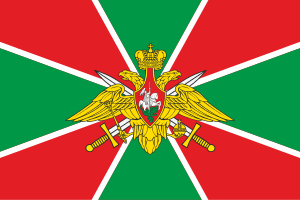 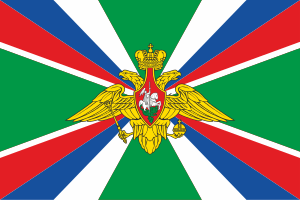 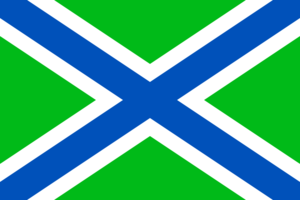 Flag of the Coast Guard of the Border Service of the FSB.

Border Guards were created in the Russian Empire in the 18th century, however, the origin of the Russian border service can be traced to Prince Mikhail Vorotynsky and his Great Abatis Border in the 16th century. In 1782 Catherine II of Russia created Border Customs Guards originally manned by Russian Cossacks as well as low-ranking cavalry troops. General Mikhail Barklay de Tolly organized in 1810 numerous border posts consisted of 11 regiments of Don and Bug Cossacks along all Western Russian border. Within two years Russian Border Guards were first to fight the Napoleon's invasion of Russia. In 1832 Cossacks and cavalry were replaced by armed customs officials subordinate to the ministry of finance in peacetime (in wartime the border guards were automatically transferred to the army). In the same year the coast guard was created, originally to observe Black sea and Azov sea coasts.

In 1893 Count Sergei Witte Russian minister of finance in the Alexander III's government reformed the service on October 13 that year into the Independent Border Guards Corps, a para-military rather than civilian organization headed by an army general and reporting directly to the ministry.

In 1906 about 40 000 soldiers and officers served in the IBGC responsible for the defence of the vast Imperial border. They served in 8 division sized districts as well as in the Saint Petersburg headquarters unit.

Soviet Border Troops, (Russian: Пограничные войска СССР, Pogranichnyie Voiska SSSR) were the militarized border guard of the Soviet Union, subordinated to its subsequently reorganized state security agency: first to Cheka/OGPU, then to NKVD/MGB and, finally, to KGB. Accordingly, they were known as NKVD Border Troops and KGB Border Troops (with Russian abbreviations - НКВД СССР/- КГБ СССР added on the end of official names). Unlike border guards of many other countries, Soviet Border Troops were a centralized force including also the maritime border guard units (i.e., a coast guard). 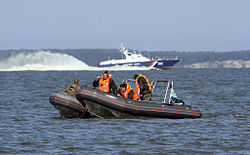 Border guards of the Federal Security Service in Kaliningrad region, 2011

Following the collapse of the Soviet Union, Federal Border Guard Service of Russia was created on December 30, 1993, and given a status of separate government agency. This organization retained some old traditions, most notably the dark green-colored uniform and "Border Guarder's Day" (an official holiday commemorated by celebrations of ex-servicemen). First minister of FBS (Federal Border Service) was Andrei Nikolayev, young and outspoken general who later became deputy of the State Duma. Russian Border Guards were also stationed outside of Russia most notably in southern Tajikistan, in order to guard the border with Afghanistan, until summer 2005. On Afghan-Tajik border on many occasions they were engaged in heavy fighting with drug-traffickers and Islamic extremists. Armenia's border with Turkey and Iran is also still guarded by the Russians. On March 11, 2003, Russian president Vladimir Putin changed the status of Border Guard Service from a separate agency into a branch of Russian Federal Security Service. The current head of Border Guard Service of Russia is General Vladimir Pronichev. Border Guard Service of Russia is still tasked with a defence of the longest national border in the world.

In April 2012 Vladimir Pronichev announced that the country was planning to build 20 frontier posts in the Arctic region. Reasons for this development can be found in the increased abilities to explore hydrocarbon deposits in the north. It will also give Russia an ability to patrol and service the Northern Sea Route.[1]

In July 2014 Ukraine opened a criminal case against the head of the Border Guard Service Vladimir Kulishov; he was accused of financing “illegal military groups” in Eastern Ukraine who at the time fought against the Ukrainian army.[2][3][4]

Responsibilities of Border Guard Service of Russia include: 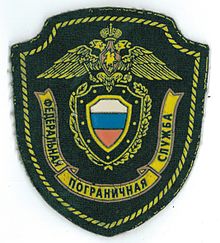 Changes in the regional structure of the Border Service, instead of ten regional border (see the old structures FPS) for the new scheme includes regional offices of the border (in the federal districts) and 30 border offices. Includes the Maritime Border Guard.

Enterprises, institutions and organizations which are subordinate to the Border Service: