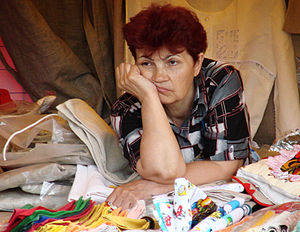 A souvenir seller appears bored as she waits for customers.

In conventional usage, boredom is an emotional or psychological state experienced when an individual is left without anything in particular to do, is not interested in his or her surroundings, or feels that a day or period is dull or tedious. It is also understood by scholars as a modern phenomenon which has a cultural dimension. In Experience Without Qualities: Boredom and Modernity, Elizabeth Goodstein traces the modern discourse on boredom through literary, philosophical, and sociological texts to find that as "a discursively articulated phenomenon...boredom is at once objective and subjective, emotion and intellectualization — not just a response to the modern world but also an historically constituted strategy for coping with its discontents."[1] In both conceptions, boredom has to do fundamentally with an experience of time and problems of meaning. 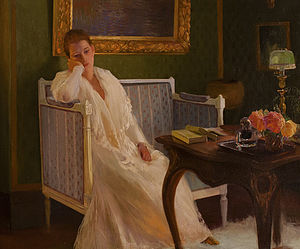 Different scholars use different definitions of boredom, which complicates research.[6] Boredom has been defined by Cynthia D. Fisher in terms of its main central psychological processes: "an unpleasant, transient affective state in which the individual feels a pervasive lack of interest and difficulty concentrating on the current activity."[7] Mark Leary et al. describe boredom as "an affective experience associated with cognitive attentional processes."[8] In positive psychology, boredom is described as a response to a moderate challenge for which the subject has more than enough skill.[9]

There are three types of boredom, all of which involve problems of engagement of attention. These include times when we are prevented from engaging in wanted activity, when we are forced to engage in unwanted activity, or when we are simply unable for no apparent reason to maintain engagement in any activity or spectacle.[10] Boredom proneness is a tendency to experience boredom of all types. This is typically assessed by the Boredom Proneness Scale.[11] Recent research has found that boredom proneness is clearly and consistently associated with failures of attention.[12] Boredom and its proneness are both theoretically and empirically linked to depression and similar symptoms.[13][14][15] Nonetheless, boredom proneness has been found to be as strongly correlated with attentional lapses as with depression.[13] Although boredom is often viewed as a trivial and mild irritant, proneness to boredom has been linked to a very diverse range of possible psychological, physical, educational, and social problems.[16]

Boredom is a condition characterized by perception of one's environment as dull, tedious, and lacking in stimulation. This can result from leisure and a lack of aesthetic interests. Labor, however, and even art may be alienated and passive, or immersed in tedium. There is an inherent anxiety in boredom; people will expend considerable effort to prevent or remedy it, yet in many circumstances, it is accepted as suffering to be endured. Common passive ways to escape boredom are to sleep or to think creative thoughts (daydream). Typical active solutions consist in an intentional activity of some sort, often something new, as familiarity and repetition lead to the tedious. 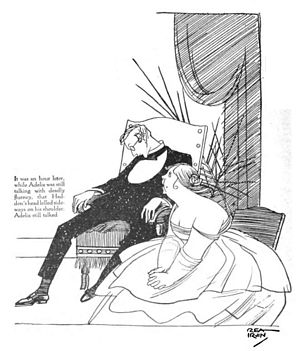 During the fin de siècle, the French term for the end of the 19th century in the West, some of the cultural hallmarks included "ennui", cynicism, pessimism, and "...a widespread belief that civilization leads to decadence."[17]Boredom also plays a role in existentialist thought. In contexts where one is confined, spatially or otherwise, boredom may be met with various religious activities, not because religion would want to associate itself with tedium, but rather, partly because boredom may be taken as the essential human condition, to which God, wisdom, or morality are the ultimate answers. It is taken in this sense by virtually all existentialist philosophers as well as by Arthur Schopenhauer.

Martin Heidegger wrote about boredom in two texts available in English, in the 1929/30 semester lecture course The Fundamental Concepts of Metaphysics, and again in the essay What is Metaphysics? published in the same year. In the lecture, Heidegger included about 100 pages on boredom, probably the most extensive philosophical treatment ever of the subject. He focused on waiting at railway stations in particular as a major context of boredom.[18] Søren Kierkegaard remarks in Either/Or that "patience cannot be depicted" visually, since there is a sense that any immediate moment of life may be fundamentally tedious.

Blaise Pascal in the Pensées discusses the human condition in saying "we seek rest in a struggle against some obstacles. And when we have overcome these, rest proves unbearable because of the boredom it produces", and later states that "only an infinite and immutable object – that is, God himself – can fill this infinite abyss."[19]

Without stimulus or focus, the individual is confronted with nothingness, the meaninglessness of existence, and experiences existential anxiety. Heidegger states this idea as follows: "Profound boredom, drifting here and there in the abysses of our existence like a muffling fog, removes all things and men and oneself along with it into a remarkable indifference. This boredom reveals being as a whole."[20] Schopenhauer used the existence of boredom in an attempt to prove the vanity of human existence, stating, "...for if life, in the desire for which our essence and existence consists, possessed in itself a positive value and real content, there would be no such thing as boredom: mere existence would fulfil and satisfy us."[21]

Erich Fromm and other thinkers of critical theory speak of boredom as a common psychological response to industrial society, where people are required to engage in alienated labor. According to Fromm, boredom is "perhaps the most important source of aggression and destructiveness today." For Fromm, the search for thrills and novelty that characterizes consumer culture are not solutions to boredom, but mere distractions from boredom which, he argues, continues unconsciously.[22] Above and beyond taste and character, the universal case of boredom consists in any instance of waiting, as Heidegger noted, such as in line, for someone else to arrive or finish a task, or while one is travelling somewhere. The automobile requires fast reflexes, making its operator busy and hence, perhaps for other reasons as well, making the ride more tedious despite being over sooner. 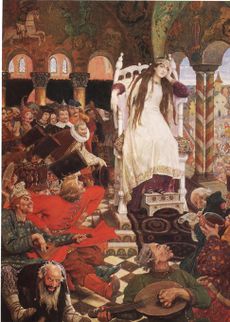 The Princess Who Never Smiled by Viktor Vasnetsov

Although it has not been widely studied, research on boredom suggests that boredom is a major factor impacting diverse areas of a person's life. People ranked low on a boredom-proneness scale were found to have better performance in a wide variety of aspects of their lives, including career, education, and autonomy.[23] Boredom can be a symptom of clinical depression. Boredom can be a form of learned helplessness, a phenomenon closely related to depression. Some philosophies of parenting propose that if children are raised in an environment devoid of stimuli, and are not allowed or encouraged to interact with their environment, they will fail to develop the mental capacities to do so.

In a learning environment, a common cause of boredom is lack of understanding; for instance, if one is not following or connecting to the material in a class or lecture, it will usually seem boring. However, the opposite can also be true; something that is too easily understood, simple or transparent, can also be boring. Boredom is often inversely related to learning, and in school it may be a sign that a student is not challenged enough, or too challenged. An activity that is predictable to the students is likely to bore them.[24]

A 1989 study indicated that an individual's impression of boredom may be influenced by the individual's degree of attention, as a higher acoustic level of distraction from the environment correlated with higher reportings of boredom.[25]

It has been suggested that boredom has an evolutionary basis that encourages humans to seek out challenges. It may influence human learning and ingenuity. [28]

In Chapter 18 of the novel The Picture of Dorian Gray by Oscar Wilde (1854–1900), the character Lord Henry Wotton says to a young Dorian Gray: "The only horrible thing in the world is ennui, Dorian. That is the one sin for which there is no forgiveness." Procol Harum, John Sebastian, Iggy Pop, the Deftones, Buzzcocks, and Blink-182 have all written songs with boredom mentioned in the title. Other songs about boredom and activities people turn to when bored include Green Day's song "Longview", System of a Down's "Lonely Day", and Bloodhound Gang's "Mope". Douglas Adams depicted a robot named Marvin the Paranoid Android whose boredom appeared to be the defining trait of his existence in The Hitchhiker's Guide to the Galaxy.