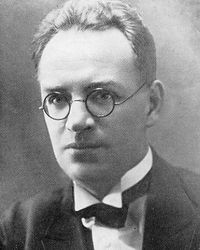 He was born Boris Andreyevich Vogau (Russian: Бори́с Андре́евич Вога́у) in Mozhaysk. His father was a doctor of German descent, and his mother came from an old merchant family from Saratov. Boris first became interested in writing at the age of nine. Among his early influences were Andrei Bely, Aleksey Remizov, and Yevgeny Zamyatin.[1]

He was a major supporter of anti-urbanism and a critic of mechanized society. These views often brought him into disfavor with Communist critics. His most famous works are The Naked Year (Голый год, 1922; translated into English 1928), Mahogany (Кра́сное де́рево, 1927, translated 1965), and The Volga Falls into the Caspian Sea (Волга впадает в Каспийское море, 1930; translated 1931), all novels concerning revolutionary and post-revolutionary Russia. Another of his well-known works is Okay! An American Novel, (О’кей! Американский роман, 1931; translated 1932), an unflattering travelogue of his 1931 visit to the United States. He visited Japan at this point also and used that journey to write A story about how stories come to be written.

In Artists in Uniform, Max Eastman wrote a chapter about him called "The Humiliation of Boris Pilnyak."[2]

Secretly investigated by the NKVD, he was arrested October 28, 1937 on charges of counter-revolutionary activities, (namely, Trotskyism), spying for Japan,[3] and terrorism. One police report alleged that "he held secret meetings with André Gide, and supplied him with information about the situation in the USSR. There is no doubt that Gide used this information in this book attacking the USSR."

Pilnyak was tried on April 21, 1938. In the proceeding that lasted 15 minutes, he was condemned to death. A small yellow slip of paper attached to his file read: "Sentence carried out."[4] He was executed with a bullet to the back of the head.[5]

He began to be rehabilitated and appreciated again in the USSR in the late 1960s and 1970s.[6]