Boris Borisovich Piotrovsky (Russian: Бори́с Бори́сович Пиотро́вский; also written Piotrovskii; February 14 [O.S. February 1] 1908 – October 15, 1990) was a Soviet Russian academician, historian-orientalist and archaeologist who studied the ancient civilizations of Urartu, Scythia, and Nubia. He is best known as a key figure in the study of the Urartian civilization of the southern Caucasus.[1] From 1964 until his death, Piotrovsky was also Director of the Hermitage Museum in Saint Petersburg.

Piotrovsky was born in Saint Petersburg in 1908. He specialized in the history and archaeology of the Caucasus region and beginning in the 1930s, he began to acquaint himself with Urartian civilization. He was the head of 1939 excavations that uncovered the Urartian fortress of Teishebaini in Armenia (known in Armenian as Karmir Blur, or Red Hill). Evidence found there has been key in understanding the Urartian civilization. Piotrovsky lead further excavations in Armenia in the ancient settlements of Tsovinar, Redkig-lager, Vanadzor (formerly Kirovakan) and Aygevan until 1971.[2] 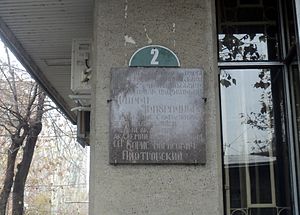 These were not Piotrovsky's sole contributions in the archaeological field, however. Piotrovsky worked elsewhere in the Caucasus, especially on the Scythian culture. In 1961, he was placed at the head of an expedition of the USSR Academy of Sciences to study Nubian monuments in Egypt.[3] He also spent 26 years as Director of the Hermitage Museum, which has been run by his son Mikhail thereafter. The Hermitage holds an annual conference in his honor. He died of a cerebral hemorrhage in Leningrad 1990 at the age of 82.[1]

In his lifetime, he published more than 200 works in the fields of archaeology, history and art.[1] One of Piotrovsky's most important works is The History of Urartu and its Culture, published in 1944 and which went on to receive the USSR State Prize in 1946.[2] Other notable works include: