He was born to a peasant family in the village of Sinyavino in the Plavsky District, Tul'skaya oblast on 26 August 1915. After graduating for seven grades, he entered the Tula Railway Training School in the late 1920s. While studying at an industrial college, he joined the local flying school, where his instructor was Valentina Grizodubova, who later became a celebrated military pilot. He was conscripted into the Red Army in 1933 and on completing his flying training at the Kachin Higher Military Aviation School, was posted to the Belorussian Military District. He served in the 106th Fighter Aviation Squadron named after Dzerzhinsky of the 2nd Aviation Brigade.[1] In 1939, he joined the Communist Party of the Soviet Union. In 1940, he requested a transfer to the Northern Fleet Air Force.[2] 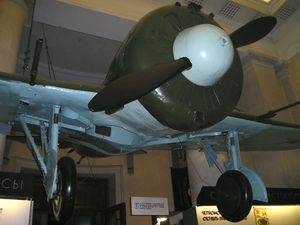 Safonov's Polikarpov I-16 fighter, displayed at the Central Naval Museum in Saint Petersburg.

At the beginning of the German-Soviet War, Safonov was based at Vaenga (now called Severomorsk) on the Murmansk Front, commanding the 4th Squadron of the 72 SAP VVS VMF (72nd Mixed Aviation Regiment of the Soviet Naval Aviation) flying the Polikarpov I-16 fighter.[3] A widely circulated photograph of Safonov showed him with an I-16 bearing the slogan "For Stalin!" on its fuselage, although this probably wasn't his personal machine.[4] On 24 June 1941, he shot down a Junkers Ju-88 bomber on a reconnaissance flight; the first by the Northern Fleet.

In September 1941, No. 151 Wing RAF arrived at Vaenga by sea, with thirty nine Hawker Hurricane fighters which they were to train the Soviet personnel to operate and then hand over. Safonov headed the Soviet side of the training programme and made a good impression on his British colleagues, who remembered him as serious and likeable.[5] He took command of a new squadron, 78 IAP VVS VMF (78th Fighter Aviation Regiment of the Soviet Naval Aviation) which was formed to fly the Hurricanes and was largely manned by his pilots from 72 SAP VVS VMF. As a commander, he showed superb organisation and tactical skills, while enforcing strict discipline on his men, once threatening to shoot a pilot who he judged to have returned early from combat. However, he defended a colleague who accidentally shot down a friendly bomber and often gave others the credit for his own kills.[6]

In March 1942, Safonov returned as a lieutenant-colonel to command 72 SAP VVS VMF, now renamed 2 GvSAP VVS VMF (2nd Guards Mixed Aviation Regiment of the Soviet Naval Aviation). On 30 May, he took off for his 234th combat mission, flying a Curtiss P-40E to cover the approach of arctic convoy PQ-16. He shot down three Ju-88s but crashed into the sea following engine failure. The convoy escorts were unable to find him.[4] 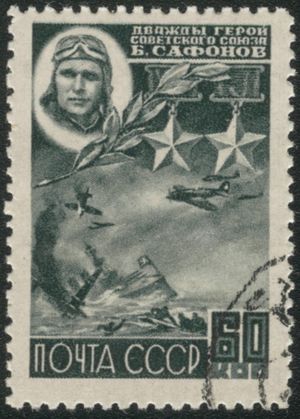 A Soviet postage stamp issued in 1944, showing Safonov, his medals and an imagined combat scene.

Safonovo, a village in the Severomorsk administrative area, is named after Safonov and has a bust of him at the entrance to the settlement. The street where he lived in Severomorsk is also named after him and his former home has a commemorative plaque attached. One of his I-16 aircraft is displayed in the Central Naval Museum in Saint Petersburg. An annual prize for the best naval pilot is also named after him.[8] Safonov's last regiment was renamed Red Banner, Safonov's Second Guards Fighter Aviation Regiment in his honour.[7]