The Bosporan Kingdom, also known as the Kingdom of the Cimmerian Bosporus (Greek: Βασίλειον του Κιμμερικού Βοσπόρου Basileion tou Kimmerikou Bosporou), was an ancient state located in eastern Crimea and the Taman Peninsula on the shores of the Cimmerian Bosporus, the present-day Strait of Kerch. (It was not named after the more famous Bosphorus beside Istanbul at the other end of the Black Sea.) The Bosporan Kingdom was the longest surviving Roman client kingdom. The 1st and 2nd centuries BC saw a period of renewed golden age of the Bosporan state. It was a Roman province from 63 to 68 AD, under Emperor Nero. At the end of the 2nd century AD, King Sauromates II inflicted a critical defeat on the Scythians and included all the territories of the Crimea in the structure of his state.

The prosperity of the Bosporan Kingdom was based on the export of wheat, fish and slaves. The profit of the trade supported a class whose conspicuous wealth is still visible from newly discovered archaeological finds, excavated, often illegally, from numerous burial barrows known as kurgans. The once-thriving cities of the Bosporus left extensive architectural and sculptural remains, while the kurgans continue to yield spectacular Greco-Sarmatian objects, the best examples of which are now preserved in the Hermitage in St. Petersburg. These include gold work, vases imported from Athens, coarse terracottas, textile fragments and specimens of carpentry and marquetry.

Pantikapeon and other ancient Greek colonies along the north coast of the Black Sea, along with their modern names

These Greek colonies were originally settled by Milesians in the 7th and 6th centuries BC. Phanagoria (c. 540 BC) was a colony of Teos, and the foundation of Nymphaeum may have had a connection with Athens; at least it appears to have been a member of the Delian League in the 5th century.

Geography of the Bosporan Kingdom

The Bosporan Kingdom was centred around the Kerch Strait between the Black Sea and the Sea of Azov, known in antiquity as the Cimmerian Bosporus from where the kingdom's name derived.

According to Greek historian Diodorus Siculus (xii. 31) the region was governed between 480 and 438 BC by a line of kings called the Archaeanactidae, probably a ruling family, usurped by a tyrant called Spartocus (438 – 431 BC), who was a Thracian.

Spartocus founded a dynasty which seems to have endured until c. 110 BC, known as the Spartocids. The Spartocids left many inscriptions, indicating that the earliest members of the house ruled under the titles of archons of the Greek cities and kings of various minor native tribes, notably the Sindi (from central Crimea) and other branches of the Maeotae. Surviving material (texts, inscriptions and coins) do not supply enough information to reconstruct a complete chronology of kings of the region. 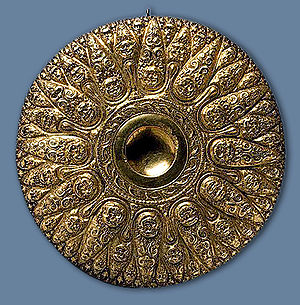 Satyrus (431 – 387 BC), successor to Spartocus, established his rule over the whole region, adding Nymphaeum to his kingdom and besieging Theodosia, which was wealthy because, unlike other cities in the region, it had a port which was free of ice throughout the year, allowing it to trade grain with the rest of the Greek world, even in winter. Satyrus' son Leucon (387 – 347 BC) would eventually take the city. He was succeeded jointly by his two sons, Spartocus II, and Paerisades; Spartocus died in 342, allowing Paerisades to reign alone until 310. After Paerisades' death, a civil war between his sons Satyrus and Eumelus was fought. Satyrus defeated his younger brother Eumelus at the Battle of the River Thatis in 310 BC but was then killed in battle, giving Eumelus the throne.[3]

Eumelus' successor was Spartocus III (303 – 283 BC) and after him Paerisades II. Succeeding princes repeated the family names, so it is impossible to assign them a definite order. The last of them, however, Paerisades V, unable to make headway against increasingly violent attacks from nomadic tribes in the area, called in the help of Diophantus, general of King Mithridates VI of Pontus, leaving him his kingdom. Paerisades was killed by a Scythian named Saumacus who led a rebellion against him.

The house of Spartocus was well known as a line of enlightened and wise princes; although Greek opinion could not deny that they were, strictly speaking, tyrants, they are always described as dynasts. They maintained close relations with Athens, their best customer for the Bosporan grain exports: Leucon I of Bosporus created privileges for Athenian ships at Bosporan ports. The Attic orators make numerous references to this. In return the Athenians granted Leucon Athenian citizenship and made decrees in honour of him and his sons. 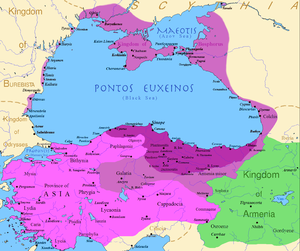 The northern Black sea shores of the Pontic Kingdom (actual Crimea and Kerch peninsula) shown as part of the empire of Mithridates VI of Pontus.

After his defeat by Roman General Pompey in 63 BC, King Mithridates VI of Pontus fled with a small army from Colchis (modern Georgia) over the Caucasus Mountains to Crimea and made plans to raise yet another army to take on the Romans. His eldest living son, Machares, regent of Cimmerian Bosporus, was unwilling to aid his father, so Mithridates had Machares killed, acquiring the throne for himself. Mithridates then ordered the conscriptions and preparations for war. In 63 BC, Pharnaces, the youngest son of Mithridates, led a rebellion against his father, joined by Roman exiles in the core of Mithridates's Pontic army. Mithridates VI withdrew to the citadel in Panticapaeum, where he committed suicide. Pompey buried Mithridates VI in a rock-cut tomb in either Sinope or Amasia,[4] the capital of the Kingdom of Pontus. 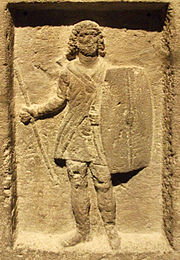 The stele of Staphhilos from the Panticapaeum, depicting a soldier with the traditional Bosporan long hair and beard.

After the death of Mithridates VI (63 BC), Pharnaces II (63  – 47 BC) supplicated to Pompey, and then tried to regain his dominion during Julius Caesar's Civil War, but was defeated by Caesar at Zela and was later killed by his former governor and son-in-law Asander.

Before the death of Pharnaces II, Asander had married Pharnaces II’s daughter Dynamis. Asander and Dynamis were the ruling monarchs until Caesar commanded a paternal uncle of Dynamis, Mithridates II to declare war on the Bosporan Kingdom and claimed the kingship for himself. Asander and Dynamis were defeated by Caesar’s ally and went into political exile. However, after Caesar’s death in 44 BC, the Bosporan Kingdom was restored to Asander and Dynamis by Caesar’s great nephew and heir Octavian. Asander ruled as an archon and later as king until his death in 17 BC. After the death of Asander, Dynamis was compelled to marry a Roman usurper called Scribonius, but the Romans under Agrippa intervened and established Polemon I of Pontus (16 – 8 BC) in his place. Polemon married Dynamis in 16 BC and she died in 14 BC. Polemon ruled as king until his death in 8 BC. After the death of Polemon, Aspurgus, the son of Dynamis and Asander, succeeded Polemon.

The Bosporan Kingdom of Aspurgus was a client state of the Roman Empire, protected by Roman garrisons. Aspurgus (8 BC – 38 AD) founded a dynasty of kings which endured with a couple of interruptions until 341 AD. Aspurgus adopted the Imperial Roman names "Tiberius Julius" when he received Roman citizenship and enjoyed the patronage of the first two Roman Emperors, Augustus and Tiberius. All of the following kings adopted these two Roman names followed by a third name, of Thracian (Kotys, Rhescuporis or Rhoemetalces) or local origin (such as Sauromates, Eupator, Ininthimeus, Pharsanzes, Synges, Terianes, Theothorses or Rhadamsades). 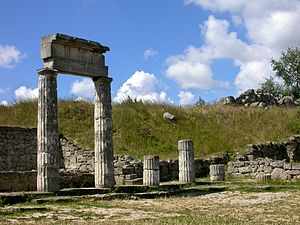 Ruins of Panticapaeum, modern Kerch, the capital of the Bosporan Kingdom.

The Roman client kings of the dynasty had descended from King Mithridates VI of Pontus and his first wife, his sister Laodice, through Aspurgus. The kings adopted a new calendar (the "Pontic Era") introduced by Mithridates VI, starting with 297 BC to date their coins. Bosporan kings struck coinage throughout its period as a client state, which included gold staters bearing portraits of both the Roman emperor and Bosporan king. Like the Roman, Bosporan coinage became increasingly debased during the 3rd century. The coinage makes their lineages fairly clear to historians, though scarcely any events from their reigns are recorded.

The Bosporan Kingdom covered the eastern half of Crimea and the Taman peninsula, and extended along the east coast of the Maeotian marshes to Tanais at the mouth of the Don in the north-east, a great market for trade with the interior. Throughout the period there was perpetual war with the native tribes of Scythians and Sarmatians, and in this the Bosporan Kingdom was supported by its Roman suzerains, who lent the assistance of garrisons and fleets.

The balance of power amongst local tribes was severely disturbed by westward migration in the 3rd–4th centuries. In the 250s AD, the Goths and Borani were able to seize Bosporan shipping and even raid the shores of Anatolia.[6]

With the coins of the last king Rhescuporis VI in 341, constructing a chronology becomes very difficult. The kingdom was probably finally overrun by the Huns, who defeated the nearby Alans in 375/376 and moved rapidly westwards towards the Roman empire.

A few centuries after the Hunnic invasion, the Bosporan cities enjoyed a revival, under Byzantine and Bulgarian protection. The ancient Greek city of Phanagoria became the capital of Old Great Bulgaria between 632 and 665. From time to time Byzantine officers built fortresses and exercised authority at Bosporus, which constituted an archbishopric.

A relevant Byzantine usage of the term is found in a newly discovered seal of a general of the early 11th century as of “Πο<σ>φορ(ου)”, i.e., of the Cimmerian Bosporos.[7]

They also held Tamatarcha on the eastern side of the strait, a town which in the 10th and 11th centuries became the seat of the Kievan Rus principality of Tmutarakan, which in turn gave way to Tatar domination.

Following the Diaspora, and aided by the Khazars, Judaism emerged in the region, and Jewish communities developed in some of the cities of the region (especially Tanais). The Jewish or Thracian influence on the region may have inspired the foundation of a cult to the "Most High God," a distinct regional cult which emerged in the 1st century AD,[2] which professed monotheism without being distinctively Jewish or Christian.[8] 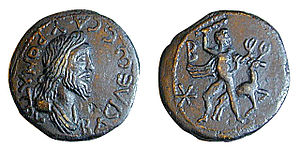 Although considered rare among collectors prior to the demise of the Soviet Union in the early 1990s, Bosporan coins are now well known on the international coin markets, hinting at the quantities produced. Several large series were produced by Bosporan cities from the 5th century BC, particularly in Panticapaeum. Gold staters of Panticapaeum bearing Pan's head and a griffin are especially remarkable for their weight and fine workmanship.

There are coins with the names of the later Spartocids and a complete series of dated solidi issued by the later or Achaemenian dynasty. In them may be noticed the swift degeneration of the gold solidus through silver and potin to bronze.[9]