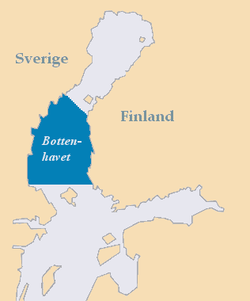 The area of the Bothnian Sea.

The Bothnian Sea (Swedish: Bottenhavet, Finnish: Selkämeri) links the Bothnian Bay (also called the Bay of Bothnia) with the Baltic proper. Kvarken is situated between the two. Together, the Bothnian Sea and Bay make up a larger geographical entity, the Gulf of Bothnia. The whole Gulf of Bothnia is situated between Sweden, to the West, Finland, to the East, and the Sea of Åland and Archipelago Sea to the South. The surface area of Bothnian Sea is approximately 79,000 km². The largest coastal towns, from south to north, are Rauma and Pori in Finland, and Gävle and Sundsvall in Sweden. Umeå (Sweden) and Vaasa (Finland) lie in the extreme north, near Bothnian Bay.