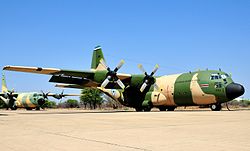 The Air Wing was formed in 1977 and is organisationally part of the Botswana Defence Force.

All squadrons are designated with a Z, which is used as a designation for "squadron". The main base is near Molepolole and was built by mostly foreign contractors between 1992 and 1996. The base is a multi-stage project that included runways, taxiways, extensive shelter and ordnance storage facilities, a headquarters facility and a large complex of living quarters and support buildings. Sometimes referred to as the "Eagle" project, the base has received continual improvements since its inception. Other airports used are Sir Seretse Khama International Airport at Gaborone and Francistown. The airfield near Maun is used as a forward operating location by propeller aircraft as well as there fighters.

The backbone of the Air Wing consists of a squadron of former Canadian CF-116s which are locally designated as BF-5s. Thirteen ex-Canadian CF-116s (ten single-seater CF-5As and three trainer CF-5Bs) were ordered in 1996 to replace the Strikemasters, with another three single-seaters and two dual-seaters delivered in 2000.[Note 1] The aircraft were re-designated OJ-1 through 16. For transport, the Air Wing uses Britten-Norman Defenders, CASA C-212 Aviocars, CASA CN-235s and C-130B Hercules. The latest addition to the transport fleet was an ex-AMARC C-130 Hercules to complement the two existing aircraft.[1]

A combination of Bell 412EP and 412SP helicopters are operated by Z21 and perform a variety of functions, including search and rescue, medivac, anti-poaching and troop/VIP transport. In 1993, nine ex-US Army/AMARC Cessna O-2As were delivered for use against poaching.

In 2011, Pilatus Aircraft Ltd announced that the Botswana Defence Force had selected the PC-7 MkII turboprop trainer aircraft to replace their Pilatus PC-7 fleet which has been in service since 1990. The contract value is approximately 40 million Swiss francs to procure a fleet of five PC-7 MkII turboprop trainer aircraft, with ground-based training system including computer based training, spares, support equipment, as well as pilot and technician conversion training elements. The contract was signed in Gaborone on 13 April 2011.[2] 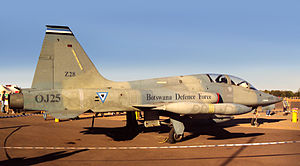 The BDF Air Wing is reportedly interested in acquiring the Saab JAS 39 Gripen fighter jet to replace it's F-5s.[9]

In 2005 Botswana Defence Force (BDF) awarded the Spanish company Indra a €7.1 million contract for the development and implementation of a full air defence command and control system. The project included the development and implementation of an operational control centre, composed of a total of nine air traffic tracking and control posts to process and concentrate the information regarding the country's air space being provided by air surveillance radars, radio communication links with the airships, and air traffic management civil systems.[12][13]