Simulation of periodic waves over an underwater shoal with a Boussinesq-type model. The waves propagate over an elliptic-shaped underwater shoal on a plane beach. This example combines several effects of waves and shallow water, including refraction, diffraction, shoaling and weak non-linearity.

In fluid dynamics, the Boussinesq approximation for water waves is an approximation valid for weakly non-linear and fairly long waves. The approximation is named after Joseph Boussinesq, who first derived them in response to the observation by John Scott Russell of the wave of translation (also known as solitary wave or soliton). The 1872 paper of Boussinesq introduces the equations now known as the Boussinesq equations.[1]

The Boussinesq approximation for water waves takes into account the vertical structure of the horizontal and vertical flow velocity. This results in non-linear partial differential equations, called Boussinesq-type equations, which incorporate frequency dispersion (as opposite to the shallow water equations, which are not frequency-dispersive). In coastal engineering, Boussinesq-type equations are frequently used in computer models for the simulation of water waves in shallow seas and harbours.

Periodic waves in the Boussinesq approximation, shown in a vertical cross section in the wave propagation direction. Notice the flat troughs and sharp crests, due to the wave nonlinearity. This case (drawn on scale) shows a wave with the wavelength equal to 39.1 m, the wave height is 1.8 m (i.e. the difference between crest and trough elevation), and the mean water depth is 5 m, while the gravitational acceleration is 9.81 m/s2.

The essential idea in the Boussinesq approximation is the elimination of the vertical coordinate from the flow equations, while retaining some of the influences of the vertical structure of the flow under water waves. This is useful because the waves propagate in the horizontal plane and have a different (not wave-like) behaviour in the vertical direction. Often, as in Boussinesq's case, the interest is primarily in the wave propagation.

This elimination of the vertical coordinate was first done by Joseph Boussinesq in 1871, to construct an approximate solution for the solitary wave (or wave of translation). Subsequently, in 1872, Boussinesq derived the equations known nowadays as the Boussinesq equations.

The steps in the Boussinesq approximation are:

Thereafter, the Boussinesq approximation is applied to the remaining flow equations, in order to eliminate the dependence on the vertical coordinate. As a result, the resulting partial differential equations are in terms of functions of the horizontal coordinates (and time).

As an example, consider potential flow over a horizontal bed in the (x,z) plane, with x the horizontal and z the vertical coordinate. The bed is located at z = −h, where h is the mean water depth. A Taylor expansion is made of the velocity potential φ(x,z,t) around the bed level z = −h:[2]

where φb(x,t) is the velocity potential at the bed. Invoking Laplace's equation for φ, as valid for incompressible flow, gives:

since the vertical velocity ∂φ / ∂z is zero at the – impermeable – horizontal bed z = −h. This series may subsequently be truncated to a finite number of terms.

For water waves on an incompressible fluid and irrotational flow in the (x,z) plane, the boundary conditions at the free surface elevation z = η(x,t) are:[3]

Now the Boussinesq approximation for the velocity potential φ, as given above, is applied in these boundary conditions. Further, in the resulting equations only the linear and quadratic terms with respect to η and ub are retained (with ub = ∂φb / ∂x the horizontal velocity at the bed z = −h). The cubic and higher order terms are assumed to be negligible. Then, the following partial differential equations are obtained:

This set of equations has been derived for a flat horizontal bed, i.e. the mean depth h is a constant independent of position x. When the right-hand sides of the above equations are set to zero, they reduce to the shallow water equations.

Under some additional approximations, but at the same order of accuracy, the above set A can be reduced to a single partial differential equation for the free surface elevation η:

From the terms between brackets, the importance of nonlinearity of the equation can be expressed in terms of the Ursell number. In dimensionless quantities, using the water depth h and gravitational acceleration g for non-dimensionalization, this equation reads, after normalization:[4] 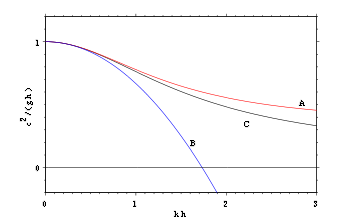 The linear frequency dispersion characteristics for the above set A of equations are:[5]

The relative error in the phase speed c for set A, as compared with linear theory for water waves, is less than 4% for a relative wave number kh < ½ π. So, in engineering applications, set A is valid for wavelengths λ larger than 4 times the water depth h.

The linear frequency dispersion characteristics of equation B are:[5]

The relative error in the phase speed for equation B is less than 4% for kh < 2π/7, equivalent to wave lengths λ longer than 7 times the water depth h, called fairly long waves.[6]

For short waves with k2 h2 > 3 equation B become physically meaningless, because there are no longer real-valued solutions of the phase speed. The original set of two partial differential equations (Boussinesq, 1872, equation 25, see set A above) does not have this shortcoming.

The shallow water equations have a relative error in the phase speed less than 4% for wave lengths λ in excess of 13 times the water depth h.

Some directions, into which the Boussinesq equations have been extended, are:

Besides solitary wave solutions, the Korteweg–de Vries equation also has periodic and exact solutions, called cnoidal waves. These are approximate solutions of the Boussinesq equation. 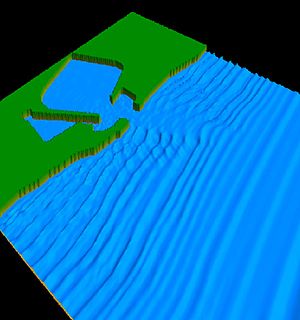 A simulation with a Boussinesq-type wave model of nearshore waves travelling towards a harbour entrance. The simulation is with the BOUSS-2D module of SMS.

For the simulation of wave motion near coasts and harbours, numerical models – both commercial and academic – employing Boussinesq-type equations exist. Some examples are the Boussinesq-type wave modules in MIKE 21 and SMS. Most numerical models employ finite-difference, finite-volume or finite element techniques for the discretization of the model equations. Scientific reviews and intercomparisons of several Boussinesq-type equations, their numerical approximation and performance are e.g. Kirby (2003), Dingemans (1997, Part 2, Chapter 5) and Hamm, Madsen & Peregrine (1993).