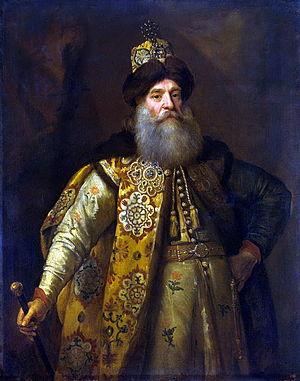 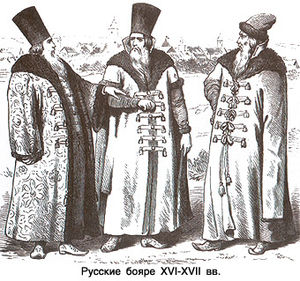 Russian boyars in the 16th–17th centuries

A boyar was a member of the highest rank of the feudal Bulgarian, Moscovian, Kievan Rus'ian, Wallachian, and Moldavian aristocracies, second only to the ruling princes (in Bulgaria, tsars), from the 10th century to the 17th century. The rank has lived on as a surname in Russia, Ukraine and Romania, and also in Finland, where it is spelled Pajari.[1]

The word is likely derived from the plural form of the Bulgarian title boila ("noble"), bolyare, which is attested in Bulgar inscriptions[2][3] and rendered as boilades or boliades in the Greek of Byzantine documents.[4][5] Multiple different derivation theories of the word have been suggested by scholars and linguists, such as it having possible roots from old Turkic: bai ("noble, rich"; cf. "bey") and är ("man, men").[4] Another possible etymology of the term it may come from the Romanian word "boi" (bulls); a rich man is an owner of bulls or "boier".[6] The title entered Old Russian as быля (bylya, attested solely in The Tale of Igor's Campaign).

The oldest Slavic form of boyar—bolyarin, pl. bolyari (Bulgarian: болярин, pl. боляри)—dates from the 10th century, and it is found in Bulgaria, where it may have stemmed from the old Bulgar title boila, which denoted a high aristocratic status among the Bulgars. It was probably transformed through boilar or bilyar to bolyar and bolyarin. In support of this hypothesis is the 10th-century diplomatic protocol of the Byzantine Emperor Constantine VII, where the Bulgarian nobles are called boliades,[5] while the 9th-century Bulgar sources call them boila.[3]

A member of the nobility during the First Bulgarian Empire was called a boila, while in the Second Bulgarian Empire, the corresponding title became bolyar or bolyarin. Bolyar, as well as its predecessor, boila, was a hereditary title. The Bulgarian bolyars were divided into veliki ("great") and malki ("minor").

Presently in Bulgaria, the word bolyari is used as a nickname for the inhabitants of Veliko Tarnovo—once the capital of the Second Bulgarian Empire.

In medieval Serbia, the rank of the Boyars (Serbian: Боjари, Bojari) was equivalent to the rank of the Baron; meaning "free warrior" (or "free man" in general), it was the first rank after the non-free peasants or serfs. The etymology of the term comes from the word battle (Serbian: бој, boj); the Boyars of Serbia were literally "men for the battle" or the warrior class, in contrast to the peasants; they could own land but were obliged to defend it and fight for the king. With the rule of the Ottoman Empire after 1450, the Ottoman as well as the Austro-Hungarian terms exchanged the Serbian one. Today, it is an archaic term representing the aristocracy (Serbian: племство, plemstvo).

Boyars in the lands of Kievan Rus' 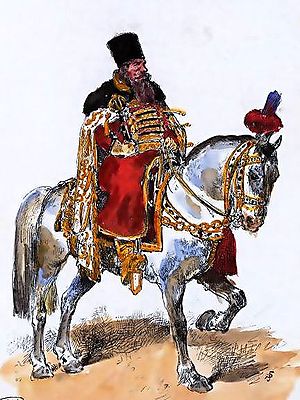 Boyars wielded considerable power through their military support of the Kievan princes. Power and prestige of many of them, however, soon came to depend almost completely on service to the state, family history of service and, to a lesser extent, land ownership. Ukrainian and Russian boyars were visually very similar to knights, but after the Mongol invasion, their cultural links were mostly lost.

The boyars occupied the highest state offices and, through a council (Duma), advised the Grand Duke. They received extensive grants of land and, as members of the Boyars' Duma, were the major legislators of Kievan Rus'.

After the Mongol invasion in the 13th century, the boyars from central and southern parts of Kievan Rus' (modern Belarus and Ukraine) were incorporated into Lithuanian and Polish nobility (szlachta). In the 16th and 17th centuries, many of those Ukrainian boyars who failed to get the status of a nobleman actively participated in the formation of the Cossack army, based in the south of modern Ukraine. 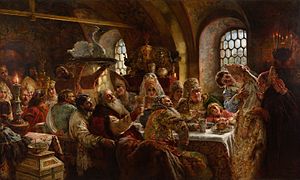 In Moscow in the 14th and 15th centuries, the boyars retained their influence. However, as the knyazes of Muscovy consolidated their power, the influence of the boyars was gradually eroded, particularly under Ivan III and Ivan IV.

Tsar Ivan IV "Ivan the Terrible" severely restricted the boyars' powers during the 16th century. Their ancient right to leave the service of one prince for another was curtailed, as was their right to hold land without giving obligatory service to the tsar.

The Boyar Duma expanded from around 30 people to around 100 in the 17th century and was finally abolished by Tsar Peter the Great in 1711 in his extensive reforms of government and administration.

Boyars in Wallachia and Moldavia 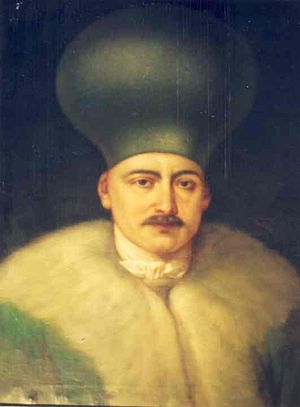 Wallachian Vornic Șerban Grădișteanu, wearing a kalpak, that was an indication of his boyar rank
Main article: Boyars of Wallachia and Moldavia

In the Carpathian regions inhabited by Romanians, the boyar (Romanian: boier) class emerged from the chiefs (named cneaz ("leader") or jude ("judge") in the areas north of the Danube and celnic south of the river) of rural communities in the early Middle Ages, initially elected, who later made their judicial and administrative attributions hereditary and gradually expanded them upon other communities. After the appearance of more advanced political structures in the area, their privileged status had to be confirmed by the central power, which used this prerogative to include in the boyar class individuals that distinguished themselves in the military or civilian functions they performed (by allocating them lands from the princely domains).

The Romanian social hierarchy was composed of boyar, mazil, and răzeş. Being a boyar implied three things: being a land-owner, having serfs, and having a military and/or administrative function. A boyar could have a state function and/or a court function. These functions were called "dregătorie" or "boierie". Only the prince had the power to assign a boierie. Landowners with serfs but no function were categorized as mazil but were still considered to be of noble origin (din os boieresc, which translates literally as "of boyar bones"). Small landowners who possessed a domain without distinction (devălmăşie) or serfs were called "răzeşi". According to some historians, they were descendants of mazil landowners.

Although functions could only be accorded by the prince and were not hereditary, land possession was hereditary. The prince could give land to somebody but could not take it from its possessor except for serious reasons such as treason. Therefore, there were two kinds of boyars: those whose ancestors, as chiefs of the ancient rural communities, had held land before the formation of the feudal states, such that the prince merely confirmed their preexisting status as landowners; and those who acquired their domain from a princely donation or who had inherited it from an ancestor who acquired it through such a donation (cf. the distinction between Uradel and Briefadel in the Holy Roman Empire and in its feudal successor regimes). During the Phanariot régime, there were also boyars who had no land at all, but only a function. This way, the number of boyars could be increased, by selling functions to those who could afford them. 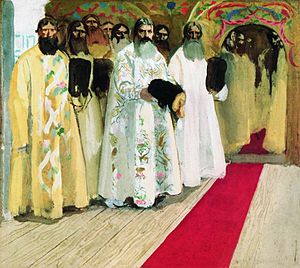 Boyars with gorlatnaya hats in a painting by Andrei Ryabushkin. The higher hats indicated the higher social status.

The close alliance between the boyar condition and the military-administrative functions led to a confusion, aggravated by the Phanariots: these functions began to be considered as noble titles, like in the Occident. In fact, this was not at all the case. Traditionally, the boyars were organized in three states: boyars of the first state, of the second state and of the third state. For example, there was a first or a grand postelnic, a second postelnic, and a third postelnic, each one with his different obligations and rights. The difference of condition was visible even in the vestimentation or physical aspect. Only the boyars of the first state had the right, for example, to grow a beard, the rest being entitled only to a mustache. Within the class of the boyars of the first state, there was the subclass of the "grand boyars". Those were great landowners who also had some very high functions, such as the function of great vornic. Above those grand boyars was only the prince.

Usually a prince was a boyar before his election or appointment as prince, but this was not an absolute condition. Initially, only princely descendants could be elected princes. During the Phanariot epoch, however, any man could be a prince if appointed by the Sultan (and rich enough to buy this appointment from the Grand Vizier). During the Ottoman suzerainty, and especially during the Phanariot régime, the title of Prince became an administrative function within the imperial Ottoman hierarchy, and thus the ultimate form of boyardness. The title of Prince of Wallachia or Moldavia was equivalent in dignity to that of a pasha with two horse-tails.

Norwegian composer Johan Halvorsen wrote a march entitled "Bojarenes inntogsmarsj" ("Entry March of the Boyars"), known in Norway as the signal tune for the radio programme Ønskekonserten. Edvard Grieg arranged it for solo piano. August Strindberg requests that this piece be played during his play The Dance of Death, Part One.