The Brahmanda Purana (The history of the universe) (Sanskrit: ब्रह्माण्ड पुराण, Brahmāṇḍa Purāṇa) is one of the eighteen Mahapuranas, a genre of eighteen Hindu religious texts and has been assigned the eighteenth place in almost all the lists of the Puranas.[1] Brahma in Sanskrit means the creator deity Brahma or by extension "the universe" coming from the root briḥ meaning expansion,[2] and the word anda/andam meaning egg. So, Brahmanda means the "universal egg" or "cosmic germ" signifying the origin from which the universe expands.

The Brahmanda Purana gets its name from the Brahmanda (the cosmic egg) also known as hiranyagarbha. It deals with the origin of the universe as told by Brahma. In the beginning, there was a golden egg, and the prapanca (Universe with its activities) was formed out of it. Portions of Adhyatma Ramayana, references to Radha and Krishna and the incarnation of Parasurama are included in this. According to tradition, this text contains twelve thousand verses.

The Venkateshvara Press, Bombay edition of the text, published in 1906 comprises 14,286 verses. It is divided into two distinct parts.

The first part comprises first two sections of the text, the Pūrvabhāga, the Madhyabhāga and the first part of the third section Uttarabhāga (up to chapter 4). The Pūrvabhāga comprises two pādas (sub-sections): Prakriyā (chapters 1–5) and Anuṣaṅga (chapters 6–38). The Madhyabhāga and the Uttarabhāga comprise only one pāda each, Upodghāta (chapters 1–74) and Upasaṃhāra (chapters 1–4). The names of these four pādas of the text are same as the extant Vayu Purana and its contents are also almost same as the latter text.

The second part, which comprises chapters 5–44 of the third section, the Uttarabhāga is styled as the Lalitopākhyāna (narrative of Lalita). It narrates the worship of the Goddess Lalita according to the Tantric rites.[1] This part is written as a dialogue between Hayagriva and sage Agastya. It describes about Goddess Lalita's emergence out of fire during a sacrifice offered by Indra to Devi, her war with Asura Bhanda and her final triumph.[3]

The major sections of this Purana include:

1. The Puranic Reciter Romaharsana Arrives at Kuruksetra to Attend the Religious Sacrifice Commenced by the Sages. His Recital of the Brahmanda Purana at their Behest. Contents of the Brahmanda Purana. 2. Legend of Naimisa Region; Why Naimisa was so Called; How the Greedy King Pururavas was Killed by the Sages at the Twelve-year Sacrifice at Naimisa When He Attempted to Seize the Golden Sacrificial Altar; How his Son Ayu Ascended the Throne and Conciliated the Sages

3. Evolution of Creation. Emergence of Cosmic Egg out of the Cosmic Waters. 4. Constitution of Cosmic Egg. Egg is Material. Three Stages in the Life of the Egg. Three Material Qualities-sattva, Rajas, Tamas. Disturbance of their Equilibrium as the Cause of World-creation; World-ages; their Description by Time-calculation. 5. Creation. Boar Incarnation of Visnu for Uplifting the Earth; Primary and Secondary Creation; Creation of Gods, Sages and others and their Dissolution

6. Kalpa and Manvantara Ages; their Duration of Time 7. Geographical Division of the Earth; Four Ages, their Durations of Time; Geography of Continents, their Towns and Villages, Flora and Fauna, Castes of People and their Stages of Life 8. Mind-born Sons of Brahma. His Creation of Gods, Sages, Pitrs and Humans 9. Birth of Rudras, Bhrgus and others. 10. Glory of Lord Siva; His Progeny, Birth of his Son Nilalohita. Eight names and Eight forms of Nilalohita 11. Classes of Sages-Bhrgus, etc. 12. Agni-Vamsa; Progeny of Daksa, Daksa Reproaches Siva. Self-immolation of Sati in Yaugic Fire. Daksha and Siva Curse each other. 13. Wheel of time. Rtus as Pitrs

21. Solar system. Movements of Luminaries, Sun, Moon, etc. Division of Time into Days, Months, Half-months, Years and Half-years in the Context of the Movement of Luminaries. A Regular Battle between the Sun and the Raksasas at the Time of Sun-set. Destruction of Raksasas by the Brahmins by Means of Incantation. 22. Stars, Planets and Constellations. Formation of Clouds, Divisions of the Stratosphere. Solar Car. Seven Heptads of the Solar Car. 23. Stars, Planets and Constellations; their Movement, Distance and Magnitude. Position of the Polar Star. 24. Luminaries. Sun and Moon as Planets; Sun as the Source of Light for other Luminaries.

25. How Siva became Blue-necked after He had Swallowed Poison at the Churning of the Milky Ocean. 26. Evolution of the Linga-image of SIVA. 27. Siva Enters Daru Forest in an Unnatural Pose. He is Cursed by the Sages of Daru Forest Who become Perturbed When they Recognize him. They Offer Prayers to Siva and Install his Linga in the Daru Forest. Details of Ash-bath.

28. Pururavas meets Pitrs. He Performs Annual Obsequies on the Amavasya Day Sacred to the Manes. 29. Wheel of Yugas; their Duration of Time; their Transitional Period at Beginning and at the end. Characteristics of Yuga. 30. Inauguration of Sacrificial Cult; Dispute between Indra and Sages; Fall and Degradation of King Vasu When He Denounces Annual Sacrifice as an Act of Violence. 31. Legend of Yugas. Different Castes and Stages of life. 32. Classes of People in Different Ages. 33. Sages and Sacred Formulas.

34. Institute of Vyasa. The Line of His Pupils. Religious Discussion between Yajnavalkya and Sakalya at the Horse-sacrifice of King Janaka. Defeat of Sakalya. 35. Legend of Yajnavalkya and Vaisampa-yana. Yajnavalkya Receives Knowledge of the Vedas from Surya. Legend of Vyasa. Description of Svayambhuva Manu.

1. Creation of Sages; Birth of Seven Sages; Progeny of Bhrgu and Angiras. 2. Progeny of Prajapati. Progeny of Daksa. 3. Progeny of Dharma. Three Attibutes of Svayambhu. Evolution of Gods and Sages. 4. Legend of Jaya. Brahma Curses Jaya. 5. Nrsimhha Incarnation. Destruction of Hiranyakasipu. Progeny of Hiranya Kasipu; Birth of Maruts, Sons of Diti. 6. Male Progeny of Danu and Simhika. 7. Progeny of Kasyapa. Enumeration of Different Dynasties. 8. Dynasties of Sages-Atri and Vasistha.

9. Propitiation of Pitrs. Relative Superiority of the People Entitled to Partake of the Feast Offered to the Manes. 10. Birth of a Daughter to Himavat. Birth of Skanda. Dynasties of Pitrs. Propitiation of Pitrs by Means of Sraddha. 11. Offering Rice-cake to the Manes. Feeding the Brahmins. Establishing fire. 12. In the Context of Sraddha, Five Great Rites (Panca Mahayajnas). Injunctions Regarding Oblations to the Manes and the Fruits Accruing Thereof. 13. Sacred Regions. Description of Hermitages, Mountains, Pilgrimages, Holy Rivers and Streams as Appropriate Places for Sraddha. Preceptor, Meditation, Prayer, Holy Place and their Relative Importance in Respect of Merit. 14. Rites of Purification. Distinguishing Features of the Appropriate and Inappropriate in the Ritual of Sraddha. Eschewing the Sight of the Naked Ascetic During the Performance of Sraddha. 15. Test of a Brahmin for Presiding over the Rite of Sraddha. 16. Praise of Gift Offered During Sraddha. Superiority of the Gift of Food in the Context of Sraddha. 17. Appropriate Day for Performing Sraddha. 18. Evaluation of Merit Accruing from Sraddha in Each of the Twenty-seven Naksatras. 19. Test of a Brahmin for Deserving the Sraddha gift. Merit of Performing Sraddha at Holy Centres, such as Gaya. Hellish Punishment Accruing from the Non-observance of Sraddha. 20. Seven Groups of Pitrs. Rites of their Propitiation.

21. Dialogue between Aurva and Jamadagnya Parasurama. 22. Performance of Penance by Parasurama on the Himalayas for the Gratification of Siva. 23. Test of Parasurama by Siva. Dialogue between Parasurama and Siva in the Guise of a Hunter. 24. Siva is Gratified. He Imparts the Knowledge of Secret Weapons to Parasurama for Slaying the Demons. 25. Parasurama Kills a Tiger in the Himalayan Cave and Protects a Brahmin Boy. 26. Karttavirya of Haihaya Dynasty comes to the Hermitage of Jamadagni and Beholds the Wish-yielding Cow. 27. Haihaya Receives the Hospitality of Jamadagni and Reposes for the Night at the Hermitage. 28. Haihaya is Ready for Departure, at Daybreak But He is Instigated by Candra-gupta, his Minister, to Seize the Wish-yielding Cow (Kamadhcnu) of the Sage. 29. A Quarrel Ensues between Jamadagni and Candragupta Whereupon Haihaya Kills Jamadagni. Kamadheni Disappears in the Firmament. 30. Lamentations of Renuka at the Sight of her Dead Husband. Return of Parasurama from the Forest; his Rage at the Sight of his Dead Father and his Vow to Slay Ksatriyas all over the Earth. Visit of Sage Bhrgu to the Hermitage and his Revival of Jamadagni to Life by Means of Samji-vani Appliance. 31. Parasurama Approaches Brahma and Discusses Strategy for Killing Haihaya. At Brahma's Suggestion He Goes to Lord Siva's Abode. 32. Parasurama Propitiates Siva and Receives the Secret of 'Perfect Missile' by his Favour. 33. Formula Effective of World-conquest. 34. Episode of an Antelope and his Beloved Consort. A Hymn in Praise of Lord Krsna. 35. Parasurama Goes to the Hermitage of Agastya for Hearing the Hymn in Praise of Lord Krsna. 36. Parasurama Hears the Hymn in Praise of Lord Krsna from Agastya. 37-39. The Narrative of Bhargava (Parasurama). 40. Bhargava Kills Karttavirya. 41-43. The Narrative of Bhargava.

44-45. The Episode of Sagara in the Bhargava Narrative. 46. Bhargava Narrative. 47. Narrative of Vasistha in Sagara Episode. 48. Sagara's Vow. 49. Conquest of World by Sagara. 50. Sagara Comes to the Hermitage of Aurva 51. Story of Asamanjas in Sagara Episode. 52. Release of the Sacrificial Horse. 53. Destruction of Sagara. 54-55. Amsumat Ascends the Throne. 56. Descent of the Ganges from the Himalayas. 57. Varuna Visits Bhargava. 58. Dialogue between Bhargava and Varuna. 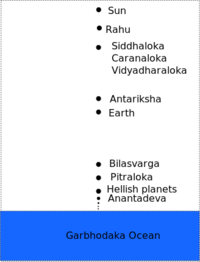