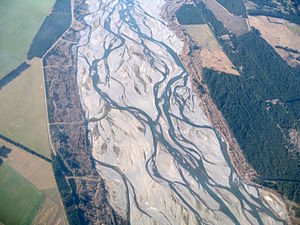 The Waimakariri River is braided over most of its course.

Not to be confused with the River Braid, Ballymena, Northern Ireland.

A braided river is one of a number of channel types and has a channel that consists of a network of small channels separated by small and often temporary islands called braid bars or, in British usage, aits or eyots. Braided streams occur in rivers with high slope and/or large sediment load.[1] Braided channels are also typical of environments that dramatically decrease channel depth, and consequently channel velocity, such as river deltas, alluvial fans and peneplains.

File:White River 5965.JPG
The White River in the U.S. state of Washington transports a large sediment load from the Emmons Glacier of Mount Rainier, a young, rapidly eroding volcano.

Braided rivers, as distinct from meandering rivers, occur when a threshold level of sediment load or slope is reached. Geologically speaking, an increase in sediment load will over time increase in the slope of the river, so these two conditions can be considered synonymous; and, consequently, a variation of slope can model a variation in sediment load. A threshold slope was experimentally determined to be 0.016 (ft/ft) for a 0.15 cu ft/s (0.0042 m3/s) stream with poorly sorted coarse sand.[1] Any slope over this threshold created a braided stream, while any slope under the threshold created a meandering stream or— for very low slopes—a straight channel. So the main controlling factor on river development is the amount of sediment that the river carries; once a given system crosses a threshold value for sediment load, it will convert from a meandering system to a braided system. Also important to channel development is the proportion of suspended load sediment to bed load. An increase in suspended sediment allowed for the deposition of fine erosion-resistant material on the inside of a curve, which accentuated the curve and in some instances caused a river to shift from a braided to a meandering profile.[1] The channels and braid bars are usually highly mobile, with the river layout often changing significantly during flood events.[2] Channels move sideways via differential velocity: On the outside of a curve, deeper, swift water picks up sediment (usually gravel or larger stones), which is re-deposited in slow-moving water on the inside of a bend.

The braided channels may flow within an area defined by relatively stable banks or may occupy an entire valley floor. The Rakaia River in Canterbury, New Zealand has cut a channel 100 metres wide into the surrounding plains; this river transports sediment to a lagoon located on the river-coast interface.

However, the critical factor that determines whether a stream will meander or braid is bank erodibility. A stream with cohesive banks that are resistant to erosion will form narrow, deep, meandering channels, whereas a stream with highly erodible banks will form wide, shallow channels, inhibiting helical flow and resulting in the formation of braided channels.[5]