From Infogalactic: the planetary knowledge core
Jump to: navigation, search
This article is about the vehicle component. For other uses, see Brake (disambiguation). 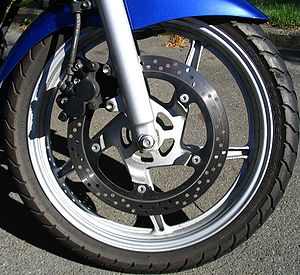 Disc brake on a motorcycle

A brake is a mechanical device that inhibits motion, slowing or stopping a moving object or preventing its motion.

Most brakes commonly use friction between two surfaces pressed together to convert the kinetic energy of the moving object into heat, though other methods of energy conversion may be employed. For example, regenerative braking converts much of the energy to electrical energy, which may be stored for later use. Other methods convert kinetic energy into potential energy in such stored forms as pressurized air or pressurized oil. Eddy current brakes use magnetic fields to convert kinetic energy into electric current in the brake disc, fin, or rail, which is converted into heat. Still other braking methods even transform kinetic energy into different forms, for example by transferring the energy to a rotating flywheel.

), an object moving at 10 m/s has 100 times as much energy as one of the same mass moving at 1 m/s, and consequently the theoretical braking distance, when braking at the traction limit, is 100 times as long. In practice, fast vehicles usually have significant air drag, and energy lost to air drag rises quickly with speed.

Almost all wheeled vehicles have a brake of some sort. Even baggage carts and shopping carts may have them for use on a moving ramp. Most fixed-wing aircraft are fitted with wheel brakes on the undercarriage. Some aircraft also feature air brakes designed to reduce their speed in flight. Notable examples include gliders and some World War II-era aircraft, primarily some fighter aircraft and many dive bombers of the era. These allow the aircraft to maintain a safe speed in a steep descent. The Saab B 17 dive bomber and Vought F4U Corsair fighter used the deployed undercarriage as an air brake.

Friction brakes on automobiles store braking heat in the drum brake or disc brake while braking then conduct it to the air gradually. When traveling downhill some vehicles can use their engines to brake. 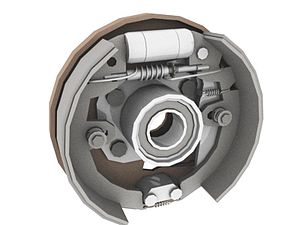 Rendering of a drum brake 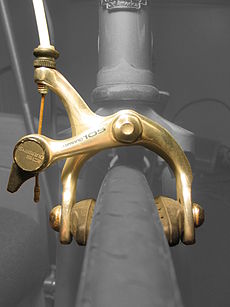 Brakes may be broadly described as using friction, pumping, or electromagnetics. One brake may use several principles: for example, a pump may pass fluid through an orifice to create friction:

Brakes are often described according to several characteristics including: 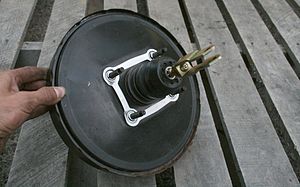 Brake booster from a Geo Storm.

Most modern vehicles use a vacuum assisted brake system that greatly increases the force applied to the vehicle's brakes by its operator.[1] This additional force is supplied by the manifold vacuum generated by air flow being obstructed by the throttle on a running engine. This force is greatly reduced when the engine is running at fully open throttle, as the difference between ambient air pressure and manifold (absolute) air pressure is reduced, and therefore available vacuum is diminished. However, brakes are rarely applied at full throttle; the driver takes the right foot off the gas pedal and moves it to the brake pedal - unless left-foot braking is used.

Because of low vacuum at high RPM, reports of unintended acceleration are often accompanied by complaints of failed or weakened brakes, as the high-revving engine, having an open throttle, is unable to provide enough vacuum to power the brake booster. This problem is exacerbated in vehicles equipped with automatic transmissions as the vehicle will automatically downshift upon application of the brakes, thereby increasing the torque delivered to the driven-wheels in contact with the road surface. 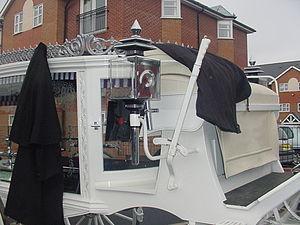 Although ideally a brake would convert all the kinetic energy into heat, in practice a significant amount may be converted into acoustic energy instead, contributing to noise pollution.

For road vehicles, the noise produced varies significantly with tire construction, road surface, and the magnitude of the deceleration.[2] Noise can be caused by different things. These are signs that there may be issues with brakes wearing out over time.

A significant amount of energy is always lost while braking, even with regenerative braking which is not perfectly efficient. Therefore, a good metric of efficient energy use while driving is to note how much one is braking. If the majority of deceleration is from unavoidable friction instead of braking, one is squeezing out most of the service from the vehicle. Minimizing brake use is one of the fuel economy-maximizing behaviors.

While energy is always lost during a brake event, a secondary factor that influences efficiency is "off-brake drag", or drag that occurs when the brake is not intentionally actuated. After a braking event, hydraulic pressure drops in the system, allowing the brake caliper pistons to retract. However, this retraction must accommodate all compliance in the system (under pressure) as well as thermal distortion of components like the brake disc or the brake system will drag until the contact with the disc, for example, knocks the pads and pistons back from the rubbing surface. During this time, there can be significant brake drag. This brake drag can lead to significant parasitic power loss, thus impact fuel economy and vehicle performance.