The Brazilian Space Agency (Portuguese: Agência Espacial Brasileira; AEB) is the civilian authority in Brazil responsible for the country's burgeoning space program. It operates a spaceport at Alcântara and a rocket launch site at Barreira do Inferno. The agency has given Brazil a role in space in South America and technically made Brazil a partner for cooperation in the International Space Station.[3]

The Brazilian Space Agency is the heir to Brazil's space program. Previously, the program had been under the control of the Brazilian military; the program was transferred into civilian control on 10 February 1994.

It suffered a major setback in 2003, when a rocket explosion killed 21 technicians. Brazil successfully launched its first rocket into space on 23 October 2004 from the Alcântara Launch Center; it was a VSB-30 launched on a sub-orbital mission. Several other successful launches have followed.[4][5][6]

On March 30, 2006, AEB astronaut Marcos Pontes became the first Brazilian and the first native Portuguese-speaking person to go into space, where he stayed on the International Space Station for a week. During his trip, Pontes carried out eight experiments selected by the Brazilian Space Agency. He landed in Kazakhstan on April 8, 2006, with the crew of Expedition 12.[7]

The Brazilian Space Agency has pursued a policy of joint technological development with more advanced space programs. Initially it relied heavily on the United States, but after meeting difficulties from them on technological transfers, Brazil has branched out, working with other nations, including China, India, Russia and Ukraine. 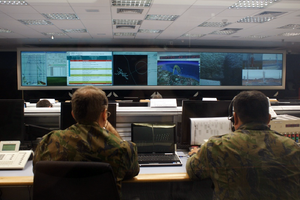 The Alcântara Launch Center (Portuguese: Centro de Lançamento de Alcântara; CLA) is the main launch site and operational center of the Brazilian Space Agency.[8] It is located in the peninsula of Alcântara, in the state of Maranhão.[9] This region presents some excellent requirements, such as low population density, excellent security conditions and easiness of aerial and maritime access.[9] The most important factor is its closeness to the Equator - Alcântara is the closest launching base to the Equator.[8] This gives the launch site a significant advantage in launching geosynchronous satellites.[8]

The Barreira do Inferno Launch Center (Portuguese: Centro de Lançamento da Barreira do Inferno; CLBI) is a rocket launch base of the Brazilian Space Agency.[10] It is located in the city of Parnamirim, in the state of Rio Grande do Norte. It is primarily used to launch sounding rockets and to support the Alcântara Launch Center.[11] 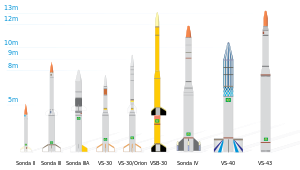 The Brazilian Space Agency has operated a series of sounding rockets.

The VLM "Veiculo Lançador de Microsatelites" (Microsatelite Launch Vehicle) based on the S50 rocket engine is being studied, with the objective of orbiting satellites up to 150 kg in circular orbits ranging from 250 to 700 km. It will be a three-stage rocket, expected to launch the SHEFEX III mission by the German Aerospace Center (DLR) in 2016.[12][13][14]

The VLS - Satellite Launch Vehicle (Portuguese: Veículo Lançador de Satélites) is the Brazilian Space Agency's main satellite launch vehicle.[15] It is a four-stage rocket composed of a core and four strap-on motors.[16] The vehicle's first stage has four solid fuel motors derived from the Sonda sounding rockets.[16] It is intended to deploy 100 to 380 kg satellites into 200 to 1200 km orbit, or to deploy 75 to 275 kg payloads into 200 to 1000 km polar orbit.[16] The first 3 prototypes for the vehicle failed to launch, with the 3rd exploding on the launch pad in 2003 resulting in the deaths of 21 AEB personnel.

The Brazilian Space Agency was developing a new family of launch vehicles in cooperation with the Russian Federal Space Agency.[19][20][21] The five rockets of the Southern Cross family will be based on Russia's Angara vehicle and liquid-propellant engines.[19]

The first stage of the VLS Gama, Delta and Epsilon rockets was to be powered by a unit based on the RD-191 engine.[19] The second stage, which will be the same for all the Southern Cross rockets, will be driven by an engine based on the Molniya rocket.[19] The third stage will be a solid-propellant booster based on an upgraded version of the VLS-1.[19] The program was named "Southern Cross" in reference to the Crux constellation, present on the flag of Brazil and composed of five stars.[22] Hence the names of the future launch vehicles:[22]

The first rocket to be developed. As a direct modification of the VLS-1 of the original project, replacing the fourth and fifth stages by a single liquid fuel engine. It can place payloads in the range 200–400 kg in orbits up to 750 km.

Consisting of three stages without auxiliary thrusters. The first stage is a solid fuel propellant 40 tons, the second will have a 30 tons of thrust engine and the latter will be 7.5 tons of thrust, with the same mixture "Kerolox". It can place payloads up to 800 kg in orbits up to 800 km.

The VLS Gama launcher is part of the light-weight class, but using the near-equatorial position of the Alcântara Launch Center, it can place almost 1 ton of payload into orbit up to 800 km.

The VLS Delta launcher is a medium-weight rocket and differs from the Gamma by having four solid-propellant boosters attached to the first stage.[19] Its payload deliverable to a geostationary orbit is 2 tons.[19]

The VLS Epsilon launcher is a heavy-weight rocket with three identical units attached to the first stage.[19] It can place a 4 tons spacecraft in geostationary orbit, if it is launched from Alcântara.[19]

The Brazilian government was planning to allocate $1 billion dollars for the project over six years.[19] It has already set aside $650 million for the construction of five launch pads able to handle up to 12 launches per year.[19] The program is scheduled to be completed by 2022.[22] However, the program was cancelled by Brazilian President Dilma Rouseff. Instead, Brazil will focus on a series of smaller launch vehicles that appear to rely more on home-grown technology. The country also has forged a cooperative arrangement with Germany to develop a dedicated micro-satellite launch vehicle. Meanwhile, Brazil is continuing work on launching Ukraine’s Cyclone-4 rocket from the Alcantara Launch Center in 2014. - See more at: http://www.parabolicarc.com/2013/02/10/brazil-scales-back-launch-vehicle-plans/#sthash.4U6cTyC6.dpuf

A number of different engines[23] were developed for usage on the several launch vehicles:

The Brazilian Space Agency has several active imagery intelligence satellites in orbit, including reconnaissance and earth observation satellites. Several others are currently in development.

Marcos Pontes, a lieutenant colonel in the Brazilian Air Force, is an astronaut of the Brazilian Space Agency.[42] Pontes was the first Brazilian astronaut,[43] having launched with the Expedition 13 crew from the Baikonur Cosmodrome in Kazakhstan on March 29, 2006 aboard a Soyuz-TMA spacecraft. Pontes docked with the International Space Station (ISS) on March 31, 2006, where he lived and worked for 9 days.[43] Pontes returned to Earth with the Expedition 12 crew, landing in Kazakhstan on April 8, 2006.[43] Currently, Pontes continues with his technical duties for the International Space Station program in the development and fabrication of the Brazilian parts for the ISS.[43] He is on stand-by for training for future Brazilian space flights.[43]

The Brazilian Space Agency is a bilateral partner of NASA in the International Space Station.[44] The agreement for the design, development, operation and use of Brazilian developed flight equipment and payloads for the Space Station was signed in 1997.[44] It includes the development of six items, among which are a Window Observational Research Facility and a Technology Experiment Facility.[42] In return, NASA will provide Brazil with access to its ISS facilities on-orbit, as well as a flight opportunity for one Brazilian astronaut during the course of the ISS program.[44]

On October 21, 2003, the Brazilian Space Agency and the State Space Agency of Ukraine established a cooperation agreement creating a joint venture space enterprise called Alcântara Cyclone Space.[45] The new company will focus on launching satellites from the Alcântara Launch Center using the Tsyklon-4 rocket.[46] The company will invest $160 million dollars in infrastructure for the new launch pad that will be constructed at the Alcântara Launch Center.

In March 2009, the Brazilian Government increased its financial capital by US$ 50 million.[47]

On November 8, 2010, National Institute for Space Research (INPE) and Japan Aerospace Exploration Agency (JAXA) signed a Letter of Intent regarding the Reducing Emissions from Deforestation and Forest Degradation in Developing Countries (REDD+) program.[48] Examples of the cooperation include the monitoring of illegal logging in the Amazon rain forest utilizing data from JAXA's ALOS satellite. Both Brazil and Japan are members of the Global Precipitation Measurement project.[49]