Brenda Milner, CC GOQ FRS FRSC (born July 15, 1918) is a Canadian neuropsychologist who has contributed extensively to the research literature on various topics in the field of clinical neuropsychology.[1] Milner is a professor in the Department of Neurology and Neurosurgery at McGill University and a professor of Psychology at the Montreal Neurological Institute.[2] She currently holds more than 20 honorary degrees and continues to work in her nineties.[3] Her current work explores the interaction between the brain’s left and right hemispheres.[3] Milner has been called the founder of neuropsychology,[4] and has proven to be an essential key in its development. She received the Kavli Prize in Neuroscience “for the discovery of specialized brain networks for memory and cognition", together with John O’Keefe, and Marcus E. Raichle, in 2014.

Brenda Langford (later Milner by marriage) was born on July 15, 1918, in Manchester, England.[5] Milner’s father was a musical critic, journalist, and teacher and her mother was a singing student.[6] Though she was a daughter to two musically talented parents she had no interest in music. Thus she was tutored by her father in mathematics and the arts.”[6] She attended Withington Girls' School, which led her to attend Newnham College, Cambridge, to read mathematics; however, after completing the first part of the Mathematical Tripos in 1937 Milner changed field.[5] In 1939, Milner graduated with a BA degree in experimental psychology, which at that time was classified as the moral sciences.[5]

Her supervisor at Cambridge was Oliver Zangwill and to him she owes her first interest in human brain function.[5] Oliver Zangwill was a Cambridge graduate with First Class Honors with Special Distinction.[7] “He immediately began postgraduate research with Frederic Bartlett, who was by then Cambridge’s first Professor of Experimental Psychology.”[7] Zangwill’s career with Bartlett won him an honorable reputation. “Working with Bartlett was of significance for Zangwill’s career as Bartlett had an extraordinarily powerful effect on the shape of British academic psychology.”[7]

Milner was awarded a Sarah Smithson Research Studentship by Newnham College after her graduation near the time of World War II, which allowed her to attended Newnham for the following two years.[5] As a result of World War II, the work of the Cambridge Psychological Laboratory, under Bartlett’s leadership, was diverted almost overnight to applied research in the selection of aircrew.[5] Milner's position in this was to devise perceptual tasks for future use in selecting aircrew. More specifically, she was on a team interested in distinguishing fighter pilots from bomber pilots using aptitude tests.[4][5] “Later in the war, from 1941 to 1944, she worked in Malvern as an Experimental Officer for the Ministry of Supply, investigating different methods of display and control to be used by radar operators.”[5]

Prior to Milner’s master’s degree she met her husband, Peter Milner. He was an electrical engineer who had also been recruited for the war effort.[6] In 1944 they married and left England for Canada after Peter had been invited to work with physicists on atomic research.[5][6] Their move to Canada brought Milner to new opportunities for her and neuropsychology.

In Montreal, Milner became a PhD candidate in psychophysiology at McGill University, under the direction of the distinguished Dr. Donald Olding Hebb.[8] In 1950, Hebb gave Milner an opportunity to study with Dr. Wilder Penfield at the Montreal Neurological Institute.[5] Alongside Penfield, she studied the behavior of epileptic patients treated with focal ablation of brain tissue.[8] In 1952, Milner earned her PhD in experimental psychology.[6]

Milner published an article in the McGill University Psychological Bulletin in 1954 entitled “Intellectual Function of the Temporal Lobes”; within this publication she brought to light that temporal lobe damage can cause emotional and intellectual changes in humans and lower primates.[9] In this work, Milner reviewed animal studies of neural function and compared it to human neuroscience work. Her publication discouraged many neurosurgeons from completing surgeries on human beings that could negatively impact their lives. “Milner’s early work on the temporal lobes was influenced by the results of ablation work with lower primates, and particularly by Mishkin and Pribram’s discovery of the role of the inferotemporal neocortex in visual discrimination learning.” [8]

Milner was a pioneer in the field of neuropsychology and in the study of memory and other cognitive functions in humankind. She studied the effects of damage to the medial temporal lobe on memory and systematically described the deficits in the most famous patient in cognitive neuroscience, Henry Molaison, formerly known as patient H.M. Though he was not able to remember new events he was able to learn new motor skills.[3] Milner was invited to Hartford to study H.M., “who had undergone a bilateral temporal lobectomy that included removal of major portions of the hippocampus.”[10]

In the early stages of her work with H.M., Milner wanted to completely understand his memory impairments. Dr. Milner showed that the medial temporal lobe amnestic syndrome is characterized by an inability to acquire new memories and an inability to recall established memories from a few years immediately before damage, while memories from the more remote past and other cognitive abilities, including language, perception and reasoning were intact.[11] For example, Milner spent three days with H.M. as he learned a new perceptual-motor task in order to determine what type of learning and memory were intact in him. This task involved reproducing the drawing of a star by looking at it in a mirror.[10] His performance improved over those three days. However, he retained absolutely no memory of any events that took place during those three days.[10] This led Milner to speculate that there are different types of learning and memory, each dependent on a separate system of the brain .[12] She was able to demonstrate two different memory systems- episodic memory and procedural memory.[3]

Milner discovered from H.M. and other case studies that "bilateral medial temporal-lobe resection in man results in a persistent impairment of recent memory whenever the removal is carried far enough posteriorly to damage portions of the anterior hippocampus and hippocampal gyrus." [13] She showed that in patients with this syndrome the ability to learn certain motor skills remained normal.[13] This finding introduced the concept of multiple memory systems within the brain and stimulated an enormous body of research. Milner stated in an interview with the McGill Journal of Medicine, “To see that HM had learned the task perfectly but with absolutely no awareness that he had done it before was an amazing dissociation. If you want to know what was an exciting moment of my life, that was one."[12]

She has made major contributions to the understanding of the role of the frontal lobes in memory processing, in the area of organizing information. "Dr. Milner's seminal research has provided many landmark discoveries in the study of human memory and the brain's temporal lobes, which play a key role in emotional responses, hearing, memory and speech." [13]

She demonstrated the critical role of the dorsolateral frontal cortex for the temporal organization of memory and her work showed that there is partial separability of the neural circuits subserving recognition memory from those mediating memory for temporal order. She described the inflexibility in problem solving that is now widely recognized as a common consequence of frontal-lobe injury. These refinements in the understanding of memory and exposition of the relevant brain regions revealed the diffuse nature of complex cognitive functions in the brain.

Milner helped describe the lateralization of function in the human brain and has shown how the representation of language in the cerebral hemispheres can vary in left-handed, right-handed and ambidextrous individuals (see handedness). These studies of the relationship between hand preference and speech lateralization led to an understanding of the effects of early unilateral brain lesions on the pattern of cerebral organization at maturity. Her studies were among the first to demonstrate convincingly that damage to the brain can lead to dramatic functional reorganization. 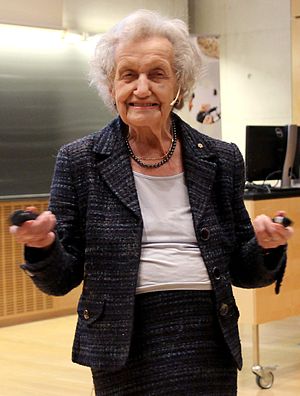 Currently in her nineties, Milner is still teaching and researching. She is the Dorothy J. Killam Professor at the Montreal Neurological Institute, and a professor in the Department of Neurology and Neurosurgery at McGill University.[3] One of Milner's current collaborators is Denise Klein, an assistant professor in the Neurology/Cognitive Neuroscience unit at McGill.[6] Their research on bilingualism entails investigating the difference in neural pathways used to acquire new and native languages.[6]

Recently, she expanded her research to the study of brain activity in normal subjects using functional magnetic resonance imaging (fMRI) and positron emission tomography (PET).[3] These studies focus on the identification of brain regions associated with spatial memory and language, including the neural substrates of unilingual and bilingual speech processing.[3]

Early on, Milner was awarded a Sarah Smithson Research Studentship by Newnham College, Cambridge after her graduation, which allowed her to attended Newnham.[5] In 1984 Milner was made an Officer of the Order of Canada and was promoted to Companion in 2004. She was also awarded the National Academy of Sciences Award in the Neurosciences in 2004 for her seminal investigations of the role of the temporal lobes and other brain regions in learning, memory, and language.[14] In 1985, she was made an Officer of the National Order of Quebec and was promoted to Grand Officer in 2009.[15] She was elected a Foreign Honorary Member of the American Academy of Arts and Sciences in 2007.[16] She was awarded the Balzan Prize for her contributions to Cognitive Neurosciences in a ceremony held in the Swiss Parliament in December 2009.[2]

Milner was awarded the Kavli Prize in Neuroscience on May 29, 2014.