The Brezhnev Doctrine was a Soviet foreign policy, first and most clearly outlined by S. Kovalev in a September 26, 1968, Pravda article, entitled Sovereignty and the International Obligations of Socialist Countries. Leonid Brezhnev reiterated it in a speech at the Fifth Congress of the Polish United Workers' Party on November 13, 1968, which stated: 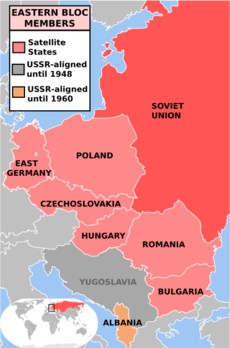 When forces that are hostile to socialism try to turn the development of some socialist country towards capitalism, it becomes not only a problem of the country concerned, but a common problem and concern of all socialist countries.

This doctrine was announced to retroactively justify the invasion of Czechoslovakia in August 1968 that ended the Prague Spring, along with earlier Soviet military interventions, such as the invasion of Hungary in 1956. These interventions were meant to put an end to liberalization efforts and uprisings that had the potential to compromise Soviet hegemony inside the Eastern Bloc, which was considered by the Soviets to be an essential defensive and strategic buffer in case hostilities with NATO were to break out.

In practice, the policy meant that only limited independence of the satellite states' communist parties was allowed and that no country would be allowed to compromise the cohesiveness of the Eastern Bloc in any way. That is, no country could leave the Warsaw Pact or disturb a ruling communist party's monopoly on power. Implicit in this doctrine was that the leadership of the Soviet Union reserved, for itself, the right to define "socialism" and "capitalism". Following the announcement of the Brezhnev Doctrine, numerous treaties were signed between the Soviet Union and its satellite states to reassert these points and to further ensure inter-state cooperation. The principles of the doctrine were so broad that the Soviets even used it to justify their military intervention in the non-Warsaw Pact nation of Afghanistan in 1979. The Brezhnev Doctrine stayed in effect until it was finally ended with the Soviet reaction to the Polish crisis of 1980–81,[1] and the later unwillingness of Mikhail Gorbachev to use military force when Poland held free elections in 1989 and Solidarnosc defeated the Polish United Workers' Party.[2] It was superseded by the facetiously named Sinatra Doctrine in 1989, alluding to the Frank Sinatra song "My Way".[3]