Brill (Euronext: BRILL) (known as E. J. Brill, Koninklijke Brill, Brill Academic Publishers) is a Dutch international academic publisher founded in 1683 in Leiden, Netherlands. With offices in Leiden and Boston, Brill today publishes more than 200 journals[1] and around 700 new books and reference works each year. In addition, Brill is a provider of primary source materials online and on microform for researchers in the humanities and social sciences. 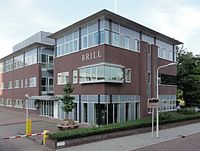 The roots of Brill go back to May 17, 1683, when a certain Jordaan Luchtmans was registered as a bookseller by the Leiden booksellers' guild.[2] As was customary at the time, Luchtmans combined his bookselling business with publishing activities. These were primarily in the fields of biblical studies, theology, Oriental languages, and ethnography. Luchtmans established close ties with the University of Leiden, which was then one of the major centers of study in these areas. 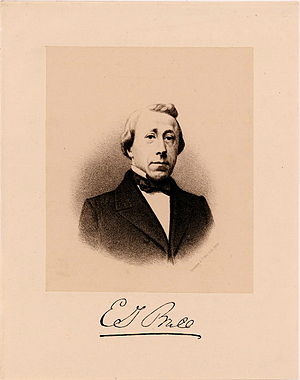 In 1848, the business passed from the Luchtmans family to that of E. J. (Evert Jan) Brill, a former employee. In order to cover the financial obligations that he inherited, E. J. Brill decided to liquidate the entire Luchtmans book stock in a series of auctions that took place between 1848 and 1850.[3] Brill continued to publish in the traditional core areas of the company, with occasional excursions into other fields. Thus, in 1882, the firm brought out a two-volume Leerboek der Stoomwerktuigkunde ("Handbook of Steam Engineering"). More programmatically, however, in 1855 Het Gebed des Heeren in veertien talen ("The Lord's Prayer in Fourteen Languages") was meant to publicize Brill's ability to typeset non-Latin alphabets, such as Hebrew, Aramaic, Samaritan, Sanskrit, Coptic, Syriac, Arabic, among several others.[4]

In 1896, Brill became a public limited company, when E. J. Brill's successors, A. P. M. van Oordt and Frans de Stoppelaar, both businessmen with some academic background and interest, died. A series of directors followed, until in 1934, Theunis Folkers took over the reins. His directorship marked a period of unprecedented growth in the history of the company, due to a large extent to Folkers' cooperation with the German occupying forces during World War II. For the Germans, Brill printed foreign-language textbooks so that they could manage the territories they occupied, but also military manuals, such as "a manual which trained German officers to distinguish the insignias of the Russian army."[5] In 1934, the company had a turnover of 132,000 guilders; by 1943, this had increased to 579,000 guilders.[6]

After the war, the Dutch denazification committee determined the presence of "enemy money" in Brill's accounts. Folkerts was arrested in September, 1946, and deprived of the right to hold a managerial post.[7] The company itself, however, escaped the aftermath of the war relatively unscathed; after some negotiation its fines were fixed at 57,000 guilders.[8]

Brill's path in the post-war years was again marked by ups and downs, though the company remained faithful in its commitment to scholarly publishing. The late 1980s brought an acute crisis due to over-expansion as well as general changes in the publishing industry. Thus, in 1987–88 the company underwent a major restructuring, in the course of which it closed all its foreign offices, including the oldest ones in London and Cologne. Brill, moreover, sold its printing business, which amounted "to amputat[ing] its own limb."[9] However, the reorganization managed to save the company, which has since then undergone an expansion that as recently as 1990 had been inconceivable. Brill now publishes around 600 books and 100 journals each year, with a turnover of 26 million Euro.[10]

Brill publishes several open access journals[11] and is one of thirteen publishers to participate in the Knowledge Unlatched pilot; a global library consortium approach to funding open access books.[12]

In 2013, Brill created the IFLA/Brill Open Access Award for initiatives in the area of open access monograph publishing together with the International Federation of Library Associations and Institutions.[13] Brill is a member of the Open Access Scholarly Publishers Association.