The Bristol F.2 Fighter was a British two-seat biplane fighter and reconnaissance aircraft of the First World War flown by the Royal Flying Corps. It is often simply called the Bristol Fighter or popularly the "Brisfit" or "Biff". Despite being a two-seater, the F.2B proved to be an agile aircraft that was able to hold its own against opposing single-seat fighters. Having overcome a disastrous start to its career, the F.2B's solid design ensured that it remained in military service into the 1930s, and surplus aircraft were popular in civil aviation.

The Bristol fighter's basic design stemmed from design studies by Frank Barnwell in March 1916 for an aircraft intended, like the R.E.8 and the F.K.8, as possible replacements for the B.E.2c – the Type 9 R.2A with the 160 hp Beardmore engine and the R.2B, powered by the 150 hp Hispano Suiza.[2] Neither type was built, as the new 190 hp (142 kW) Rolls-Royce Falcon inline engine became available, and Barnwell designed a new aircraft around the Rolls-Royce engine. This, the Type 12 F.2A was a more compact design, intended from the outset as a replacement for the F.E.2d and Sopwith 1½ Strutter two-seat fighters: it first flew on 9 September 1916.[3] The F.2A was armed in what had by then become the standard manner for a British two-seater: one synchronised fixed, forward-firing .303 in (7.7 mm) Vickers machine gun, and one flexible .303 in (7.7 mm) Lewis Gun mounted on a Scarff ring in the observer's rear cockpit. This remained the standard armament. 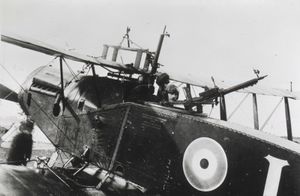 F.2Bs often carried a second Lewis gun on the rear cockpit mounting, although observers found the weight of the twin Lewis gun mounting difficult to handle in the high altitudes at which combat increasingly took place in the last year of the war. A number of attempts were made to add forward firing Lewis guns on a Foster mounting or similar on the upper wing - either instead of, or in addition to the Vickers gun. Unfortunately this caused interference with the pilot's compass, which was mounted on the trailing edge of the upper wing. Some F.2Bs were fitted with a Lewis gun offset to starboard to minimise this effect.[4]

The Bristol M.R.1 is often described as an "all-metal version of the F.2b". In fact it was a totally new design – although it shared the characteristic of having the fuselage positioned between the upper and lower wing. Two prototypes were built, the first flying on 23 October 1917, but the M.R.1 never entered mass production.

Rolls-Royce aero engines of all types were in chronic short supply in this period, and the Falcon was no exception. Plans to make the Bristol Fighter the standard British two-seater, replacing the R.E.8 and F.K.8, stalled against this barrier; there simply were not enough Falcons available. Efforts to find an available powerplant that was sufficiently powerful and reliable ultimately failed.

The Type 15 was fitted with a 200 hp (150 kW) Sunbeam Arab piston engine. This motor suffered from chronic vibration and the "Arab Bristol" was never a viable combination, in spite of prolonged development. A few Arab-engined Bristols were at the front very late in the war – but most British reconnaissance squadrons had to soldier on with the R.E.8 and F.K.8 until the end of hostilities. 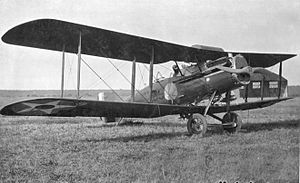 The United States Army Engineering Division had plans to develop and build an American version of the Bristol Fighter. However, efforts to start production in the United States floundered due to the mistaken decision to power the type with the 400 hp (298 kW) Liberty L-12 engine. The Liberty was a totally unsuitable engine for the Bristol, as it was far too heavy and bulky, the resulting aircraft being nose heavy, and only 27 of the planned 2,000 were built.[5] Efforts to change the powerplant of American Bristol Fighters to the more suitable Liberty 8 or the 300 hp (224 kW) Wright-Hisso came up against political as well as technical problems. Only one each of the Hispano-engined Engineering Division USB-1A and the Liberty L-8-engined Engineering Division USB-1B were built.[5]

When fitted with a new plywood monocoque fuselage designed by the Engineering Division of the US Army Air Service and powered by a Wright-Hispano engine, the US-built Bristol Fighter was known as the XB-1A. Three prototypes were built by the Engineering division at McCook Field, with a further 44 aircraft built by the Dayton-Wright Company.[6]

Postwar developments of the F.2B included the Type 14 F.2B Mk II, a two-seat army co-operation biplane, fitted with desert equipment and a tropical cooling system, which first flew in December 1919. 435 were built. The Type 96 Fighter Mk III and Type 96A Fighter Mk VI were structurally strengthened aircraft, of which 50 were built in 1926–1927.

Surplus F.2Bs were modified for civilian use. The Bristol Tourer was an F.2B fitted with a Siddeley Puma engine in place of the Falcon and with the cockpits enclosed by canopies. The Tourer had a maximum speed of 128 mph (206 km/h). 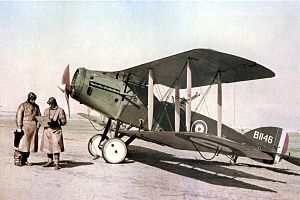 The arrival of the F.2A on the Western Front was deliberately timed for April 1917, as the British launched the Battle of Arras. In the event, this month became known as Bloody April: casualties were high throughout the RFC, and initially the Bristol fighter was no exception. At this period, contemporary two-seater aircraft were far less nimble than fighter aircraft, and many types lacked the structural strength to carry out the aggressive manoeuvres needed for dogfighting. The first "Brisfit" aircrews were accustomed to the standard doctrine of maintaining formation and using the crossfire of the observers' guns to counter enemy fighter aircraft.

The very first F.2A patrol of six aircraft from No. 48 Squadron RFC, led by Victoria Cross recipient William Leefe Robinson, ran into five Albatros D.IIIs from Jasta 11 led by Manfred von Richthofen. Four out of the six F.2As were shot down – including Robinson's; he was captured – and a fifth was badly damaged.[7]

Pilots soon realised that the Bristol Fighter was a strong and agile aircraft, capable of manoeuvring with single seat fighters. If its fixed forward firing gun was used as the primary weapon, the observer could use his flexible, rear mounted gun to provide protection for the aircraft's tail. Flown in this manner, the Bristol Fighter proved a formidable opponent for German fighters.

In September and October 1917, orders for 1,600 F.2Bs were placed, and by the end of the First World War the Royal Air Force had 1,583 F.2Bs in squadron service. A total of 5,329 aircraft were eventually built, mostly by Bristol but also by Standard Motors, Armstrong Whitworth and even the Cunard Steamship Company. After the war, F.2Bs continued to operate in army cooperation and light bombing roles throughout the British Empire, in particular the Middle East, India and China. The F.2B also served with the New Zealand Permanent Air Force and RAAF as well as with the air forces of Belgium, Canada, Ireland, Greece, Mexico, Norway, Peru, Spain and Sweden. It was not until 1932 that the F.2B was finally withdrawn from RAF service, the last "Brisfit" unit being No. 20 Squadron RAF stationed in India. The type lasted a further three years in New Zealand.

In 1920 Poland bought 107 Bristol Fighters, thus becoming the second largest user of this type (105 with Hispano-Suiza 300 hp/220 kW engines, two with RR Falcon III).[8] It was most numerous Polish aircraft type at that time. Forty were used during the Polish-Soviet war from July 1920, among others in Battle of Warsaw, for reconnaissance and close air support. The rest became operational only after hostilities. Two were shot down by ground fire, one was captured by the Soviets and several were lost in crashes. The survivors served in Poland for reconnaissance and training until 1932.[8]

Airworthy- There are three airworthy Bristol Fighters in 2007, (and several replicas): 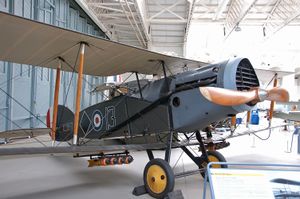 Substantially original aircraft are on static display at the:

Engineers at Rolls-Royce, Airbus and GKN Aerospace-Filton have also built a full-scale replica F.2B in celebration of 100 years of aircraft manufacture at Filton Bristol, where the original fighters were designed and built.[12]