British Forces Cyprus (BFC) is the name given to the British Armed Forces stationed in the UK sovereign base areas of Akrotiri and Dhekelia on the island of Cyprus. The United Kingdom retains a military presence on the island in order to keep a strategic location at the eastern end of the Mediterranean, for use as a staging point for forces sent to locations in the Middle East and Asia. BFC is a tri-service command, with all three services based on the island reporting to it. At present, there are approximately 3,500 personnel serving in Cyprus. 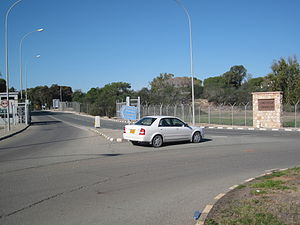 Following the establishment of the Republic of Cyprus in 1960, the UK retained two Sovereign Base Areas in Akrotiri and Dhekelia and an RAF air marshal was appointed as the Administrator of the Sovereign Base Areas. The following year the British Forces Near East organization was created, the command of which was then held concurrently with that of the post of Administrator.[1] On 1 March 1961 the Southern Group of Middle East Air Force became Near East Air Force and was based in Cyprus. By 1962 the title British Forces in Cyprus was in official use.[2]

Within British Forces Cyprus are a number of permanently based units; however, the large proportion of British forces in Cyprus are on operational tours:

The following officers have been in command of British Forces Cyprus:[6]
General Officer Commanding Cyprus District

Operation TOSCA is the name given to the British contribution to the United Nations Peacekeeping Force in Cyprus (UNFICYP). The British Contingent (BRITCON) numbers 278, and consists of three distinct parts:

One of the roles of the support units of BFC is to assist as needed the British units deployed with UNFICYP, which are not part of BFC, but are instead under the direct command of the United Nations.