The British Free Corps (German: Britisches Freikorps) was a unit of the Waffen SS during World War II consisting of British and Dominion prisoners of war who had been recruited by the Nazis. The unit was originally known as the Legion of St. George.[1] Research by British journalist/historian Adrian Weale[2] has identified 54 men[3] who belonged to this unit at one time or another, some for only a few days. At no time did it reach more than 27 men in strength – smaller than a contemporary German platoon.[4]

Apart from touting the idea of a British volunteer force, Amery also actively tried to recruit Britons. He made a series of pro-German propaganda radio broadcasts, appealing to his fellow countrymen to join the war on communism. After the war he was sentenced to death for high treason and hanged.[5]

The first recruits to the Corps came from a group of POWs at a 'holiday camp' set up by the Germans in Genshagen, a suburb of Berlin, in August 1943.[6] In November 1943 they were moved to a requisitioned café in the Pankow district of Berlin.[7] Recruits also came from an interrogation camp at Luckenwalde in late 1943.[8] The Corps became a military unit on 1 January 1944 under the name ‘The British Free Corps’[9] In the first week of February 1944, the BFC moved to the St Michaeli Kloster in Hildesheim, a small town near Hannover.[10] Uniforms were issued on 20 April 1944 (Hitler's 55th birthday).[11] On 11 October 1944 the Corps was moved to the Waffen-SS Pioneer school in Dresden, to start military training for service on the Eastern Front.[12] On 24 February 1945 they travelled from Dresden to Berlin, where they stayed in a requisitioned school on the Schönhauser Allee. [13] On 8 March 1945 they were moved to "the village of Niemeck, a few miles to the north-west of Berlin.[14] 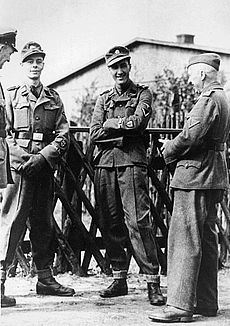 Recruiting for the Free Corps was done in German POW camps. In 1944, leaflets were distributed to the POWs, and the unit was mentioned in Camp, the official POW newspaper published in Berlin. The unit was promoted "as a thoroughly volunteer unit, conceived and created by British subjects from all parts of the empire who have taken up arms and pledged their lives in the common European struggle against Soviet Russia". The attempted recruitment of POWs was done amid German fear of the Soviets; the Germans were "victims of their own propaganda" and thought that their enemies were as worried about the Soviets as they were. In one Dutch camp, the POWs were lavished with cigarettes, fruit, and other items while listening to Nazi propaganda officers who described the good that the Germans were doing in Europe. At that time the officers asked the men to join in fighting the real enemy, the Soviets.[15]

The BFC did not have a 'commander' per se as it was the intention of the SS to appoint a British commander when a suitable British officer came forward. However three German Waffen-SS officers acted as the Verbindungsoffizier ("liaison officer") between the SS-Hauptamt Amtsgruppe D/3 which was responsible for the unit and the British volunteers, and in practice they acted as the unit commander for disciplinary purposes at least. These were:

A number of sources mention the involvement of Brigadier Leonard Parrington, a British Army officer captured by the Germans in Greece in 1941.[19] This was based on a misunderstanding by some of the British volunteers after Parrington in the summer of 1943 had visited the POW 'holiday camp' at Genshagen, in the southern suburbs of Berlin, as representative of the Senior British POW, Major General Victor Fortune. Parrington had told the assembled prisoners that he 'knew the purpose of the camp'[20] and the BFC volunteers who were there took this to mean that he approved of the unit. In reality, Parrington had accepted Genshagen at face value as a rest centre for POWs.

Leading members of the Corps included Thomas Haller Cooper (although he was actually 'an Unterscharführer in the Waffen-SS proper'[21]), Roy Courlander, Edwin Barnard Martin, Frank McLardy, Alfred Minchin and John Wilson – these men "later became known among the renegades as the ‘Big Six’, although this was a notional elite whose membership shifted periodically as members fell into, and out of, favour."[22]

In March of 1945, a BFC detachment was deployed with the 11th SS Volunteer Panzergrenadier Division Nordland under Brigadeführer Joachim Ziegler, which was composed largely of Scandinavian volunteers and attached to the III (Germanic) SS Panzer Corps under Obergruppenführer Felix Steiner. They were first sent from Stettin to the division's headquarters at Angermünde. "From there they were sent to join the divisional armoured reconnaissance battalion (11. SS-Panzer-Aufklärunsabteilung) located in Grüssow [on the island of Usedom]. The battalion commander was Sturmbannführer Rudolf Saalbach ... [The BFC were allocated] to the 3rd Company, under the command of the Swedish Obersturmführer Hans-Gösta Pehrson."[23] The BFC contingent was commanded by SS-Scharführer (squad leader) Douglas Mardon, who used the alias "Hodge." Richard W. Landwehr Jr. states "The Britons were sent to a company in the detachment that was situated in the small village of Schoenburg near the west bank of the Oder River" [24] On March 22, as the company was entrenching, it was partially overrun by an advance element of the Red Army which had blundered into its position by accident. Although taken by surprise, the SS troopers, including the BFC volunteers, quickly regained their wits and launched a vigorous counterattack, driving off the Soviets.[third-party source needed] On 16 April 1945 the Corps was moved to Templin, where they were to join the transport company of Steiner’s HQ staff (Kraftfahrstaffel StabSteiner).[25] When the Nordland Division left for Berlin, 'the transport company followed Steiner’s Headquarters to Neustrelitz and the BFC went with it.'[26] On 29 April Steiner decided 'to break contact with the Russians and order his forces to head west into Anglo-American captivity.'[27] On 2 May Thomas Haller Cooper and Fred Croft, the last two members of the Corps, surrendered to the 121st Infantry Regiment (United States) in Schwerin, and were placed in the loose custody of the GHQ Liaison Regiment (known as Phantom).[28]

Courts martial of those involved

Newspapers of the period give details of the court-martial of several Commonwealth soldiers involved in the corps. One Canadian captive, Private Edwin Barnard Martin, said he joined the corps "to wreck it". He designed the flag and banner used by the corps,[29] and admitted to being one of the original six or seven members of the Corps during his trial. He was given a travel warrant and a railway pass which allowed him to move around Germany without a guard.[30] He was found guilty of two charges of aiding the enemy while a prisoner of war.[31]

Another New Zealand soldier, Roy Courlander, claimed at his court-martial that he joined the corps for similar reasons, to gather intelligence on the Germans, to foster a revolution behind the German lines, or to sabotage the unit if the revolution failed.[32]

Several novels on the subject have been published.