Presidencies and provinces of British India 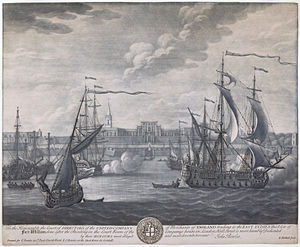 A mezzotint engraving of Fort William, Calcutta, the capital of the Bengal Presidency in British India 1735.

Provinces of India, earlier Presidencies of British India and still earlier, Presidency towns, were the administrative divisions of British governance in the subcontinent. In one form or other they existed between 1612 and 1947, conventionally divided into three historical periods.

Location of the Indian Empire (i. e. British India and the princely states).

In 1608, the English East India Company established a settlement at Surat (now in the state of Gujarat), and this became the company's first headquarters town. It was followed in 1611 by a permanent factory at Machilipatnam on the Coromandel Coast, and in 1612 the company joined other already established European trading companies in Bengal.[2] However, following the decline of the Mughal Empire in 1707 by the hands of the Marathas and after the East India Company's victory at the Battle of Plassey in 1757 and Battle of Buxar, both in Bengal 1764, the Company gradually began to formally expand its dominions and collectively call the area India.[3] By the mid-19th century, and after the three Anglo-Maratha Wars the East India Company had become the paramount political and military power in South Asia, its territory held in trust for the British Crown.[4]

Company rule in Bengal, however, ended with the Government of India Act 1858 following the events of the Bengal Rebellion of 1857.[4] From then known as British India, it was thereafter directly ruled by the British Crown as a colonial possession of the United Kingdom, and India was officially known after 1876 as the British Indian Empire.[5] India consisted of regions referred to as British India that were directly administered by the British, with Acts established and passed in the British Parliament, House of Commons.[6] and other regions, the Princely States,[7] that were ruled by local rulers of different ethnic backgrounds. These rulers were allowed a measure of internal autonomy in exchange for British suzerainty. British India constituted a significant portion of India both in area and population; in 1910, for example, it covered approximately 54% of the area and included over 77% of the population.[8] In addition, there were Portuguese and French exclaves in India. Independence from British rule was achieved in 1947 with the formation of two nations, the Dominions of India and Pakistan, the latter also including East Bengal, present-day Bangladesh.

The term British India also applied to Burma for a shorter time period: starting in 1824, a small part of Burma, and by 1886, almost two thirds of Burma had come under British India.[6] This arrangement lasted until 1937, when Burma commenced being administered as a separate British colony. British India did not apply to other countries in the region, such as Sri Lanka (then Ceylon), which was a British Crown colony, or the Maldive Islands, which were a British protectorate. At its greatest extent, in the early 20th-century, the territory of British India extended as far as the frontiers of Persia in the west; Afghanistan in the northwest; Tibet in the northeast; and China, French Indo-China and Siam in the east. It also included the Colony of Aden in the Arabian Peninsula.[9]

The four Grand Divisions of India

The four governmental divisions in 1851 consisted of:

The East India Company, which was incorporated on 31 December 1600, established trade relations with Indian rulers in Masulipatam on the east coast in 1611 and Surat on the west coast in 1612.[11] The company rented a trading outpost in Madras in 1639.[11][11] Bombay, which was ceded to the British Crown by Portugal as part of the wedding dowry of Catherine of Braganza in 1661, was in turn granted to the East India Company to be held in trust for the Crown.[11]

Meanwhile, in eastern India, after obtaining permission from the Mughal Emperor Shah Jahan to trade with Bengal, the Company established its first factory at Hoogly in 1640.[11] Almost a half-century later, after Emperor Aurengzeb forced the Company out of Hooghly, Calcutta was founded by Job Charnock in 1686.[11] By the mid-18th century the three principal trading settlements, now called the Madras Presidency (or the Presidency of Fort St. George), the Bombay Presidency, and the Bengal Presidency (or the Presidency of Fort William) were each administered by a Governor.[12]

After Robert Clive's victory in the Battle of Plassey in 1757, the puppet government of a new Nawab of Bengal, was maintained by the East India Company.[13] However, after the invasion of Bengal by the Nawab of Oudh in 1764 and his subsequent defeat in the Battle of Buxar, the Company obtained the Diwani of Bengal, which included the right to administer and collect land-revenue (land tax) in Bengal, the region of present-day Bangladesh, West Bengal and Bihar.[13] In 1772, the Company also obtained the Nizāmat of Bengal (the "exercise of criminal jurisdiction") and thereby full sovereignty of the expanded Bengal Presidency.[13] During the period, 1773 to 1785, very little changed; the only exceptions were the addition of the dominions of the Raja of Banares to the western boundary of the Bengal Presidency, and the addition of Salsette Island to the Bombay Presidency.[14]

The British Raj began with the idea of the Presidencies as the centres of government. Until 1834, when a General Legislative Council was formed, each Presidency under its Governor and Council was empowered to enact a code of so-called 'Regulations' for its government. Therefore, any territory or province that was added by conquest or treaty to a presidency came under the existing regulations of the corresponding presidency. However, in the case of provinces that were acquired but were not annexed to any of the three Presidencies, their official staff could be provided as the Governor-General pleased, and was not governed by the existing regulations of the Bengal, Madras, or Bombay Presidencies. Such provinces became known as 'Non-Regulation Provinces' and up to 1833 no provision existed for a legislative power existed in such places.[16] The same two kinds of management applied for districts. Thus Ganjam and Vizagapatam were non-regulation districts.[17] Non-Regulation Provinces included: 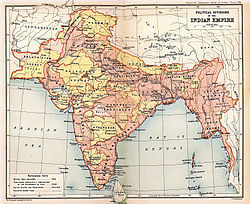 A map of the British Indian Empire in 1909 during the partition of Bengal (1905–1911), showing British India in two shades of pink (coral and pale) and the princely states in yellow.

In addition, there were a few minor provinces that were administered by a Chief Commissioner:[19]

At the time of independence in 1947, British India had 17 provinces:

Upon the Partition of British India into the Union of India and Dominion of Pakistan, 11 provinces (Ajmer-Merwara-Kekri, Andaman and Nicobar Islands, Bihar, Bombay, Central Provinces and Berar, Coorg, Delhi, Madras, Panth-Piploda, Orissa, and the United Provinces) joined India, 3 (Baluchistan, North-West Frontier and Sindh) joined Pakistan, and 3 (Punjab, Bengal and Assam) were partitioned between India and Pakistan.

In 1950, after the new Indian Constitution was adopted, the provinces in India were replaced by redrawn states and union territories. Pakistan, however, retained its five provinces, one of which, East Bengal, was renamed East Pakistan in 1956 and became the independent nation of Bangladesh in 1971.