Broadcasting is the distribution of audio and/or video content to a dispersed audience via any electronic mass communications medium, but typically one using the electromagnetic spectrum (radio waves), in a one-to-many model.[1] Broadcasting began with AM radio broadcasting which came into popular use starting with the invention of the crystal detector in 1906. Before this, all forms of electronic communication, radio, telephone, and telegraph, were "one-to-one", with the message intended for a single recipient. The term "broadcasting", borrowed from the agricultural method of sowing seeds in a field by casting them broadly about,[2] was coined by either KDKA manager Frank Conrad or RCA historian George Clark[3] around 1920 to distinguish this new activity of "one-to-many" communication; a single radio station transmitting to multiple listeners.

Over the air Broadcasting is usually associated with radio and television, though in practice radio and television transmissions take place using both wires and radio waves. The receiving parties may include the general public or a relatively small subset; the point is that anyone with the appropriate receiving technology can receive the signal. The field of broadcasting includes a wide range of practices, from relatively private exchanges such as public radio, community radio and commercial radio, public television, and commercial television.

U.S. Code of Federal Regulations, title 47, part 97 defines "broadcasting" as "transmissions intended for reception by the general public, either direct or relayed".[4] Private or two-way telecommunications transmissions do not qualify under this definition. For example, amateur ("ham") and citizens band (CB) radio operators are not allowed to broadcast. As defined, "transmitting" and "broadcasting" are not the same.

The earliest broadcasting consisted of sending telegraph signals over the airwaves, using Morse code. This was particularly important for ship-to-ship and ship-to-shore communication, but it became increasingly important for business and general news reporting, and as an arena for personal communication by radio amateurs (Douglas, op. cit.). Audio broadcasting began experimentally in the first decade of the 20th century. By the early 1920s radio broadcasting became a household medium, at first on the AM band and later on FM. Television broadcasting started experimentally in the 1920s and became widespread after World War II, using VHF and UHF spectrum. Satellite broadcasting was initiated in the 1960s and moved into general industry usage in the 1970s, with DBS (Direct Broadcast Satellites) emerging in the 1980s.

Historically, there have been several methods used for broadcasting electronic media audio and/or video to the general public:

There are several means of providing financial support for continuous broadcasting:

Broadcasters may rely on a combination of these business models. For example, in the United States, National Public Radio (NPR) and the Public Broadcasting Service (PBS, television) supplement public membership subscriptions and grants with funding from the Corporation for Public Broadcasting (CPB), which is allocated bi-annually by Congress.

US public broadcasting corporate and charitable grants are generally given in consideration of underwriting spots which differ from commercial advertisements in that they are governed by specific FCC restrictions, which prohibit the advocacy of a product or a "call to action". 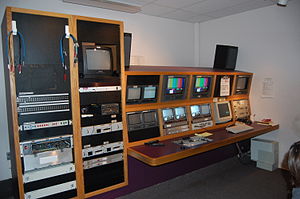 The first regular television broadcasts started in 1937. Broadcasts can be classified as "recorded" or "live". The former allows correcting errors, and removing superfluous or undesired material, rearranging it, applying slow-motion and repetitions, and other techniques to enhance the program. However, some live events like sports television can include some of the aspects including slow-motion clips of important goals/hits, etc., in between the live television telecast.

American radio-network broadcasters habitually forbade prerecorded broadcasts in the 1930s and 1940s requiring radio programs played for the Eastern and Central time zones to be repeated three hours later for the Pacific time zone (See: Effects of time on North American broadcasting). This restriction was dropped for special occasions, as in the case of the German dirigible airship Hindenburg disaster at Lakehurst, New Jersey, in 1937. During World War II, prerecorded broadcasts from war correspondents were allowed on U.S. radio. In addition, American radio programs were recorded for playback by Armed Forces Radio radio stations around the world.

A disadvantage of recording first is that the public may know the outcome of an event from another source, which may be a "spoiler". In addition, prerecording prevents live radio announcers from deviating from an officially approved script, as occurred with propaganda broadcasts from Germany in the 1940s and with Radio Moscow in the 1980s.

Many events are advertised as being live, although they are often "recorded live" (sometimes called "live-to-tape"). This is particularly true of performances of musical artists on radio when they visit for an in-studio concert performance. Similar situations have occurred in television production ("The Cosby Show is recorded in front of a live television studio audience") and news broadcasting.

A broadcast may be distributed through several physical means. If coming directly from the radio studio at a single station or television station, it is simply sent through the studio/transmitter link to the transmitter and hence from the television antenna located on the radio masts and towers out to the world. Programming may also come through a communications satellite, played either live or recorded for later transmission. Networks of stations may simulcast the same programming at the same time, originally via microwave link, now usually by satellite.

Distribution to stations or networks may also be through physical media, such as magnetic tape, compact disc (CD), DVD, and sometimes other formats. Usually these are included in another broadcast, such as when electronic news gathering (ENG) returns a story to the station for inclusion on a news programme.

The final leg of broadcast distribution is how the signal gets to the listener or viewer. It may come over the air as with a radio station or television station to an antenna and radio receiver, or may come through cable television[7] or cable radio (or "wireless cable") via the station or directly from a network. The Internet may also bring either internet radio or streaming media television to the recipient, especially with multicasting allowing the signal and bandwidth to be shared. 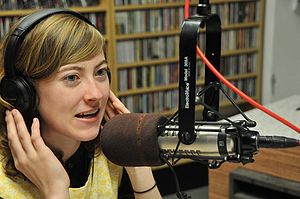 The sequencing of content in a broadcast is called a schedule. As with all technological endeavors, a number of technical terms and slang have developed. A list of these terms can be found at List of broadcasting terms. Television and radio programs are distributed through radio broadcasting or cable, often both simultaneously. By coding signals and having a cable converter box with decoding equipment in homes, the latter also enables subscription-based channels, pay-tv and pay-per-view services.

In his essay, John Durham Peters wrote that communication is a tool used for dissemination. Durham stated, "Dissemination is a lens—sometimes a usefully distorting one—that helps us tackle basic issues such as interaction, presence, and space and time...on the agenda of any future communication theory in general" (Durham, 211). Dissemination focuses on the message being relayed from one main source to one large audience without the exchange of dialogue in between. There's chance for the message to be tweaked or corrupted once the main source releases it. There is really no way to predetermine how the larger population or audience will absorb the message. They can choose to listen, analyze, or simply ignore it. Dissemination in communication is widely used in the world of broadcasting.

Broadcasting focuses on getting one message out and it is up to the general public to do what they wish with it. Durham also states that broadcasting is used to address an open ended destination (Durham, 212). There are many forms of broadcast, but they all aim to distribute a signal that will reach the target audience. Broadcasting can arrange audiences into entire assemblies (Durham, 213).

In terms of media broadcasting, a radio show can gather a large number of followers who tune in every day to specifically listen to that specific disc jockey. The disc jockey follows the script for his or her radio show and just talks into the microphone.[8] He or she does not expect immediate feedback from any listeners. The message is broadcast across airwaves throughout the community, but there the listeners cannot always respond immediately, especially since many radio shows are recorded prior to the actual air time.