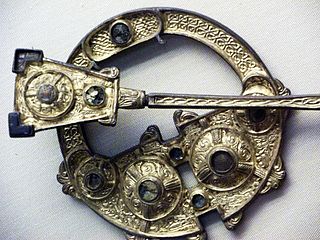 A brooch /ˈbroʊtʃ/ is a decorative jewelry item designed to be attached to garments, often to hold them closed. It is usually made of metal, often silver or gold but sometimes bronze or some other material. Brooches are frequently decorated with enamel or with gemstones and may be solely for ornament (as in the stomacher) or sometimes serve a practical function as a fastening, perhaps for a cloak.

The earliest known brooches are from the Bronze Age. As fashions in brooches changed rather quickly, they are important chronological indicators. Many sorts of European brooches found in archaeology are usually referred to by the Latin term fibula.

The fibula (plural fibulae) is an ornamental clasp used by Romans, Greeks, Germanic peoples and also by Celts and migratory tribes in Europe from the Early Bronze Age. They may have replaced fibulae made of more perishable Neolithic materials, such as bone to as late as 800 AD.[citation needed] Fibulae are useful type-objects: carefully catalogued local typologies, dating and distribution of fibulae can help date finds where neither numismatic nor ceramic materials provide a secure date. Fibulae were shaped somewhat like a large safety pin and were used to hold clothing together. They came in many varieties and held prominent significance for the identity of the wearer, indicating ethnicity (until local costume became Romanized) and class. Elaborately designed fibulae were an important part of Late Antique dress, and simpler ones were part of Roman military equipment.

The same types of fibulae can often be found on either side of the Roman limites, both among "Roman" and "barbarian" populations. The cultural interplay of elite objects designed to show status can be quite complex. For example, Lawrence Nees, Early Medieval Art[1] notes fibulae depicted in ivory diptychs of Stilicho and his entourage: 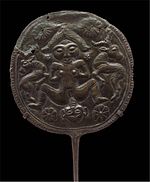 The type of fibula worn by Stilicho and his son, and by Turcius Secundus, occurs also among metal works of art commonly termed barbarian, as new Germanic figures usurped the symbols of imperial authority. It is likely that this type originated among Celtic groups and came to be adopted as an exotic fashion by Roman aristocrats, becoming 'naturalized' as an important Roman emblem, and then exported.

Ancient fibulae are prized items for collectors since they are well preserved in many cases and are not difficult to obtain; divorced from their cultural context, they still present a variety of shapes and decoration. 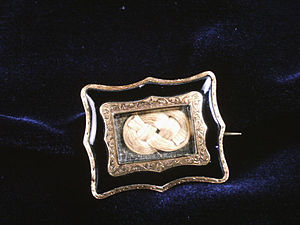 A hair brooch from the 19th century, in the collection of The Children's Museum of Indianapolis

A distinct tradition of penannular brooches and the related pseudo-penannular types developed in Early Medieval Ireland and Scotland, producing some of the most elaborately decorated brooches ever made, including the Tara Brooch.

From the eighteenth century through the Victorian era it was fashionable to incorporate hair and portraiture into a brooch.[2] The practice began as an expression of mourning, then expanded to keepsakes of loved ones who were living.[2] Human hair was encased within the brooch or braided and woven into a band to which clasps were affixed.[2] It was not uncommon for miniature brooch portraits to incorporate ground human hair as pigment.[2] Two sided swivel brooches would display a portrait on one side and a lock of hair on the other; the latter could be crafted with semiprecious stones to resemble a bouquet.[2]