Brookdale is an open-admission college, available to anyone 18 years of age or older, or anyone who is a high school graduate or holder of an equivalency diploma. It serves the residents of Monmouth County and surrounding communities. One in every three Monmouth County high school graduates attend Brookdale. The College offers Associate degrees in more than 60 programs, plus non-credit classes and certificate programs.

Main entrance to the campus from the Route 520 roundabout 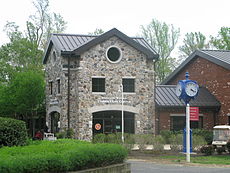 The Warner Student Life Center at the Lincroft campus

High Technology High School, a magnet school for students from Monmouth County, is located near the eastern edge of the Lincroft Campus. It is operated by the Monmouth County Vocational School District.

The Department of Athletics, Recreation, and Intramurals provides a diverse range of programs. Brookdale’s intercollegiate program is nationally recognized. The Jersey Blues teams compete in the Garden State Athletic Conference and in Region XIX of the National Junior College Athletic Association. The program has won six NJCAA Division III National titles: softball (2002, 2005 and 2010), women's soccer (2013 and 2014) and men's basketball (2013).

The Center for World War II Studies and Conflict Resolution is dedicated to fostering the study of the historical, political, social, economic, cultural and military aspects of the World War II era up through the Korean War. The Center examines the key events of the time; the political and military leaders who waged the wars, provided the leadership, made the peace; and those who served on the battlefield and home front.

On July 24, 2012, College President Peter F. Burnham, who had retired from a 20-year tenure after corruption allegations surfaced pleaded guilty to two indictable (felony) counts of official misconduct and one count of theft by deception in a plea agreement that called for a five year prison term.[2][3] Five months later, he was sentenced to a 5-year-prison-term and ordered to make financial restitution to the college.[4]