From Infogalactic: the planetary knowledge core
(Redirected from Brown coal)
Jump to: navigation, search
For other uses, see Lignite (disambiguation). 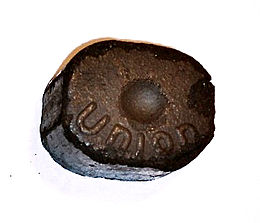 Lignite, often referred to as brown coal, is a soft brown combustible sedimentary rock formed from naturally compressed peat. It is considered the lowest rank of coal due to its relatively low heat content. It has a carbon content around 25-35%. It is mined all around the world and is used almost exclusively as a fuel for steam-electric power generation, but is also mined for its germanium content in China. As of 2014, about 12% of Germany's energy and, specifically, 27% of Germany's electricity comes from lignite power plants,[1] while in Greece, lignite provides about 50% of its power needs. 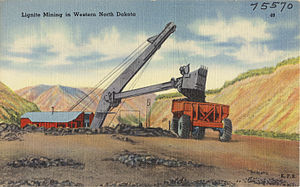 Lignite is brownish-black in color and has a carbon content around 25-35%, a high inherent moisture content sometimes as high as 66%, and an ash content ranging from 6% to 19% compared with 6% to 12% for bituminous coal.[2] 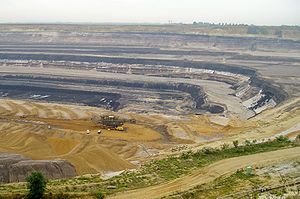 Lignite has a high content of volatile matter which makes it easier to convert into gas and liquid petroleum products than higher-ranking coals. Unfortunately, its high moisture content and susceptibility to spontaneous combustion can cause problems in transportation and storage. It is now known that efficient processes that remove latent moisture locked within the structure of brown coal will relegate the risk of spontaneous combustion to the same level as black coal, will transform the calorific value of brown coal to a black coal equivalent fuel, and significantly reduce the emissions profile of 'densified' brown coal to a level similar to or better than most black coals.[3] However, removing the moisture increases the cost of the final lignite fuel.

Because of its low energy density and typically high moisture content, brown coal is inefficient to transport and is not traded extensively on the world market compared with higher coal grades. It is often burned in power stations near the mines, such as in Australia's Latrobe Valley and Luminant's Monticello plant in Texas. Primarily because of latent high moisture content and low energy density of brown coal, carbon dioxide emissions from traditional brown-coal-fired plants are generally much higher per megawatt generated than for comparable black-coal plants, with the world's highest-emitting plant being Hazelwood Power Station, Victoria.[4] The operation of traditional brown-coal plants, particularly in combination with strip mining, can be politically contentious due to environmental concerns.[5][6]

Reaction with quaternary amine forms a product called amine-treated lignite (ATL), which is used in drilling mud to reduce fluid loss during drilling. 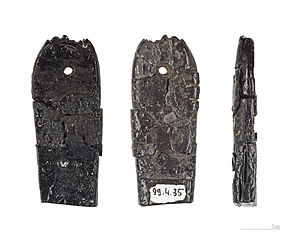 Lignite begins as an accumulation of partially decayed plant material, or peat. Burial by other sediments results in increasing temperature, depending on the local geothermal gradient and tectonic setting, and increasing pressure. This causes compaction of the material and loss of some of the water and volatile matter (primarily methane and carbon dioxide). This process, called coalification, concentrates the carbon content, and thus the heat content, of the material. Deeper burial and the passage of time result in further expulsion of moisture and volatile matter, eventually transforming the material into higher rank coals such as bituminous and anthracite coal.[7]

Lignite deposits are typically younger than higher-ranked coals, with the majority of them having formed during the Tertiary period.

The Latrobe Valley in the state of Victoria, Australia, contains estimated reserves of some 65 billion tonnes of brown coal.[8] The deposit is equivalent to 25% of known world reserves. The coal seams are up to 100 metres thick, with multiple coal seams often giving virtually continuous brown coal thickness of up to 230 metres. Seams are covered by very little overburden (10 to 20 metres).[8]

Lignite can be separated into two types. The first is xyloid lignite or fossil wood and the second form is the compact lignite or perfect lignite.

Although xyloid lignite may sometimes have the tenacity and the appearance of ordinary wood, it can be seen that the combustible woody tissue has experienced a great modification. It is reducible to a fine powder by trituration, and if submitted to the action of a weak solution of potash, it yields a considerable quantity of humic acid.[9] Leonardite is an oxidized form of lignite, which is also contains high levels of humic acid.[10]

Jet is a hardened, gem-like form of lignite used in various types of jewelry.