Bruno Pontecorvo (Russian: Бру́но Макси́мович Понтеко́рво, Bruno Maksimovich Pontekorvo; 22 August 1913 – 24 September 1993) was an Italian nuclear physicist, an early assistant of Enrico Fermi and then the author of numerous studies in high energy physics, especially on neutrinos. According to Oleg Gordievsky (the highest-ranking KGB officer ever to defect)[1] and Pavel Sudoplatov (former deputy director of Foreign Intelligence for the Soviet Union),[2] Pontecorvo was also a Soviet agent.[3] A convinced communist, he defected to the Soviet Union in 1950, where he continued his research on the decay of the muon and on neutrinos. The prestigious Pontecorvo Prize was instituted in his memory in 1995.

Pontecorvo was born in Marina di Pisa into a wealthy non-observant Italian Jewish family. After attending the first two years of Engineering at the University of Pisa, at only 18 he was admitted to the third year of Physics at the University of Rome La Sapienza. There he soon became one of the closest (and the youngest) assistants of Fermi and one of the so-called Via Panisperna boys (as Fermi's group of scientists is often called, after the name of the street where the Institute of Physics of Rome University was then situated). Fermi described Pontecorvo as "scientifically one of the brightest men with whom I have come in contact in my scientific career".[4]

In 1934 he contributed to Fermi's famous experiment showing the properties of slow neutrons that led the way to the discovery of nuclear fission.

Bruno Pontecorvo was the older brother of Gillo Pontecorvo, the director of The Battle of Algiers, as well as Guido Pontecorvo, a geneticist, and Poli Pontecorvo, an engineer who worked on radar after World War II.

In 1936 he moved to Paris to work in the laboratory of Irène and Frédéric Joliot-Curie on the effects of collisions of neutrons with protons and on the electromagnetic transitions among isomers. During this period he was influenced by the ideas of socialism to which he remained loyal for the rest of his life. In Paris, in 1938, he formed a relationship with Marianne Nordblom, a young student of French Literature, and their first son was born during that year. 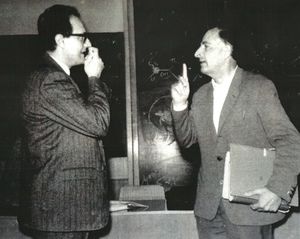 Pontecorvo was unable to return to Italy because of the Fascist regime's racial laws against the Jews. He remained in Paris until the Nazis entered the city, then fled with his family to Spain and shortly after to the United States, where he had found employment with an oil company in Tulsa, Oklahoma. While at the oil company he developed a technology and an instrument for well logging, based on the properties of neutrons. This technology may be considered the first practical application of the Via Panisperna boys discovery of slow neutrons.

He was not called upon to participate in the Manhattan Project in the USA for the construction of the atomic bomb, possibly because of his suspected Communist affiliations. But in 1943 he was invited to join the associated Montreal Laboratory in Canada, where he concentrated on reactor design, cosmic rays, neutrinos and the decay of muons.

In 1948, after he obtained British citizenship, he was invited by John Cockcroft to contribute to the British atomic bomb project at AERE, Harwell where he joined the Nuclear Physics Division under Egon Bretscher. In 1950 he was appointed to the chair of physics at the University of Liverpool which he was due to take up in January 1951.

However, on 31 August 1950, in the middle of a holiday in Italy, he abruptly left Rome for Stockholm with his wife and three sons without informing friends or relatives. The next day he was helped by Soviet agents to enter the Soviet Union from Finland. His abrupt disappearance caused much concern to many of the western intelligence services, especially those of Britain and the USA who were worried about the escape of atomic secrets to the Soviet Union after the then recent case of Klaus Fuchs. But as was pointed out immediately, Pontecorvo had had only limited access to "secret subjects" and even later no allegation of spying or of transferring of secrets to the Soviets has ever been made against him.

In the USSR Pontecorvo was welcomed with honor and given a number of privileges reserved only to the Soviet nomenklatura. He worked until his death in what is now the Joint Institute for Nuclear Research (JINR) in Dubna, concentrating entirely on theoretical studies of high energy particles and continuing his research on neutrinos and decay of muons. In recognition of his research he was awarded the Stalin Prize in 1953, membership of the Soviet Academy of Sciences in 1958 and two Orders of Lenin. In 1955 he appeared in public at a press conference where he explained to the world the motivations of his choice to leave the West and work in the USSR. Pontecorvo did not leave the Soviet Union for many years, the first trip being in 1978 when he travelled to Italy.

Pontecorvo was brother of film director Gillo Pontecorvo and geneticist Guido Pontecorvo. He was a great-uncle of Flavio Pontecorvo, the electronics engineer. He had one wife: Marianna Nordblom (born in Sweden) with whom he had three children, and a long-term relationship with Rodam Amiredzhibi (born in Georgia, Soviet Union).

He died in Dubna in 1993, afflicted by Parkinson's disease. Half of his ashes are now buried in the Protestant Cemetery in Rome, and another half in Dubna, Russia, according to his will.

In 1995, in recognition of his scientific merits, the prestigious Pontecorvo Prize has been instituted by the Joint Institute for Nuclear Research. The prize, awarded annually to an individual scientist, recognizes "the most significant investigations in elementary particle physics", as acknowledged by the international scientific community.

The scientific work of Bruno Pontecorvo is full of formidable intuitions, some of which have represented milestones in modern physics. These include:

This last idea was proposed in 1957 and developed in subsequent years by Pontecorvo, until 1967 where it was given its modern form. A hint for this phenomenon was first seen with solar neutrinos in 1968 (see Solar neutrino problem); the existence of the oscillations was finally established by the Super-Kamiokande experiment in 1998 and later confirmed by other experiments. This prediction was recognized by the 2015 Nobel Prize in physics, awarded to Takaaki Kajita and Arthur B. McDonald.