Budai or Pu-Tai[1][2] (Chinese: 布袋; pinyin: Bùdài), or 布袋 (Hotei) in Japanese,[3] Bố Đại in Vietnamese, is a Chinese folkloric deity. His name means "Cloth Sack,"[3] and comes from the bag that he is conventionally depicted as carrying. He is usually identified with or seen as an incarnation of Maitreya, the future Buddha, so much so that the Budai image is one of the main forms in which Maitreya is depicted in China.[3] He is almost always shown smiling or laughing, hence his nickname in Chinese, the Laughing Buddha (Chinese: 笑佛; pinyin: Xiào Fó).[1][3][4] In the West, the image of Budai is often mistaken for Gautama Buddha, and is hence called the Fat Buddha (Chinese: 胖佛; pinyin: Pàng Fó).[5]

Budai is traditionally depicted as an obese, bald man wearing a robe[1][4][6] and wearing or otherwise carrying prayer beads. He carries his few possessions in a cloth sack,[4] being poor but content. He is often depicted entertaining or being followed by adoring children.[3] His figure appears throughout Chinese culture as a representation of contentment.[4]

According to Chinese history, Budai was an eccentric Chán monk (Chinese: 禅; pinyin: chán)[7] who lived in China during the Later Liang (907–923 AD). He was a native of Zhejiang, and his Buddhist name was Qieci (Chinese: 契此; pinyin: qiècǐ; literally: "Promise this").[2] He was considered a man of good and loving character.[3]

Budai is often conflated with the historical Buddha, Siddhartha Gautama,[2][8][9] in spite of the distinct visual differences in how each has been depicted. In India, Nepal, and throughout southeast Asia, Gautama (who lived during the 6th century BC) is commonly depicted as being tall and slender in appearance. In contrast, in China and those areas to which Chinese cultural influence spread, the depiction of Budai (who lived during the 10th century AD) is consistently short and round.[10] 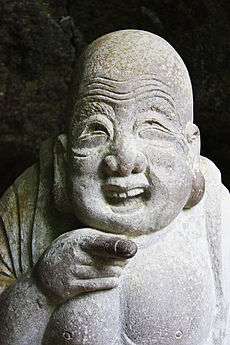 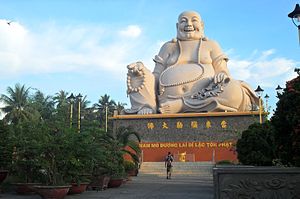 Some Buddhist traditions consider him a Buddha or a bodhisattva, often identifying him with Maitreya (the future Buddha).[1][4][6][11]

His identification with the Maitreya is attributed to a Buddhist hymn (Chinese: 偈语; pinyin: jìyǔ) he uttered before his death:[12]

Maitreya, the true Maitreya
has billions of incarnations.
Often he is shown to people at the time;
other times they do not recognize him.

Budai in folklore is admired for his happiness, plenitude, and wisdom of contentment. One belief popular in folklore maintains that rubbing his belly brings wealth, good luck, and prosperity.

In Japan, Hotei persists in folklore as one of the Seven Lucky Gods (Shichi Fukujin) of Taoism.[6]

Statues of Budai form a central part of I Kuan Tao shrines, where he is usually referred to by the Sanskrit name Maitreya.[13] According to I Kuan Tao, he represents many teachings, including contentment, generosity, wisdom and open kindheartedness.[13] He is predicted to succeed Gautama Buddha as the next Buddha, and helps people realize the essence within, which connects with all beings. 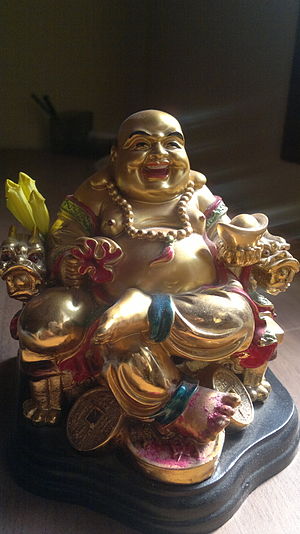 The primary story that concerns Budai in Zen (Chán) is a short kōan.[14][15] In it, Budai is said to travel giving candy to poor children, only asking a penny from Zen monks or lay practitioners he meets. One day a monk walks up to him and asks, "What is the meaning of Zen?" Budai drops his bag. "How does one realize Zen?" Budai then takes up his bag and continues on his way.[3][14]

Many versions of the Ten Bulls feature Hotei in the tenth picture.[3]

Conflation with other religious figures

Angida was one of the original eighteen Arhats of Buddhism. According to legend, Angida was a talented Indian snake catcher whose aim was to catch venomous snakes to prevent them from biting passers-by. Angida would also remove the snake's venomous fangs and release them. Due to his kindness, he was able to attain bodhi.

In Chinese art, Angida is sometimes portrayed as Budai, being rotund, laughing, and carrying a bag.[7]

In Thailand, Budai is sometimes confused with another similar monk widely respected in Thailand, Phra Sangkajai or Sangkachai (Thai: พระสังกัจจายน์). Phra Sangkajai, a Thai rendering of Maha Kaccana or Mahakaccayanathera (Thai: มหากัจจายนเถระ), was a Buddhist Arhata (in Sanskrit) or Arahant (in Pali) during the time of the Lord Buddha. Lord Buddha praised Phra Sangkadchai for his excellence in explaining sophisticated dharma (or dhamma) in an easily and correctly understandable manner. Phra Sangkajai (Maha Kaccana) also composed the Madhupinadika Sutra (Madhupindika Sutta MN 18).

One tale of the Thai folklore relates that he was so handsome that once even a man wanted him for a wife. To avoid a similar situation, Phra Sangkadchai decided to transform himself into a fat monk. Another tale says he was so attractive that angels and men often compared him with the Buddha. He considered this inappropriate, so disguised himself in an unpleasantly fat body.[citation needed] 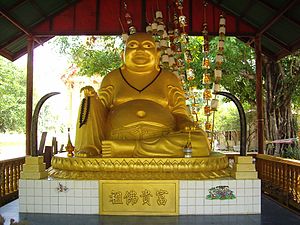 The famous Benihana "Tiki Mug", used for various exotic cocktails, has become collectible. (This mug is known as Hotei.)

Benihana's famous figural "tiki mugs" for exotic cocktails, the most common of which depicts Hotei, have become collectible.[16]