The Budapest Memorandum on Security Assurances is a political agreement signed in Budapest, Hungary on 5 December 1994, providing security assurances by its signatories relating to Ukraine's accession to the Treaty on the Non-Proliferation of Nuclear Weapons. The Memorandum was originally signed by three nuclear powers, the Russian Federation, the United States of America, and the United Kingdom. China and France gave somewhat weaker individual assurances in separate documents.[1]

The memorandum included security assurances against threats or use of force against the territorial integrity or political independence of Ukraine, as well as those of Belarus and Kazakhstan. As a result, Ukraine gave up the world's third largest nuclear weapons stockpile between 1994 and 1996,[2][3] of which Ukraine had physical if not operational control.[4][5] The use of the weapons was dependent on Russian-controlled electronic Permissive Action Links and the Russian command and control system.[4][5]

Following the annexation of Crimea by the Russian Federation in 2014, the US,[6][7] Canada,[8] the UK,[9] along with other countries,[10] stated that Russian involvement is a breach of its obligations to Ukraine under the Budapest Memorandum, a Memorandum signed by Sergei Lavrov,[11] and in violation of Ukrainian sovereignty and territorial integrity. Russia stated that the Budapest Memorandum does not apply to the 2014 annexation, stating that it was driven by an internal political and social-economic crisis. Russia stated it was never under obligation to "force any part of Ukraine's civilian population to stay in Ukraine against its will." Russia suggested that the US was in violation of the Budapest Memorandum, describing the Euromaidan as a "US-instigated coup".[12]

According to the memorandum, Russia, the U.S., and the UK confirmed, in recognition of Ukraine becoming party to the Treaty on the Non-Proliferation of Nuclear Weapons and in effect abandoning its nuclear arsenal to Russia, that they would:

Under the agreement, the signatories offered Ukraine "security assurances" in exchange for its adherence to the Treaty on the Non-Proliferation of Nuclear Weapons. The memorandum bundled together a set of assurances that Ukraine already held from the Conference on Security and Co-operation in Europe (CSCE) Final Act, United Nations Charter and Non-Proliferation Treaty.[1] The Ukrainian government nevertheless found it valuable to have these assurances in a Ukraine-specific document.[16][17]

The Budapest Memorandum was negotiated at political level, though it is not entirely clear whether the instrument is devoid entirely of legal provisions. It refers to assurances, but it does not impose a legal obligation of military assistance on its parties.[1][17] According to Stephen MacFarlane, a professor of international relations "It gives signatories justification if they take action, but it does not force anyone to act in Ukraine."[16] In the U.S. neither the George H. W. Bush administration nor the Clinton administration was prepared to give a military commitment to Ukraine, nor did they believe the U.S. Senate would ratify an international treaty, so the memorandum was adopted in more limited terms.[17] The memorandum does indicate a requirement of consultation among the parties "in the event a situation arises that raises a question concerning the[...] commitments" set out in the memorandum.[18] Whether or not the memorandum sets out legal obligations, the difficulties that Ukraine has encountered since early 2014 may cast doubt on the credibility of future security guarantees offered in exchange for non-proliferation commitments.[19]

In 1990, Meshkov was elected as a deputy to the Supreme Council of Crimea (the republic's parliament). There he became the co-founder of the RDK Party (Republican movement of Crimea). In 1994, he stood at the helm of the electoral bloc "Rossiya" for the republican presidential elections, where he easily defeated in the second round of elections Mykola Bahrov who ran as an independent. At that time, Bahrov was the head of the Supreme Council of Crimea. During the second round of the 1994 Crimean presidential elections, Meshkov won with 72.9 percent of the vote, and was elected as the republic's only president.[20][21]

Meshkov's main political platform was to facilitate much closer relationships with the Russian Federation up to the possible annexation of Crimea by Russia.[citation needed] He tried to initiate a military-political union with Russia and completely disregarded opinions of the Ukrainian government.[citation needed] He also tried to force the circulation of the Russian currency,[clarification needed] issue foreign passports to the Ukrainian population, and even transfer Crimea to the same time zone as Moscow. Due to the unforeseen resistance of the local opposition, Meshkov only managed to put his autonomous republic into Moscow's time zone. He also appointed the Russian economist Yevgeny Saburov as vice prime-minister; Saburov virtually became the head of the government.[citation needed] Other government officials[who?] disputed the appointment, arguing that Saburov could not hold the position because he did not have a Ukrainian passport.[citation needed] Saburov was forced to resign. After that he[who?] managed to paralyze the work of the Supreme Council of Crimea.[citation needed]

In 2003, Russian construction efforts were seen as an attempt to annex Tuzla Island off the Crimean coast of Ukraine.[2][dead link] The Russian threat to Tuzla led to the Ukrainian leadership appealing to NATO for consultations on security, as outlined in the 1997 NATO-Ukraine Charter, without result.[2] The dispute led to negotiations over delimitation of the maritime borders. In a 2012 preliminary agreement, Ukraine and Russia agreed that Tuzla Island would be considered Ukraine's territory.[24][needs update]

A political dispute between the Russian Federation and Ukraine started soon after the Orange Revolution in 2005. Partially as part of the dispute, the regime of Viktor Yanukovych convicted the former prime-minister of Ukraine Yulia Tymoshenko in abuse of power. It also led to signing of the Kharkiv Pact which for a speculated gas discount Ukraine extended the stay of the Russian Black Sea Fleet in Sevastopol and Crimea. Shortly after the March 2014 annexation of Crimea by the Russian Federation, Russia unilaterally terminated the treaty on 31 March 2014.

The government of Belarus said that American sanctions were in breach of the Memorandum; the United States government responded that, although not binding, the Memorandum is compatible with its work against human rights violations in eastern Europe.[25] 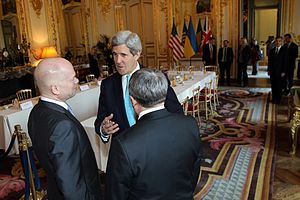 In February 2014, Russian forces seized or blockaded various airports, as well as other strategic sites throughout Crimea.[26] The troops were attached to the Russian Black Sea Fleet stationed in Crimea,[27] likely placing Russia in violation of the Budapest Memorandum. The Russian Foreign Ministry has confirmed the movement of armoured units attached to the Black Sea Fleet in Crimea, but asserts that they are acting within the scope of the various agreements between the two countries. Other official Russian sources deny that the units in the area of Sevastopol International Airport, specifically, are attached to the Black Sea Fleet.[28] Russia responded by supporting a referendum on whether the Crimea should join the Russian Federation. Russia announced the referendum was being conducted by 'local forces'. On 16 March, Russia annexed Crimea. Ukraine vigorously protested the action as a violation of Article 1 of the Budapest Memorandum. However, Russian troops were in Sevastopol from the earliest stages of the secession movement, they had been there for years under a treaty arrangement by which Ukraine allowed Russia to station forces there.[29]

In response to the crisis, the Ukrainian parliament has requested that the Memorandum's signatories reaffirm their commitment to the principles enshrined in the political agreement, and further asked that they hold consultations with Ukraine to ease tensions.[30]

On 24 March 2014, Canadian Prime Minister Stephen Harper led the rest of the G7 partners at an ad-hoc meeting during the Nuclear Security Summit in The Hague to suspend Russian membership, partially, said Harper, because Russia had violated the Budapest Memorandum. He said that Ukraine had given up its nuclear weapons "on the basis of an explicit Russian guarantee of its territorial integrity. By breaching that guarantee, President Putin has provided a rationale for those elsewhere who needed little more than that already furnished by pride or grievance to arm themselves to the teeth." Harper also indicated support for Ukraine by saying he would work with the new Ukrainian government towards a free trade agreement. Ukrainian-Canadians make up roughly 3.3% of the population of Canada.[31]

Russia accused Western governments of violating the pledge to respect the political independence of Ukraine by "financing a coup d'etat" that ousted President Viktor Yanukovich.[32][33]