Buddha's Birthday (Chinese: 佛誕; Hindi: बुद्ध जयन्ती; Vietnamese: Phật Đản) the birthday of the Prince Siddhartha Gautama, is a holiday traditionally celebrated in Mahayana Buddhism. According to the Theravada Tripitaka scriptures[which?] (from Pali, meaning "three baskets"), Gautama was born in Lumbini in modern-day Nepal, around the year 563 BCE, and raised in Kapilavastu.[2][3]

According to this legend, briefly after the birth of young prince Gautama, an astrologer named Asita visited the young prince's father—King Śuddhodana—and prophesied that Siddhartha would either become a great king or renounce the material world to become a holy man, depending on whether he saw what life was like outside the palace walls.

Śuddhodana was determined to see his son become a king, so he prevented him from leaving the palace grounds. But at age 29, despite his father's efforts, Gautama ventured beyond the palace several times. In a series of encounters—known in Buddhist literature as the four sights—he learned of the suffering of ordinary people, encountering an old man, a sick man, a corpse and, finally, an ascetic holy man, apparently content and at peace with the world. These experiences prompted Gautama to abandon royal life and take up a spiritual quest.

The exact date of Buddha's Birthday is based on the Asian lunisolar calendars and is primarily celebrated in Vaisakha month of the Buddhist calendar and the Hindu calendar, and hence it is also called Vesak. In Nepal, which is considered the birth-country of Buddha, it is celebrated on the full moon day of the Vaisakha month of the Hindu calendar. In Theravada countries following the Buddhist calendar, it falls on a full moon Uposatha day, typically in the 5th or 6th lunar month. In China and Korea, it is celebrated on the eighth day of the fourth month in the Chinese lunar calendar. The date varies from year to year in the Western Gregorian calendar, but usually falls in April or May. In leap years it may be celebrated in June.

In Nepal and neighboring South-east Asian countries, Buddha's birthday is celebrated on the full moon day of the Vaisakha month of the Buddhist calendar and the Hindu calendar, which usually falls in April or May month of the Western Gregorian calendar. The festival is known as Buddha Purnima, as Purnima means full moon day in Sanskrit. It is also called is Buddha Jayanti, with Jayanti meaning birthday in Nepali and Hindi.

In 1999 the Taiwanese government set Buddha's birthday as the second Sunday of May, the same date as Mother's Day.[4][5]

Celebrations in each country

In Nepal, Buddha's birthday is celebrated on the full moon day of May. The festival is known by various names, Buddha Jayanti, Buddha Purnima, Vaishakh Purnima and Vesak. Purnima means full moon day in Sanskrit. Among the Newars of Nepal, the festival is known as Swānyā Punhi (स्वांया पुन्हि), the full moon day of flowers.[6] The day marks not just the birth of Shakyamuni Gautam Buddha but also the day of his Enlightenment and Mahaparinirvana. But as a gentle effect of the West, the event of the birth is given paramount importance.

The event is celebrated by gentle and serene fervour, keeping in mind the very nature of Buddhism. People, especially women, go to common Viharas to observe a rather longer-than-usual, full-length Buddhist sutra, as something like a service. The usual dress is pure white. Non-vegetarian food is normally avoided. Kheer, a sweet rice porridge is commonly served to recall the story of Sujata, a maiden who, in Gautama Buddha's life, offered the Buddha a bowl of milk porridge after he had given up the path of asceticism following six years of extreme austerity. This event was one major link in his enlightenment.

It is said that the Buddha originally followed the way of asceticism to attain enlightenment sooner, as was thought by many at that time. He sat for a prolonged time with inadequate food and water, which caused his body to shrivel so as to be indistinguishable from the bark of the tree that he was sitting under. Seeing the weak Siddhartha Gautama, a girl named Sujata placed a bowl of milk in front of him as an offering. Realising that without food one can do nothing, the Buddha refrained from harming his own body.

Buddha Purnima or Tathagata is celebrated in India, especially in Sikkim, Ladakh, Arunachal Pradesh, Bodh Gaya, various parts of North Bengal such as Kalimpong, Darjeeling, and Kurseong, and Maharashtra (where 73% of total Indian Buddhists stay) and other parts of India as per Indian calendar. Buddhist People go to common Viharas to observe a rather longer-than-usual, full-length Buddhist sutra, as something like a service. The usual dress is pure white. Non-vegetarian food is normally avoided. Kheer, a sweet rice porridge is commonly served to recall the story of Sujata, a maiden who, in Gautama Buddha's life, offered the Buddha a bowl of milk porridge. Informally called "Buddha's Birthday", it actually commemorates the birth, enlightenment (nirvāna), and death (Parinirvāna) of Gautama Buddha in the Theravada tradition. 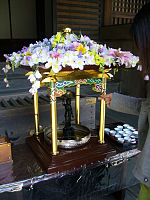 In Japan, Buddha's birth is also celebrated according to the Buddhist calendar but is not a national holiday. On this day, all temples hold Kanbutsu-e (Japanese: 灌仏会), 降誕会 (Gōtan-e), 仏生会 (Busshō-e), 浴仏会 (Yokubutsu-e), 龍華会 (Ryūge-e), 花会式 (Hana-eshiki) or 花祭(Hana-matsuri, meaning 'Flower Festival'). The first event was held at Asuka-dera in 606. Japanese people pour ama-cha (a beverage prepared from a variety of hydrangea) on small Buddha statues decorated with flowers, as if bathing a newborn baby. 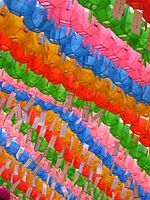 In Korea, the birthday of Buddha is celebrated according to the Lunisolar calendar. This day is called 석가탄신일 (Seokga tansinil), meaning "Buddha's birthday" or 부처님 오신 날 (Bucheonim osin nal) meaning "the day when the Buddha came". Lotus lanterns cover the entire temple throughout the month which are often flooded down the street. On the day of Buddha's birth, many temples provide free meals and tea to all visitors. The breakfast and lunch provided are often sanchae bibimbap.

This is one of the major festivals in Sri Lanka. It is celebrated on the first full moon day of the month of May. People engage in religious observances and decorate houses and streets with candles and specially made paper lanterns. some stores give out free meals for people. In specific places, there are buildings made out of light bulbs but from a distance it represents pictures from the Buddha's life. They are called vesak thorun (Pandals). People sing songs called "bhakthi geetha".

From 1958 to 1975, Lễ Phật Đản, the birthday of Buddha (on the 8th day of the 4th month in the Chinese lunar calendar) is recognized as a national public holiday in South Vietnam,[7] is more than just a festival enjoyed only among Buddhists with float and lantern parade on the streets.

Celebration of Buddha's Birthday in the United States differ from community to community, depending on ethnicity and nationality.

The Japanese celebration on 8 April has been significant in the Bay Area for some decades. In 1968 the first circumambulation of Mt. Tamalpais to celebrate Buddha's Birthday was conducted. Starting in 1969 at Tassajara Zen Mountain Center, Hana-Matsuri was celebrated each spring. Dressed in formal black robes, the roughly 70 monks and students formed a formal procession to the Horse Pasture with the leader periodically ringing a small, clear bell. A temporary stone altar was built under a huge oak tree in a gorgeous field of green grass and abundant wildflowers; a small statue of a baby Buddha was placed upon it in a metal basin. Then each person would in turn approach the altar, ladle one thin-lipped bamboo dipperful of sweet green tea over the statue, bow, and walk to one side.

The Buddha's Birthday is celebrated at Nan Tien Temple in Wollongong Australia and other temples in the Fo Guang Shan Nan Tien Temple group in Australia on the eighth day of the fourth month of the China lunar calendar.[8] In Brisbane there is a weekend-long Buddha Birthday Festival which draws over 200 000 visitors.[9] In Melbourne, the weekend-long Festival is called Buddha's Day and Multicultural Festival. It is held at Federation Square around Apr/May.[10]

Some places have a public holiday one week later, on the fifteenth day of the fourth month in the Chinese Lunar Calendar, to coincide with the full moon. The names for this festival vary with each country, for instance Visakha Puja in Thailand or Lễ Phật đản in Vietnam. In some countries it is a public holiday.