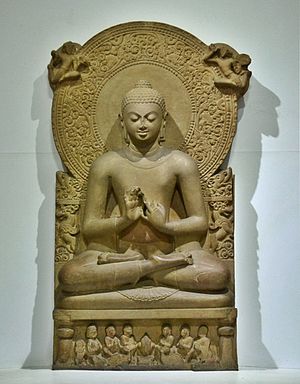 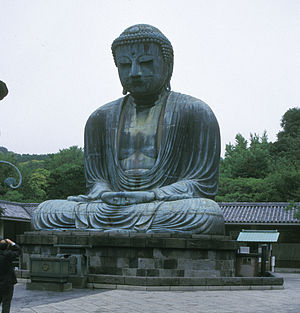 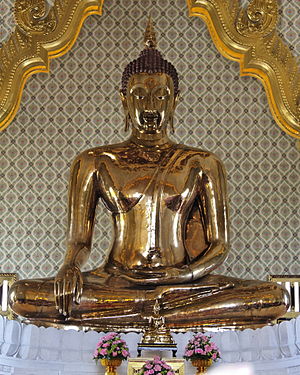 Buddharūpa (बुद्धरूप, literally, "Form of the Awakened One") is the Sanskrit and Pali term used in Buddhism for statues or models of the Buddha.

Despite cultural and regional differences in the interpretations of texts about the life of Gautama Buddha, there are some general guidelines to the attributes of a Buddharupa:

The elongated earlobes are vestiges of his life as a prince, when he wore extravagant jewellery. The bump at the top of the head is the ushnisha and represents spirituality, wisdom, and awakening.[1]

From a gaunt, seated ascetic to a laughing big-bellied wanderer, depictions of the Buddha vary widely across cultures.

The image of the Buddha started to emerge from the 1st century CE in Northern India, developed in Gandhara and Mathura. The art of Gandhara was influenced by Greek art leading to the development of Greco-Buddhist art with anatomically well-proportioned and realistic figure of Buddha. One of the most influential Buddhist art was the Gupta art and the later Amaravati style. From India the depiction of Buddha spread to the rest of Asia. The Buddharupas of India, Sri Lanka, Javanese Sailendra art in Indonesia, and Khmer art of Cambodia usually depict a well proportioned figure, but sometimes he is shown emaciated, in recollection of the Buddha's years of ascetic practices. Japanese Buddharupas are often very square and stolid, while Indian and Southeast Asian ones often have thinner figures.[citation needed]

Many people may be familiar with the "Happy" or "Laughing" Buddharupa, a different historical figure, who should not be confused with the images of Gautama Buddha. Budai a Chinese Buddhist monk also known as Hotei, is depicted as fat and happy, often travelling or bearing wealth.[citation needed]

Other times he is holding various symbolic objects, or making symbolic mudras (gestures).

The clothing also varies; in China and Japan, where it is considered socially improper for monks and nuns to expose the upper arm, the Buddharupa has a tunic and long sleeves, much like the traditional monks and nuns, while in India they are often topless.[citation needed]